A step-by-step guide to creating a home network using a wireless router to connect your home entertainment, office equipment and smart appliances. 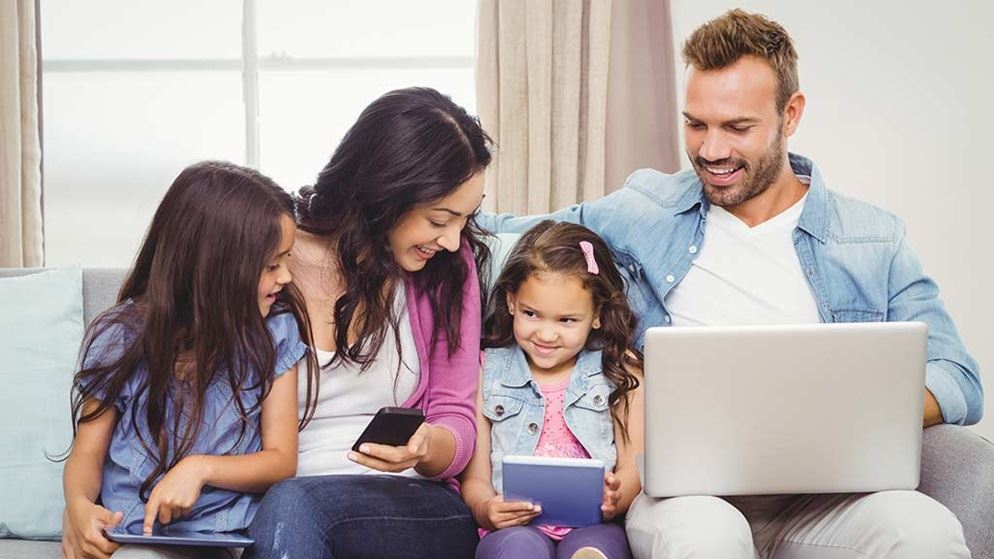 It wasn't that long ago that most of our home entertainment involved listening to radio, watching free-to-air TV (five channels), or enjoying music and movies on tape or vinyl. Digital technology changed all of that, and today – thanks to the internet and the ability to create a home network – everything has changed again.

Not only are there games consoles for fun and laptops for work, we also want to browse the internet from the comfort of the lounge, stream a movie on the smart TV, and control everything using our smartphone, tablet or voice-controlled smart speaker.

You'll need a smartphone to control most networked appliances. Find the right model in our smartphone test.

Why should I network my home?

This all comes down to ease of access and streamlining control over devices in your house. A fully-networked home opens up three key timesavers:

How do I set up a home network?

The first step in plugging it all together (assuming you have a separate modem and router) is to identify the 'WAN' (wide area network) port on the router, which looks the same as the others but is intended only for your modem. It's usually labelled and colour-coded differently too so it's easy to pick out. The other ports are for your wired devices which can generally be attached in any order.

Think about what equipment you want to attach to the network, and where it will be.

The modem, for example, may be constrained by an existing phone port, which is often not in the centre of your home. And it's a good idea to have the modem and router (and any equipment that will attach directly to the router) together. But if you are using wireless, the router is best positioned near the centre of the house where its signal can reach the rest of the home without too much trouble. If this isn't possible, you may have to add a modem access point at the other end of the home.

How do I connect my devices to the network?

First things first, you need to pick your connection method:

A combination of these options is ideal, however, Wi-Fi will suit almost all situations, provided you don't require excessive bandwidth 24/7.

There are several versions of Wi-Fi and any devices you have such as a smartphone or iPod will indicate its transfer speed as either 802.11a, b, g or n – this is usually specified on the product box.

Most networked devices have a Wi-Fi adapter built in, but if you have a desktop computer without Wi-Fi, you can simply purchase a wireless USB adapter or a plug-in card.


Do I need a router?

For home networking, you'll need a router to direct your content to the various devices throughout your home. This is different to a modem.

Try to find a dual or tri-band modem/router. These support faster speeds, greater bandwidth and can handle the strain of multiple devices connecting at once (to a point). This is particularly important in a shared household.

You might have also heard the term 'switch' in relation to networking. A switch is much simpler than a router, but it has one important advantage: it can handle mixed speed networks.

Check out our router report for more information on your options.

How can I expand my network?

We are living in an increasingly wireless world, but there are still devices that need a physical network cable, such as computers and devices like printers and networked attached storage (NAS) hard drives. Wired device connections are limited to the number of Ethernet ports on the back of your router – which is usually four.

How do I link my devices to one another?

These days, most network capable devices from home entertainment to kitchen appliances, can automatically detect, and connect to, your network. This requires some sort of app or desktop program, but it can generally save you the hassle of having to tinker with IP addresses and so on. Many media streaming devices use DLNA, for example. Just make sure your connection device and smart appliance are on the same network.

That said, there are times when a bit more work is required, which is why its worth brushing up on basic networking, before you dive in. There was a time when Macs and Windows machines didn't play that nicely together, but the latest operating systems are pretty good at recognising each other and tolerating one another on the same network.

You'll usually access the router control panel through a browser by typing in the IP address for the router. It's almost always 192.168.1.1 or 192.168.0.1. Similarly, the default login is often "admin" for user and "password" for password, but again, check the manuals. Remember, once you have set everything up make sure you change the username and password.

New to home automation? Learn the basics in our buying guide.

The Digital Living Network Alliance (DLNA) protocol was introduced to help simplify the process of sharing content around the home, allowing connected devices to "talk" to one another as seamlessly as possible over a wireless or wired network.

A look at your TV's network settings will confirm whether it has DLNA support, and it may even connect to your smart device automatically. Once selected, you can access music, photos and video by using the TV remote control.

How can I keep my network secure?

Getting a wireless network up and running in your home is simple; keeping it secure from unwanted eyes takes a little more effort.

You should first change the default password and administrator login name when setting up your wireless router. Depending on the router, the passwords can be as simple as "password" or "1234" and the user name "admin" or "user". The default security names could also be the name of the product, such as NETGEAR or Linksys. These may be easy for you to remember, but they are also easy for potential freeloaders or hackers to crack when searching for unsecured Wi-Fi connections.