Is your Indigenous souvenir the real deal?

When it comes to the Aboriginal souvenir trade, copies, imports and confusion abound. But there are ways to tell if an item is authentic. 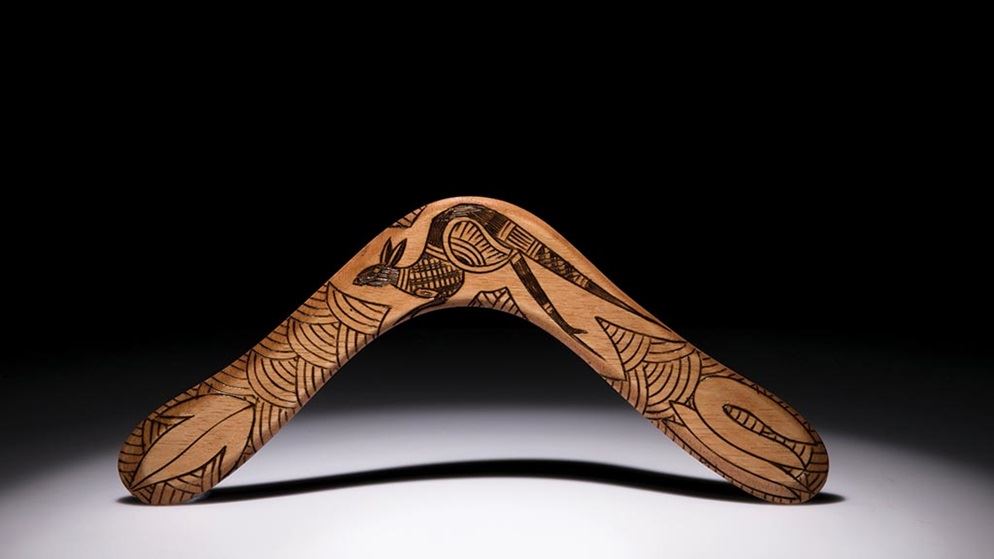 Have you ever seen a boomerang called a "bent stick"? Or a dot painting on a tea towel that was made in China? What about a didgeridoo made from bamboo and painted in Indonesia? Welcome to the murky cultural wars of Indigenous-'style' souvenirs.

For consumers, inauthentic products are confusing and a rip-off, but they also harm the world's oldest living culture.

This article looks at ways you can spot a fake, speaks to Indigenous artist Glen Timbery and reveals the result of our mystery shop. It also raises the question: can you tell which boomerang is 100% made in Australia?

Help us put pressure on the government to protect people from dodgy or dangerous products. Sign our petition for stronger consumer protections.

Sharing Indigenous art and artefacts is a way for Australia's First People to connect with other cultures and bridge misunderstanding. That relationship is exploited when artists aren't paid and important cultural ideas are copied or misrepresented and ultimately diminished.

It's estimated that millions of dollars will be spent on souvenirs during the Commonwealth Games, with the Arts Law Centre of Australia saying 80% of Aboriginal-style souvenirs in tourist shops are 'fake' or 'inauthentic'.

Queensland Fair Trading says it will crack down on souvenir sellers who breach Australian Consumer Law and mislead consumers into believing a product is 'authentic' or 'genuine' when it's not. Meanwhile, the ACCC has launched action against souvenir wholesaler Birubi for misleading consumers with descriptors such as 'hand painted', 'handcrafted', 'Aboriginal Art' and 'Australia' when they were, in fact, made in Indonesia.

"The souvenir industry, especially the Aboriginal art section, definitely needs a torch on it," says Joe Skeen, founder of Murra Wolka, a 100% Aboriginal-owned business which makes ethical souvenirs and pays each artist by the piece.

Skeen says many souvenirs are made in Indonesia or China and believes all imports should either be banned or clearly display a country of origin label to show what's made overseas and what's made in Australia.

What's in a label?

If a souvenir doesn't have a label to explain where it's from or who painted it, it's probably fake. Fake or inauthentic can mean an Indigenous artist didn't create the product or didn't license the design on the product to be reproduced.

"There is no single national label of authenticity, so buyers should beware any seller who tells them otherwise," says NSW Fair Trading.

CHOICE research found an overwhelming 86% of consumers agree it's hard to distinguish fakes from authentic souvenirs. Another 43% said they would rely on an "authentic Indigenous art" label or statement – yet there isn't one.

Consumers tell us they'd use clearer labelling to make informed decisions about what's fake and what's the real deal, and supported ideas such as:

How to buy the real deal

Indigenous Art Code CEO Gabrielle Sullivan has some tips for consumers looking to buy souvenirs made by (or reproductions licensed to) Indigenous artists.

First, the product should explain who the artist is and where they're from.

Second, watch out for these warning signs, which could mean the item is fake:

"Make it your mission to make sure you are getting the real deal and the artist is getting a good deal," says Sullivan.

"An ethical operator will not have any issue sharing information with you about the supply chain and how the work you are considering purchasing ended up in your hands."

A question of authenticity 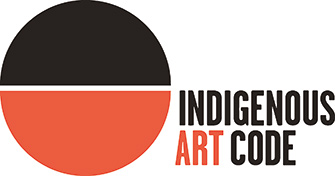 If you see this image when buying a product or entering a store which stocks Indigenous art, you won't be ripped off.

Artists and Indigenous organisations consider the code as the standard to pass if you're going to trade and buy ethically in the industry.

An individual, gallery or dealer can sign up to the code, but it's voluntary.

A boomerang that comes back 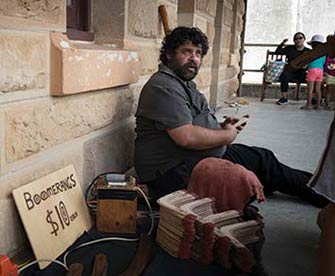 The Timberys have been making and throwing boomerangs on the south-eastern shores of Sydney for longer than the Timbery name has existed.

The Bidjigal clan were possibly the first to sell souvenirs to Europeans, selling or trading wood and shell work from the mid-1800s. Now, they sell boomerangs in select Circular Quay stores and at the Blak Markets, an Aboriginal-owned enterprise which ensures Aboriginal artists and communities benefit from the sale of merchandise.

Glen Timbery sells souvenir-size throwing boomerangs for $10 that are made out of local plywood. He uses his family's "burning-in" method to imprint each boomerang with a unique design. 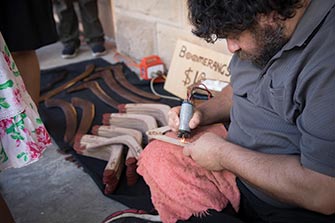 "You know the thing is I put my name on 'em: I write 'Aboriginal, Glen Timbery, Sydney, Australia', so when you see the ones that don't come from Australia, that aren't Aboriginal made, a non-Aboriginal person won't write their name on them," he says.

Timbery adds that the knock-off trade in Indigenous souvenirs "puts a strain" on his business and craft, with imported plywood boomerangs selling for as little as $6.

Armed with advice from legal bodies, regulators and Indigenous communities, we called 40 souvenir shops around the country, asking to buy 12-inch boomerangs which were made or painted by Indigenous artists or were licensed reproductions.

Around 60% of stores were able to answer questions about the artist or provenance of their boomerangs, with 13 out of 40 stores naming Murra Wolka as their supplier.

Almost half (47%) of the stores claimed the artist was paid for their work, yet none knew the actual amount paid.

The stores were also often unclear if the product was an original hand-painted item made in Australia by an Indigenous person, or a reproduction from overseas.

We then went out and bought boomerangs for between $6 and $12 in Sydney market stalls and souvenir shops, with several labelled confusingly.

We bought $6 and $8 boomerangs which had labels saying "Dream time Australia" and "Handmade and Burnt" on the back, but the supplier, Dreamtime Native Arts & Crafts, confirmed these were imported plywood boomerangs.

"It can be difficult for people who want to buy authentic Indigenous art and souvenirs to make informed decisions and support Indigenous artists and communities," says CHOICE head of campaigns and policy Sarah Agar.

"Always check for a label that says who made the artwork, and where they are from. If you can't find this information, that's a good warning sign that the artwork might not be what you are looking for."

Agar also suggests reporting any claims that are misleading or untrue to your local Office of Fair Trading and the ACCC, who can take action against unscrupulous operators.