The real cost of clothing - who makes your clothes and how much are they paid? 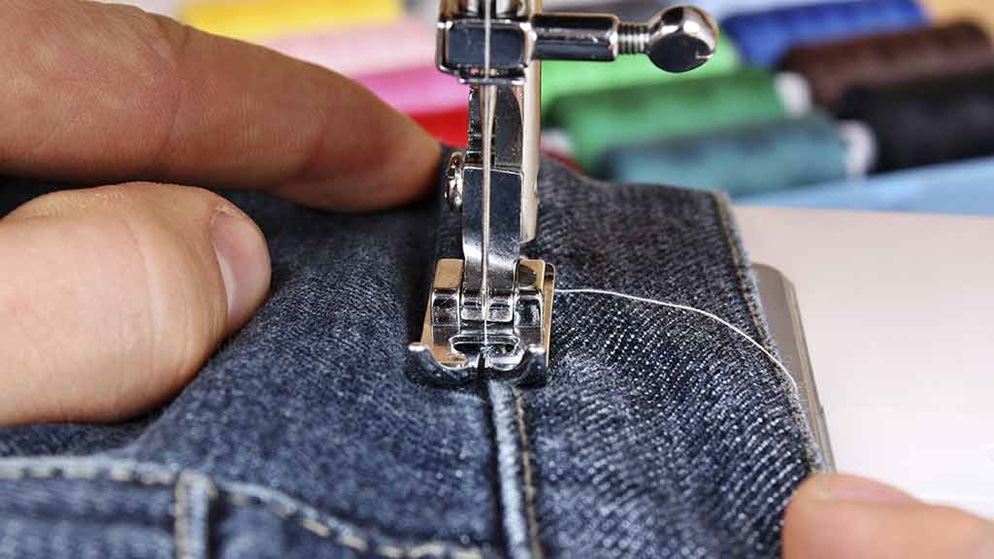 Where did you get that outfit?

You're likely to spend an average of $2288 on clothing and footwear this year. And if you want to know the story behind your spending, it's harder than you think to find out what conditions your clothing was made under.

Sweatshops aren't exclusive to low-wage countries. In fact, it's likely any clothes you wear with a label saying "Made in Australia" were made by an outworker in a backyard sweatshop, perhaps not far from where you live or work.

Many outworkers are paid below-award wages according to the Textiles, Clothing and Footwear Union of Australia (TCFUA) – often about $7 an hour and, in some cases, as little as $4. That's well below the legal minimum of $17.49 an hour wage for a machinist. Many will work 12- to 15-hour days, seven days a week to make ends meet, says TCFUA national secretary Michele O'Neil.

The sourcing network for garments is complicated: brands outsource to factories, which outsource yet again. A textile order can be passed down through three different contractors before ending up with an outworker. And knowledge of supply chains among brands and retailers is often poor, so outworkers are hidden at the bottom of the supply chain.

Ethical Clothing Australia (ECA) works to combat the issue of outworkers by providing ethical accreditation for Australian-made clothing. ECA accreditation guarantees that brands obey the law, which means all workers throughout the supply chain receive fair wages and decent working conditions. To receive accreditation, brands' entire supply chains are mapped, including the hidden workforce, a process which often uncovers parts of the supply chain that even the brands weren't aware of.

The TCFUA suspects one Australian women's fashion label, Morrison Clothing, has at times disregarded labour laws. Two outworkers in Morrison's supply chain told CHOICE they get paid an average of $8 an hour. They said they were paid $3.00–$3.50 per shirt for a recent order, each taking about 30 minutes to make.

Elizabeth Macpherson, an organiser at the TCFUA, says the union was investigating the company at the time of publication and knew of about 20 outworkers in Morrison's supply chain who aren't receiving the correct wages.

Morrison director Richard Poulson said the allegation is "absolutely incorrect. I believe we pay well above what the award would be. We're certainly not trying to strip margins. They [suppliers] quote – we pay them what they want."

However, brands manufacturing in Australia are legally responsible for their entire supply chain so the amount that labels pay suppliers has to take into account how much it will cost to make the item of clothing using fairly paid labour.

For Australian consumers wanting to shop ethically, the first port of call is the price tag, says Paula Rogers, an international fashion supply chain consultant. "If you go and buy a $3 T-shirt, common sense would say someone hasn't been paid a whole pile to make it."

Although studies suggest a majority of consumers would be willing to pay more for ethically produced clothes, brands won't change without commercial incentive. "They're in business, not in social enterprise," says Rogers.

Buying ethically made clothes: a checklist

The story behind the garment

When you're buying clothes made overseas, it's all but impossible to discover each step of the journey your clothes have taken. The clothing brands themselves can rarely trace the journey from fibre production through to textile and garment manufacture.

As Australian garment manufacturing has moved offshore, there's been a shift in responsibility. A longer supply chain means brands may not know about safety issues and poor working conditions. Russell Mullane, CFO and group logistics manager of Sussan Group, which owns Sussan, Sportsgirl and Suzanne Grae, told CHOICE that although he's confident the company is acting ethically by conducting factory audits, it can't monitor every link in the supply chain continuously. "We live in Australia and it's happening way up yonder. How can we really know?"

But ethical clothing campaigners are adamant companies should be responsible for their entire supply chain. They say poor working conditions are a result of companies' sourcing practices that put pressure on suppliers to cut prices further down the line. 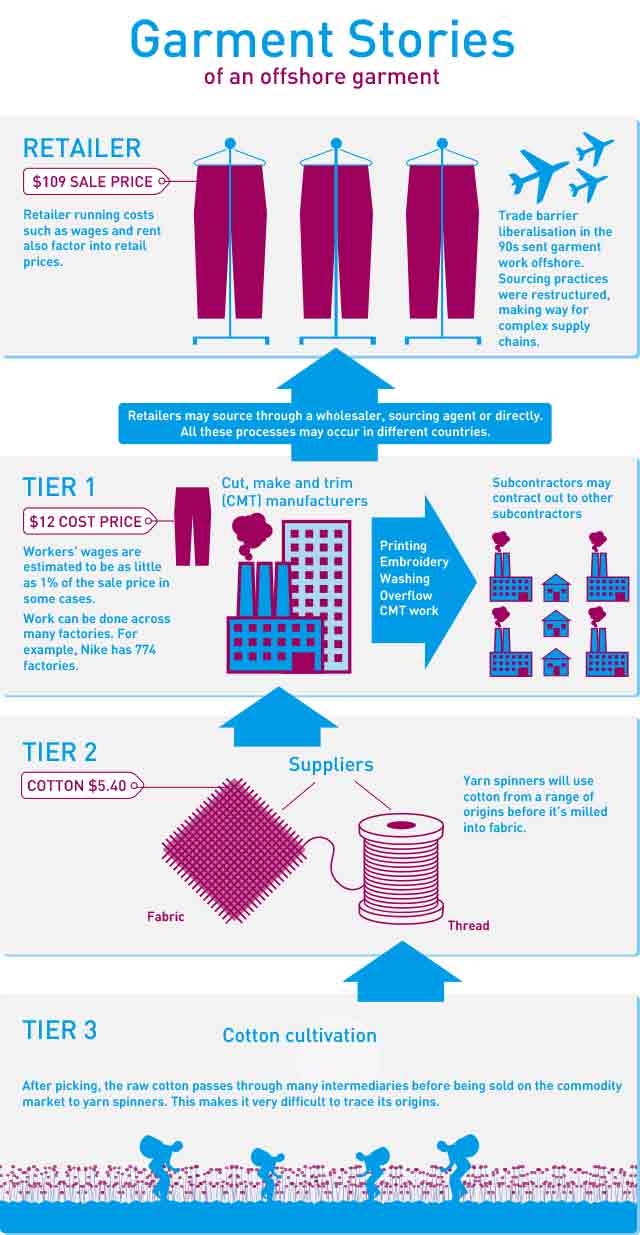 The real cost of clothing 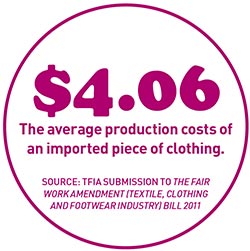 Brands source clothing by bargaining with suppliers on price. This price usually equates to 10-20% of the retail price and includes everything involved in the garment's production up to the point of shipping, including fabric, manufacturing and middlemen's profits. Macquarie Bank research estimates such production costs for a pair of jeans retailing for $US109 to be $US12.

While the labour costs involved with a garment are only a small part of the total cost of sourcing the product, many brands still seek to cut costs at this level, shifting their production to Bangladesh or the western provinces of China.

Where do our clothes come from?

Based on value, 92% of clothes sold in Australia are imported, according to the Council of Textiles and Fashion Industries of Australia. While China still dominates the textiles market for imported clothes, imports from low-cost countries such as Bangladesh and Cambodia have been increasing at a rapid pace. 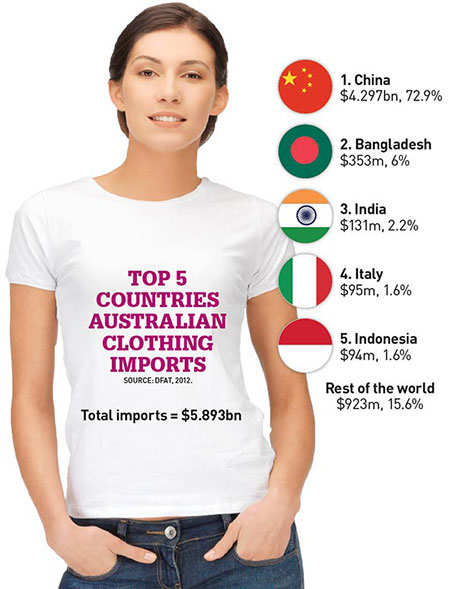 But following the Bangladesh factory collapse in April 2013, consumer concern has resulted in some steps in the right direction. There's been a shift in the ethics of the industry over the past six to 12 months, says Paula Rogers, an international fashion supply chain consultant. "I've never seen retailers want the information [about their suppliers] so much. They'd never asked for codes of conduct before," she says.

Unfortunately, a code of conduct doesn't necessarily guarantee better conditions for garment workers. In 2011, Spanish fashion brand Zara was found to be making clothes in a Brazilian sweatshop, despite having a code covering key labour conventions. One of Zara's factories had subcontracted out the work without its knowledge.

Without an independent regulatory regimen protecting workers' rights globally, companies have devised their own processes for workplace inspections, resulting in an $80bn market for corporate social responsibility programs.

Unfortunately, the inspections don't always lead to improvements for workers. For example, prior to the collapse of the Rana Plaza building in Bangladesh, two of the factories inside it had been audited but safety risks had not been identified.

Often audits are announced in advance and auditors may lack the expertise to do the job credibly. While independent audits can identify issues at factories, they aren't always helpful in resolving them, as Måns Carlsson-Sweeny, an analyst at AMP Capital, has pointed out. Audit results are usually kept secret, so the problems may never be fixed.

Some brands have been working to improve the transparency of their auditing by disclosing factory locations for third-party auditors. In 2005, Nike became the first brand to publish a list of its suppliers, and others such as Levi's, Puma and H&M followed. So far, Kmart is the only Australian retailer to disclose any of its suppliers, and Target has committed to do so .

What to look for in a brand

Clothing brands in the spotlight

Supply chain traceability: Knows all its primary suppliers, which must ensure subcontractors comply with the code of conduct. Says it's difficult to trace fibre and textile production as it's traded on an open market.

Made in: China, Bangladesh and India.

Supply chain traceability: All cut, make and trim (including subcontractors) factories are known. Fibre sourcing and textile production is managed by the factory.

Publishes factory details? No, but has signed the Accord.

Made in: China and Vietnam.

Audits: Yearly announced audits of all factories are conducted by an independent auditing company. Audit information is not made public.

Made in: Bangladesh. Would not comment on other source countries.

Publishes factory details? No. Has not signed the Accord.

Audits: Prior to doing business in a factory, an independent auditor checks the factory complies with local laws and Just Group principles.

Made in: Bangladesh. Would not specify any other countries where it manufactures.

Publishes factory details? Has committed to publish and has signed the Accord.

Made in: Bangladesh. Would not comment on where else it sources clothes.

Publishes factory details? Has published Bangladeshi factories and has committed to publish all its factories. Has signed the Accord.

Made in: Bangladesh. Would not comment on where it manufactures.

Publishes factory details? No, but has signed the Accord.

Made in: Bangladesh. Would not comment on where it manufactures.

Publishes factory details? No. Has not signed the Accord.

What about Myer and David Jones?

As well as stocking other brands, Myer and David Jones have their own. In Baptist World Aid's Australian Fashion Report, which ranks companies on ethical sourcing policies, transparency and traceability, monitoring and training, and worker rights, neither scored favourably. In this A-F rating system, Myer scored a D+ and DJs an F.

Many ethical sourcing policies have provisions for the legal minimum wage, however this is often not enough to meet the costs of basic living. A living wage is considered to meet basic costs such as food, water, shelter, clothing, energy and transport.

Companies signatory to the Bangladesh Accord must supply their factory locations so independent inspectors can audit them. They must also provide funds for safety improvements.