The truth about clothing sizes 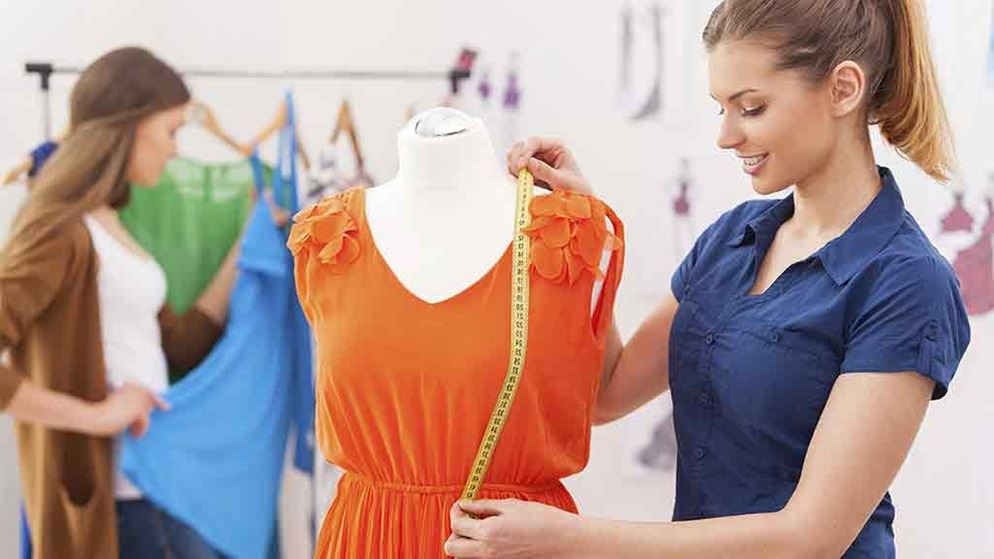 Thanks to an inconsistency in clothing sizes, dropping a dress size can be as easy as swapping stores. There is no Australian standard for adults' clothing sizes (although there is for children's clothes), and designers and clothing manufacturers base their sizes on their sales history, marketing hunches and what they believe is their ideal customer.

While this may suit the designers, who can manipulate sizing to give an instant "feel-good" factor or deter the "wrong" body shapes, consumers usually have to try a range of sizes to find the right fit.

The fashion industry experts CHOICE spoke to all agreed that as part of an Australian industry worth billions in manufacturing, retailing and wholesaling, sizing irregularity is one of the major issues.

The shape we're in

The most recent Australian clothing standard for adult men and women was withdrawn in 2007 as it was considered no longer relevant. Established in 1959, the standard was based on data from a 1926 study of women conducted by underwear manufacturer Berlei and some US Department of Commerce Standards. After 1970, several revisions were made to the standard for women using data provided by the Australian Women's Weekly, when 11,455 female readers measured themselves and posted in the results, the last revision taking place in 1975.

Almost 40 years later it's not surprising to learn those measurements are no longer considered relevant. It's no secret that Australians today are bigger than they used to be. And research from the US reveals that the sedentary Western body may be changing shape, with waists getting thicker in both sexes. Thanks to multiculturalism, there's also a wider range of body shapes than back in the 1920s. Despite these studies and abundant anecdotal evidence, there is still no definitive data to show just what kind of shape we are in today.

It's a different story overseas, where government and sectors of the clothing industry have conducted large-scale body-shape surveys in the UK, Spain, France, China, Japan, the US and Germany. This data has been used to help clothing manufacturers improve fit and identify new markets. It's also been used to develop better-fitting uniforms and safety wear, and improve ergonomics in products ranging from cars to seating on public transport.

In any woman's wardrobe it's not unusual to find an assortment of sizes, ranging from 10 to 16. For others, the size range of clothes available in stores might not fit them at all. A study conducted by the University of South Australia and SHARP Dummies in 2002 found that about half the people surveyed said they couldn't buy "regular"-sized clothing as it didn't fit their body shape, and it seems things haven't improved since.

The problem goes right back to the source. Alana Clifton-Cunningham, lecturer in fashion design at the University of Technology, Sydney, says the lack of a national sizing standard means the university has had to develop its own rough standard for students to use as a guide, and admits it seems more generous than what's found in mainstream stores. She also says it can take time to get students to understand the difference between the design and look of the garment and the actual wearability of the clothes.

Apart from the lack of standardised sizes, there are a few other reasons why there is such a difference between brands.

Part of the problem is our country's growing waistline, which has changed from the tapered and leaner pear shape of the 1920s to the more generous-sized woman today. Rather than keeping sizes consistent, retailers sensitive to the delicate issues around weight and self-image have simply snuck a few centimetres into their sizing. Nicknamed "vanity sizing", the rationale is that the customer will feel so good about suddenly fitting into a size 10 they will snap it up immediately.

Some years ago, department store Myer inflated the measurements of its sizes 8, 10, 12 and 14 by several centimetres, to represent what it said was a better fit for customers. Country Road is legendary for making the average size-12 customer miraculously fit a size 10. Youth fashion chain store Sportsgirl recently acknowledged the heavier population, announcing it would be adding some size-16 garments to its collection because of market demand.

The rise of size 0

The other, more sinister end of the scale is impossibly small sizing that controls who can wear what. With catwalk models averaging size 6-8, as well as new tiny sizing categories in the US such as sizes 00 and 0 (sizes 4 and 6 in Australia), the battle for body image extends across the shopping malls throughout the country.

Many of the industry experts CHOICE spoke to say some designers have an idealised type of customer in mind, and that there is real reluctance to have their clothes made in larger sizes. Even if they don't volunteer this publicly, the clothes on the rack speak volumes with tiny sizes de rigueur, especially among the higher-end designer labels.

Some openly admit the trend. Karl Lagerfeld brazenly claimed he designs clothes for ''slender and slim people'' when discussing the range he developed for European chain store H&M, while Australian designer Wayne Cooper is reported as having criticised the super-slim catwalk models at Australian Fashion Week for being "porky". While he said the comments were made in jest, the cut of his clothes are well-known for being small. Melbourne designer Bettina Liano is on record saying she makes size-14 clothes but they ''just don't sell''.

Kellock believes this policy has major implications for women's self-esteem, especially the impressionable young. ''Imagine a young woman walking into a store looking for a blouse. She rummages around, finally tries one and it doesn't fit. It's too small and there's nothing else. It sends a negative message likely to have long-term impact. She is going to think, 'I'm not wanted here, and I'm not good enough'.''

For older shoppers, the effect can be the same. Sarah Donges works as a personal stylist to a wide range of clients, many of whom are women in their late 30s or 40s who love fashion and have a lot of money to spend, but hate shopping. ''They can be completely frustrated that they can never find anything that fits them. Several of my clients have told me if they try one or two pieces on in a store and they don't fit into them, they just give up.''

A less common reason may just be manufacturing error. Jo-Ann Kellock, former executive director of the Council of Textile and Fashion Industries Australia (TFIA ), says there are often inconsistencies within brands and within sizes due to a lack of quality control. Thanks to mass manufacturing offshore there are issues around mislabelling, mistakes during overlocking and where garments are cut in huge quantities at one time – even a slip of just a few millimetres when cutting can mean a pile of size-12 garments destined for the same store can end up all different sizes.

Most of the industry contacts CHOICE spoke to said men, in general, have it a little easier. In most cases men's garments are named by a measurement, so if a pair of trousers is labelled 38 inches, it's likely they will actually be 38 inches at the waist. However plenty of men's clothing is starting to carry representation sizing such as small, medium and large labels or 1, 2 and 3, and disparity between sizes is more common.

CHOICE readers we spoke to complained about lack of length in trousers and sleeves, as well as an overall bad fit, but the consensus is the differences aren't as extreme as in women's clothes.

While the experts CHOICE spoke to agree a mandatory sizing standard isn't the answer, better information about sizing is needed. The latest ABS figures show 68% of adult men and 55% of adult women are overweight or obese (using the body mass index).

It makes sense that a national sizing survey similar to those conducted overseas would allow manufacturers to better understand the modern body shapes of consumers. It could empower manufacturers to provide better-fitting, flattering and more comfortable clothing – a win-win situation for both the industry and consumer.

To test just how much difference there can be between clothing sizes, I head to Sydney's Pitt Street Mall. My mission? To buy a straight black skirt. Sounds easy. Less easy was working out what size I was.

First stop was Portmans, and in their range I fit perfectly into a size 14 skirt. Deciding I must be a 14, I head a few doors down to Sussan and grab a 14 in their range. However, when I try it on it almost falls off, so I try a 12, which is also too loose, before finally zipping up a perfect-fitting 10. 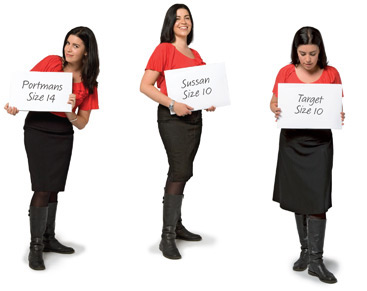 Feeling good, I set off for Country Road, where their pencil skirts are labelled ''small'', ''medium'' and ''large''. The small doesn't quite do up but the medium fits nicely. Later, the size 12 skirt at Witchery proves too small and the 14 too big, so I assume that makes me a 13 - but they don't make half-sizes.

In the department stores, the body bamboozling continues. According to Sportscraft, I'm a 10 but Alannah Hill thinks I'm a 14. SABA splits the difference, putting me in a 12. It's a self-esteem rollercoaster as I teeter between feeling petite and plus size, depending on who's dressing me.

I then sample a few higher-end Australian designers. 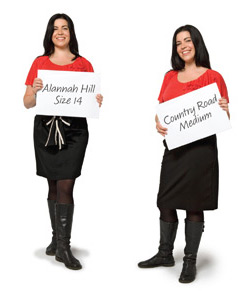 Leona Edmiston pegs me as a ''3'' in her dress range, which according to the sales assistant is a ''large 12'' or ''small 14'', whatever that means. Australian designers Sass & Bide don't even bother with Australian sizing on some of their labels, with one of their jackets informing me it's a European size 40 and US 6.

Feeling despondent, I head for the door but decide to make a stop at Target on the way home and try on one more skirt, the best fit being a 10. The confusion continues…