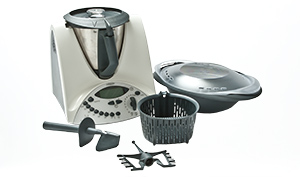 Thermomix's TM5, which in Australia costs just $50 more than its predecessor the TM31, was released on 6 September with no prior warning, and some new owners took delivery of their full-price TM31s as late as a day or two before. Consumers told us they asked about the rumoured new model when they were buying their TM31s, and were assured there was no upgrade on the horizon. And those who bought a TM31 with hopes of a high resale value may well be sorely disappointed – loyal Thermo fans lost hundreds of dollars off the value of their TM31s overnight.

When it comes to other high-value purchases like smartphones, consumers are used to being warned before a new product goes on sale so they can make an informed decision about whether to wait. If a company refuses to do this, at the very least they should make sure their sales representatives aren't giving customers misleading information in the lead-up to launch.

Thermomix Australia did eventually offer various sweeteners to those who had bought their TM31 after 1 July. But for many consumers, it's a case of too little too late. And if you thought things couldn't get any worse, the TM31s were the subject of an ACCC recall due to a fault that could make affected machines splash out hot liquid.

For being less than upfront with loyal Thermo fans about the release of its new TM5 model, selling the TM31 at full price and delivering it right up to the day before the launch, and receiving the highest number of public nominations in Shonkys history, we were left with no choice but to juice the Vorwerk/Thermomix lemon.