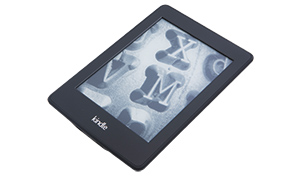 Ah creative accounting: a time-honoured technique with a history stretching back centuries. In the grand tradition of maths magicians the world over, we welcome the Amazon Kindle Paperwhite.

Now don't get us wrong: the Amazon Kindle Paperwhite and its 3G sister are fine e-readers: they were among our top picks in our last round of testing. But it's some very sneaky advertising about battery life that's had us packing a crate of lemons to be delivered to Amazon HQ.

So what's the issue? Amazon claims a very impressive eight weeks of battery life from a single charge for its backlit Kindle Paperwhite. Its advertising around the gadget compares its battery life against a laptop (a measly five to nine hours), tablet (just five to 10 hours) and smartphone (four to 13 hours? Pshaw!). If you were to take their bar graph as any indication, the Paperwhite's battery life should be at least 10 times better than any of its competitors!

But here's the punchline: while the stats for battery life for the laptop, tablet and smartphone are presumably based on continuous use, some very fine print indeed clarifies that the Kindle Paperwhite's boasted eight weeks is based on just 30 minutes of reading per day.

That's like a lollypop that lasts a whole year (as long as you have just one lick a day). Or an SUV with a tank of petrol that will last a month (as long as you only drive it round the block each day).

The Kindle's actual battery life is 28 hours – still good compared to your typical tablet, smartphone or laptop, but relatively typical when compared to other e-readers.

So for trying to bamboozle consumers by comparing apples with oranges, Amazon wins itself a juicy lemon.