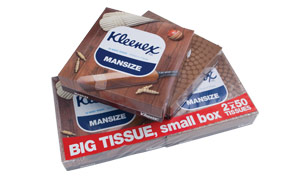 In a blow for the nation's manhood, Kleenex Mansize tissues have shrunk. First, the box is substantially smaller – about half the size of the old box. But so we don't get all sniffy about it, Kleenex tries to reassure us that they’re still "big, strong two-ply tissues you love, just in a smaller box". Yet the wording is clever: we're not getting the same big, strong tissues we love – just big strong tissues in general. Of course, we still love big, strong tissues, don't we, even if they're a little smaller than the old big, strong tissues?

In fact, the tissues themselves have shrunk in size by almost 14% – which is nothing to sneeze at. But does less tissue mean less manly? Should they now be called "metrosexual size" instead of "mansize"? Or is it that men in general have become less manly over this time?

Studies show men's testosterone levels have been diminishing over time – about 20% over the last couple of decades. Coincidence? We think not. Shonky? We think so.