The Shonky for Serving it up goes to... Toblerone 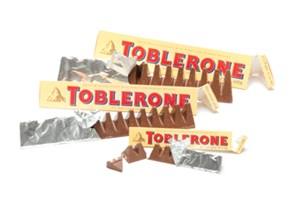 Picture, if you will, a gathering of 16 people, ready to tuck into their 400g bar of Toblerone, which conveniently contains 16 serves – according to the packet. But as servee number 15 takes the last pyramidal piece, a problem becomes apparent: 16 serves but only 15 pieces.

Clearly this logistical nightmare of mountainous portions can only be solved by breaking out the Swiss Army knife (which is why they were invented*), cutting one-sixteenth off every single piece and giving the resultant nougaty-chocolate crumb collection to the sweetless sixteenth. Either that, or it's all-out chocolate war.

And it's not just the 400g mountain range that suffers a number of serves versus number of mountains disjunction. The 200g range has 15 pieces and 8 serves and the 50g has 11 pieces and 2 serves. Yep, it's as cuckoo as a clock! But still we buy them, leaving Herr Tobler yodelling all the way to the Swiss bank.

Only the 100g mountain range can be divided in the sane, diplomatically neutral and mathematically pleasing manner of which we might imagine the Swiss would be proud, having 12 pieces and 4 serves. No knives, no war, no crumbs.

Toblerone: it's Swiss for Shonkalicious!

* Any resemblance to actual historical fact is purely coincidental and extremely unlikely.