The Shonky for Don't try this at home, folks goes to... Liquipel 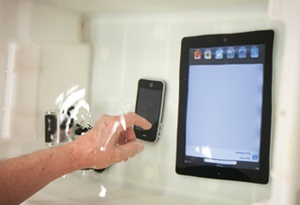 Liquipel is a nanotechnology coating for phones and other mobile devices that claims it "can now make your phone water safe, supporting a long and receptive life". It does this by applying "an invisible coating to the inside and outside of your electronic device, giving you optimal protection against damage from accidental contact with water". It seemed a little too good to be true, but with the gauntlet thus thrown down, we duly sent off some iGadgets for Liquipelling.

Test time. First we conducted a test inspired by the Liquipel promotional video, which showed them generously dousing an iPhone with water, and leaving it fully submerged – contrary, it should be pointed out, to their disclaimers which say you shouldn't do this. Their phone suffered no apparent ill effect. Unfortunately, our iPhone and iPad did, almost immediately. So it's pretty much a case of do as I say, not as I do – not to mention misleading advertising.

Our second round testing, including a shower, a brief dunking and finally submersion, found that the Liquipelled phones fared no better than untreated control phones, with one of the untreated phones surviving unharmed. The Liquipel claims, unlike the Liquelled phones, don't hold water, making the $99 service a false reassurance and a complete waste of money.

Meanwhile, four of the five test iPhones, went to a watery grave, and the iPad sustained permanent disabilities. Speaking at the funeral, a distraught Steve Duncombe, our Head Tech-head, stated grimly, "We did not expect them to die. We looked at Liquipel's video, we read their press release, and we believed them."

Liquipel: it's homeopathy for iStuff.

Based on CHOICE testing that showed the manufacturer's claims are false, NSW Fair Trading has issued a substantiation notice under the Australian Consumer Law that requires Liquipel to justify the advertised claims.