The Shonky for More like a squabble than a killing goes to... Exit Mould and Coles Ultra Mould Remover 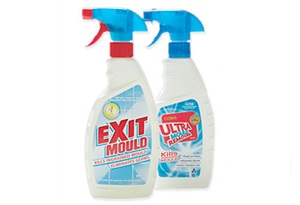 When CHOICE investigated bathroom mould killers this year, we were astonished to learn that they don't actually, well, kill mould.

Mycologists – that's fungus boffins to you and me – tell us there are several reasons for this, first and foremost being that these alleged mould killers can't penetrate porous surfaces, like grout, which is where mould tends to party.

Yes, it may look nice and white post-spray, courtesy of the bleach removing the colour, and some of the surface mould may even have rubbed off, but the root structure remains entrenched in the grout ready to sprout again and party another day. But it gets worse: the bleach can actually erode and corrode grout and tiles, making them more porous – and more receptive to future mould festivities.

And did you know that the active ingredient actually deteriorates over time? While this is kind of disclosed on the packaging, the starting levels are so low anyway that after a while there's not much left but the reassuring fragrance of chlorine.

So when market leader Exit Mould, along with Coles Ultra Mould Remover (using uncannily similar wording), tells us the product "Kills ingrained mould" and "penetrates porous surfaces to attack mould at the source", we're not convinced.