Shonky for Chery with a Shonky on top goes to ... The Chery J1 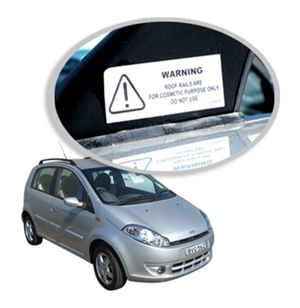 If you haven't heard of Chery, it's a brand of cheap Chinese-made cars that have hit the Australian market in the last 12 months, with its J1 hatchback model one of the first available.

Granted we were never going to expect a lot from a car that costs only $11,990. It looks kind of cute, and seems to go.

The three-star ANCAP crash test rating isn't too flash, but it could have been a lot worse (Proton Jumbuck, we're looking at you). The ACCC recall might have rung a few more alarm bells, as well as their initial ban in Victoria due to an absence of compulsory electronic stability control. But none of this is why we're giving them a Shonky.

It's because of a little sticker inconspicuously placed on the inside of the roof rails, which warns: "Roof rails are for cosmetic purpose only. Do not use."

Yes, that's right – decorative roof rails. If you use 'em you lose 'em – as well as what's attached.

Whatever the "cosmetic purpose" for bearing this car equivalent of a toupee, we're concerned that if the car manages to outlast the sticker and someone buys it secondhand, will they know not to use the rails?

"Why would you pick anything else?" Chery asks in its ads. To which we respond: "Where do we start?"