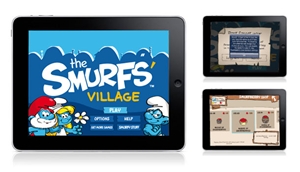 Countless parents have been stung for hundreds of dollars playing Smurfs' Village, a 'free' game app for iPad and iPhone, and now the Android platform. The idea of the game is to build up a village, which includes constructing buildings and bridges, growing gardens, and playing mini-games to create things like potions and cookies. The sting lies in the substantial cost of in-app purchases.

True, there's a disclaimer pointing out "Smurfs' Village is free to play but charges real money for additional in-app content," and additional warnings every time a purchase is offered. Trouble is, kids ignore it and parents are oblivious to it. So when little Johnny first asked for dad's iTunes password for a 'free' app, he thought 'why not?' and handed it over. When Johnny runs out of Smurfberries, required for in-game currency, he buys a truckload of them and dad wonders why his iTunes account is suddenly clocking up massive bills for a free game.

Okay, so in many cases the parents are culpable for giving kids the password, but parents often learn to trust their kids with 'free' apps – and the distinction between requests for real versus game money later in the game isn't always clear to the kids who the game is marketed to. Also, your password stays active in iTunes for 15 minutes after you enter it – ample time to clock up a few Smurfberry purchases.

So can you play the game without in-app purchases? It's not recommended, according to our expert iGamer, 13-year-old Will Kollmorgen. "They give you a small amount of Smurfberries for free to start off. After you use them up and really get into the game, you'll need to pay for Smurfberries to keep adding things and expanding your Smurf world. If you don't pay to add things, it's just not fun anymore."

Our in-house gamer confirmed that once you get to a certain level, which took him less than half an hour, things really slow down unless you pay real money to speed things up again. At that point, he says, it's really not worth playing – but if you're already hooked, which apparently happens quite readily, you'll pay to play.
We've seen bills of over $400 for in-app purchases, and bills of over $1000 have been reported elsewhere.

While we appreciate the developers want to make some money back for a 'free' game, it's an awful lot of money compared with conventional computer or console games, which typically cost $50-100 one-off.