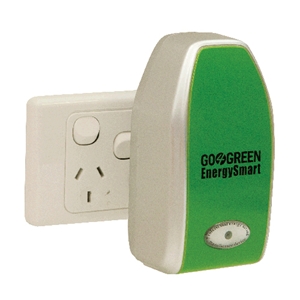 Talk of a carbon tax has seen a flurry of activity among entrepreneurs keen to cash in on community paranoia, whipped up by talkback radio and tabloid media.

Go4Green EnergySmart claims you'll save 10% on energy bills with its plug-in power saving device. And, at a mere $299 a pop, it will pay for itself in six months.

So why wouldn't you buy one? With the government pledging compensation for increased electricity bills, any power savings you make will be money for jam. The trouble is, it doesn't work.

We hooked up a variety of motor-driven devices, such as a vacuum cleaner, a drill, a grinder and a pump. There were negligible savings, and in some cases it cost us marginally more.

We then measured the energy usage of a dryer, washer, air conditioner and a variety of smaller appliances in a house.

We plugged in the device as per the instructions and ran the appliances again on the same programs. Our testing found negligible changes in energy consumption. While we did see some changes in power factor and harmonics, these elements are not taken into account on your electricity bill so won't save you money.

We had the electronic componentry valued at $15.

Go4Green have since claimed that they are no longer in business, though we were still able to purchase their device online as we headed off to the Shonky ceremony.