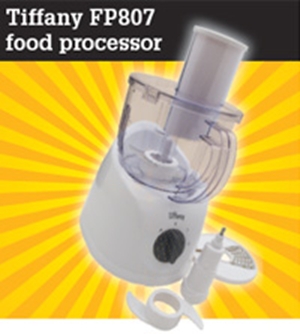 When we tested food processors earlier this year, we included the $40 Tiffany FP807. Granted, it was by far the cheapest on test, but we didn't expect it to fail so spectacularly at the first hurdle – the cheese-shredding test.

And we're talking about normal cheese here, not some ancient, diamond-hard specimen mined from the caves of Lascaux. But the Tiffany crumbled faster than you could say "garden variety cheddar", with the plastic parts of the shaft that are supposed to hold the shredding attachment breaking off during processing.

Figuring we might just have been unlucky enough to have bought the only shonky sample manufactured, we bought another and tested it with something less challenging: mixing mayonnaise. As we marvelled at the perfection of the final product, said product slowly but surely oozed its way out of the bowl and into the electrical components of the processor – a potential electrical hazard.

Slightly dazed but undeterred, we cleaned up and moved on to the cheese test. But alas, machine number two committed suicide in much the same way as number one. Tired of throwing good money after bad, we didn't persist with a third machine to see how it would handle the real test of a food processor's mettle: kneading pastry.
(Published in CHOICE, September 2009)