The story of the worst insurance product in Australia. 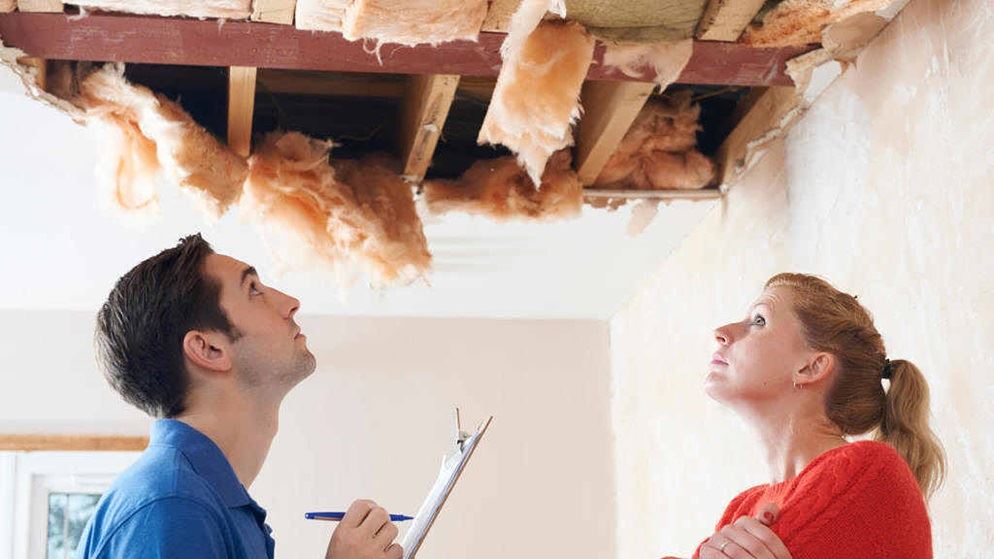 Domestic building insurance is mandatory in most states of Australia, but does it actually protect homeowners when their new build goes bad and the builder goes AWOL? The family home is the biggest investment most people will make in their lives, but if you're paying to build a new property, your house purchase comes with some pretty weak consumer protections.

When Jenni Bate and her husband bought their new strata-managed townhouse in Sydney's south-west, the last thing they expected was for the building to start deteriorating within a year. Six months after moving in, cracks began appearing in the ceiling and walls, and by the end of the year the builder had repaired the damage twice. This was enough to convince Jenni to commission an engineer, who reported that remedial work should be done to the foundation before any cosmetic repairs, lest the cracks came back later.

"They told us the house isn't going to fall down, but the foundation would benefit from underpinning," Jenni said. "It's not in imminent danger of collapse, but because the house is on a slope it's moving more than we thought it would, and it's pulling our neighbour's house with it."

Fair Trading ordered the builder to comply with the engineer's recommendations. The builder replaced cracked tiles in the bathroom, put expansion joints in the ceiling, and then packed up and left without repainting the interior and without touching the foundation.

At this point Jenni's strata management (since sacked) took it upon themselves to tell Fair Trading that all the remedial work had been done, case closed. Meanwhile, the builder was refusing to take the Bates' calls. Fair Trading now refuses to reopen the file, and with no other recourse except an expensive legal battle, the owners' corporation is set to be at least $15,000 out of pocket to pay for the repairs themselves. After all this, Jenni is afraid they won't be able to sell a house with such a storied defect complaint history.

In the 2014-15 financial year $63.1 billion worth of residential construction work was commenced across Australia. However for all the money invested, the protections that come with a new house are only marginally better than the warranty that comes with a new blender.

All domestic building work worth over a certain amount comes with a warranty period between five and 6.5 years (except for apartment blocks - another story altogether). Details differ between states, but the basic principle is that if a defect rears its head during that time then the builder is required to rectify the problem. But what if they aren't in a position to, or simply don't do the work?

The most important insurance you've never heard of

Every state and territory except for Tasmania has a mandatory domestic building insurance (DBI) scheme, most of them backed by state money. Builders pay a premium, typically 0.5-1% of the contract value, the cost of which they pass on to the consumer. This insurance offers cover for defective work or non-completion, but only if the builder is no longer around to fix the work themselves - that is, insolvent, disappeared, or dead.

In most states, if the builder is still in business, homeowners don't have access to insurance to fix building defects. For this reason, it's called "last resort" insurance. If a builder fails to fix dodgy work, the onus is on the homeowner to chase them through an often labyrinthine process of mediation, tribunal and court hearings before they can get any remedy.

The long-standing exception is Queensland, which offers "first resort" insurance. There, a homeowner can complain about a builder to the building regulator, the Queensland Building and Construction Commission (QBCC). If the builder refuses to comply with an order to rectify, the homeowner gets access to their insurance policy. The QBCC then pursues the builder for the cost of the claim, leaving the homeowner to get on with their life.

If home and contents insurers expected their clients to sue burglars for damages before offering to pay a cent themselves, they would soon run out of clients. So why is this the case on house construction? To answer that we have to go back to the beginning of the last decade, when private insurers were still selling first resort policies across the country.

What went wrong with building insurance?

The 2000s was a horror decade for Australian insurance. It opened with the country's largest ever corporate collapse in HIH Insurance, and closed with the GFC. Both calamities forced insurers to tighten their purse strings, which made insurance policies harder to come by.

On the DBI front, private insurers were getting out of the market, which was becoming increasingly unprofitable. State governments introduced "last resort" policies in 2002, on the assumption that by limiting consumers' access, the insurers could begin to break even on the product. Even so, by 2009 there were so few companies willing to offer DBI that the prospect of even another insurer pulling out of the market forced State Governments to step in.

Governments in NSW and Victoria took over the industry in their respective states in 2010, offering insurance directly or through private brokers. South Australia and Western Australia let private insurers keep operating, offering reinsurance to keep them afloat. Smaller, even less profitable markets had to improvise. The territories each instituted fidelity funds, a type of industry-operated compensation scheme, in the absence of private insurers. Tasmania opted to make DBI voluntary in 2008, and today even last resort policies are unavailable in the island state.

Taking on DBI meant taking over the same problems that had sent the private insurers running for the door. As a type of "long tail" insurance, the insurer's success in any given year isn't certain until about seven years after, when most of the claims arising from that year's policies have been settled.

To be comfortably profitable, DBI providers will aim for an average loss ratio (claims payouts as a percentage of premium income) of 70%. The Victorian DBI fund's loss ratios for the years 2007 to 2010 are all above this margin, with the 2008 ratio at 109% - a clear deficit. Likewise, the NSW Home Building Compensation Fund (HBCF) expects to lose more than $200 million between 2010 and 2015.

State-run DBI is at a crossroads. On the one hand, claims payouts are outstripping premium intakes in many jurisdictions. On the other hand, properly designed DBI is an important safety net for homeowners, which is why it is a mandatory purchase across most of the country.

Major reform of DBI is currently being mooted across the country. In the Northern Territory, the Cureton Review of construction regulations has made a number of promising recommendations for DBI which would make it the gold standard of DBI offerings. Recommendations include expanding warranties to include apartment buildings over three storeys (currently excluded elsewhere), and introduce a first resort insurance model administered by the government.

Meanwhile, Victoria has been tinkering with its model. Last year a new claims trigger was introduced, moving Victoria closer to the Queensland model. Contracts signed after 1 July 2015 allow homeowners to access insurance if the builder fails to comply with a court order to repair substandard work. In 2014 the state government bumped up the minimum contract value from $12,000 to $16,000, while also increasing the claim limit by 50% to $300,000. In simple terms, this meant that smaller projects would no longer be covered, but larger builds would be covered for more.

Reform is also on the agenda in NSW, where our case study occurred. In 2010 the state introduced a new trigger, allowing homeowners to access insurance if a builder's license is suspended or cancelled for failing to comply with a compensation order issued by the NSW Civil and Administrative Tribunal or a court.

Now, Fair Trading is seeking feedback on a range of proposed changes to the system. Possible changes include increased premiums, or reducing the warranty period from six to four years. One model is a combination of the two - effectively making homeowners pay more for even less. The minimum contract value to require insurance might be increased (despite NSW already having the highest minimum threshold in the country). Or DBI might simply be made voluntary, a move that Fair Trading admits will rely on private insurers wanting to re-enter the market, a possibility that is unlikely considering Tasmania's track record with voluntary DBI.

On the face of it the proposals seem geared toward plugging the cash leak plaguing the HBCF rather than improving protections for consumers. Peter Primrose, NSW Shadow Minister for Innovation and Better Regulation, is wary of reform proposals that water down the level of coverage provided to consumers.

"It always begins with 'There's not enough money, we want to provide a high quality service, so we're going to make it more efficient.' And what invariably happens is people get taken off the system," he says.

He says Labor will judge the proposals on their merits, but is concerned that the government seems to have made up its mind on which direction it wants to move. "We're not going to take a 'dog in the manger' attitude to these reforms," he says. "However, we would want to look at why the Queensland model isn't being considered."

NSW Fair Trading defended the current claims triggers. "The system is geared to resolving problems directly with a builder as the 'first resort'," said a spokesperson, who also noted that DBI provides a "safety net" for when other avenues of dispute resolution have failed.

Greens NSW MP David Shoebridge worries that the reforms will remove that safety net. "The Greens have significant concerns that the proposed changes to the Home Building Compensation Fund will erode consumer protections and put home owners at financial risk," he says. "History has proven that for home building insurance to be viable and effective in the long term it must be compulsory, publicly-backed and comprehensive."

"Any measure that can be proven to reduce overall legal and administrative costs in the scheme while protecting consumers needs to be on the table and this includes options that broaden access to domestic building insurance."

The United Kingdom is a case study in how consumers can get adequate protection against construction defects. DBI (there called structural defects insurance) is not mandatory, although mortgage brokers will require it for new houses, making it all but compulsory. The warranty period for structural defects also extends for a decade, giving homeowners a much greater level of coverage than in any Australian jurisdiction. Best of all, insurers offer first resort polices, allowing homeowners to claim against their policies without having to chase an intransigent builder through the courts first.

DBI is a valuable safety net put in place to protect the biggest investment most people will make in their lives. Homeowners deserve a system that provides them with an adequate level of protection. Some jurisdictions are moving toward more accessible schemes, although it will take structural reform (like replacing broker commissions with a fee-for-service model, or simply having government directly sell policies) to make the products viable. While insurance funds continue to run deficits there will always be the temptation for cost-cutting governments to use this as an excuse to nibble away at these important consumer protections.

How do the states match up?