This handheld smoker promises to impart smoky flavour to your cooking in just a few minutes. 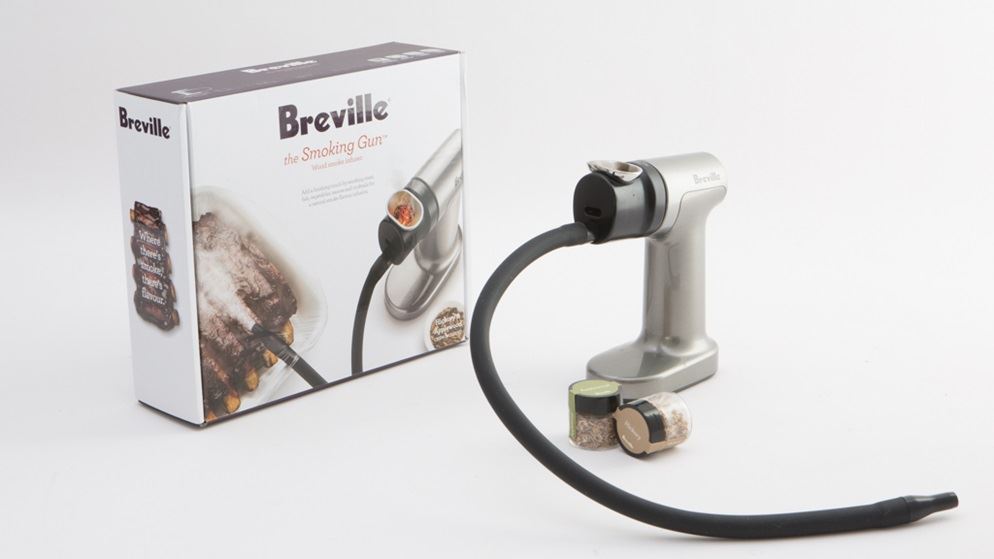 Smoking meat and other food is often a time-intensive process, involving placing food over a bed of smouldering woodchips that sends smoky flavours through your cooking over several hours.

But Breville has come to the rescue of time-poor cooks looking for a shortcut to that smoky flavour.

The Smoking Gun is a handheld battery-powered device that holds lit woodchips, and pipes smoke through a hose to your food to quickly infuse it with flavour. Sounds high tech and fancy – but does it work?

See our barbecue reviews for results on more than 40 models from brands including Weber, Ziegler & Brown, Masport and more.

How to use the Smoking Gun

If you follow the provided instructions, it's very easy to use. You can do the smoking before or after you've cooked the food. To get started, place your food in a bowl or container and cover it tightly with plastic wrap – place the end of the hose under the plastic wrap as well. Add a pinch of the supplied hickory or applewood chips to the gun, turn on the gun, light the chips, then activate the fan that blows the smoke through the hose to fill your container. Breville recommends one to three minutes for smoke infusion to work.

We found it was impossible not to let some smoke escape – that's the physics of a limited space. Because of this, it's best to do any smoking in a very well ventilated area – or you might get a face full of smoke and set off the smoke detector.

The supplied jars of hickory and applewood chips will probably last a while as you only need a pinch each use.

Breville supplies some starting recipes, so we decided to try the:

We did two versions for the taste test, one with smoking and one without. We also tried smoking rock salt. All of the recipes require a few minutes for the smoke to permeate the ingredients.

The sheer volume of spicy ingredients in this recipe added so many contrasting flavours that any smoke was difficult to discern – so we recommend that if you really want a smoky flavour to come through, maybe make a version with less spice.

The smoke is added to the last stages of this recipe, and it really does impart a strong flavour. When combined with the coleslaw in the next recipe, it adds a strong earthiness to the taste.

This recipe requires smoking the marinade in the final stages of roasting the ribs. We found there was only the faintest smoked flavour though. Breville does recommend a second smoking if you want a strong smoky flavour.

Smoking rock salt was very simple, and this had the strongest impact on flavour of any of the recipes once it was ground in a pestle post-smoking.

We found the smoky taste in our test recipes a bit hit and miss. And many of the recipes contained other ingredients that may have been adding a smoky flavour. For instance, the Bloody Mary includes bacon cooked in an oven, and the aioli uses a garlic bulb that's been roasted in the oven. The ribs marinade calls for smoked paprika and whisky. Overall we were happy with the results of the smoked aioli and salt, but we'd recommend a stronger smoking of the ribs recipe.