Some alternative therapy tests just aren't all they're quacked up to be. 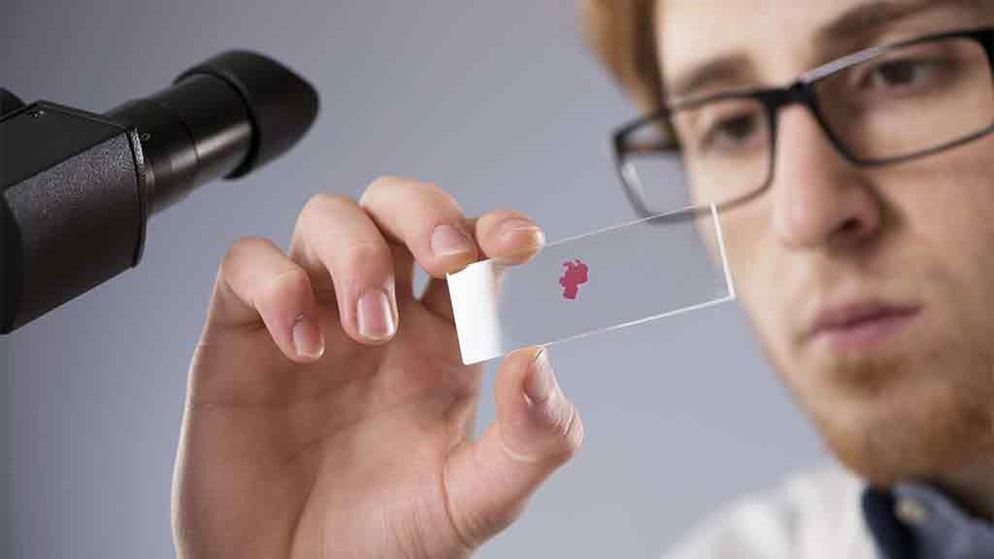 Feeling tired, bloated, depressed, irritable or sluggish? Worried about your body's toxic overload or that your chakras are out of whack? Unless something's really wrong, you probably won't get much joy from your doctor. But there's always a natural therapist who can help.

They may offer a test – or a battery of tests – to find out everything that's wrong with you, from using whizz-bang machines and prodding different body parts, to hair and finger-prick blood tests.

After the test, they'll likely identify certain herbs, "remedies" or supplements that can help you with your newly discovered syndrome/s, and helpfully sell them to you while you're booking in an extensive series of therapy sessions.

Having sat down for an hour with someone prepared to listen to the minute details of your health concerns, you'll already be feeling better, confident your practitioner understands what's really wrong with you – because there's always something, and you'll rarely hear an "I don't know".

The question is; do these tests actually work? We look at some of the more common ones here to help uncover the truth.

Women over 40 are entitled to free mammograms, and they're recommended every two years for women 50-69, to screen for breast cancer. They're sometimes uncomfortable or even excruciating, and there are some wild assertions they actually cause breast cancer. So when a natural therapist offers a "safe, accurate and comfortable" alternative screening for women of all ages, it's not surprising that some women, particularly younger ones – for whom the traditional process is considerably more painful – are interested.

Thermography, also known as thermal breast imaging, measures the temperature of skin on the breast to produce "heat pictures". Its use is based on the premise that the skin overlying a malignant breast lesion can be warmer than that of surrounding areas. However, studies have shown that the tumour has to be several centimetres in diameter before it can be detected (mammograms can pick them up at around 0.5cm).

As BreastScreen Australia points out, "There is no current scientific evidence to support the use of thermography in the early detection of breast cancer and in the reduction of mortality".

Live blood analysis (also called dark field microscopy, or Hemaview, after a popular make of machine) involves a drop of your blood being placed under a microscope with the image transferred to video screen. By looking at the shape, size and proportions of blood cells and other components, proponents claim they can detect all sorts of diseases and health problems, such as digestive, eliminative and immune issues, "liver sluggishness", the presence of bacteria, fungus and yeast, vitamin deficiencies, "amount of toxicity", pH and mineral imbalances - just to name a few.

A lack of evidence has led the Therapeutic Goods Administration's (TGA) advertising complaints resolution panel to demand the withdrawal of ads suggesting live blood analysis can be used for diagnosing health problems related to immunity, nutritional deficiencies, stress and free-radical damage, among other things. Or, as haematologist Professor Hatem Salem says, "The notion that one can diagnose all sorts of ailments by examining a drop of blood on a video screen is both ridiculous and plain stupid."

There are a number of measurement techniques that fall into this category, including bio-impedance analysis (BIA), electro-interstitial scanning (EIS), bioresonance and VEGA machines.

All of them claim they can somehow determine your internal physiological status by placing electrodes on your skin and measuring electrical resistance. These devices are widely used by naturopaths, chiropractors and other natural therapists, who claim that their machines are able to diagnose both serious and self-limiting health conditions.

Some say they're "TGA approved", which actually means that the device is (or was) listed with the TGA on the basis that it's reasonably safe – not that it lives up to the grandiose claims that the accompany advertises. Reputable scientific research consistently disputes any therapeutic claims made for these devices, and this is backed up by expert opinion from physicists and specialists in immunology and allergies.

This is often and correctly used to measure body composition in terms of fat, water and lean body mass, and can be a useful tool for weight management and physical fitness programs – think body fat scales. However, some practitioners claim it can also measure cell toxicity, inflammation and energy levels, as well as determine your cellular age. But endocrinologist Professor Lesley Campbell tells us, "The claim that BIA can assist in monitoring toxicity, inflammation, malnutrition and poor cellular function is unscientific and unfounded."

This is based on measuring and interpreting resistance to the flow of electric current through interstitial fluid (the fluid between the cells) via six electrodes placed on the body. It's claimed the data can be used to assess the health status of all of the major organs of your body, as well as diagnose ADHD and monitor hyperthyroidism, hypertension, atherosclerosis and depression. Dr Stephen Barrett of Quackwatch (a US-based organisation which applies scientific methods and principles to establish the validity of alternative health products and services), consulted scientific and medical literature and spoke with biochemistry experts to conclude, "Electro interstitial scans have no proven practical value and could cause large amounts of time and money to be wasted by people who believe the speculations".

This is often used to detect allergies and food intolerances by having one electrode placed on your finger, another on an acupuncture point on your hand or foot, and introducing a sealed container of food into the circuit. Reduced electrical current means a sensitivity. However, as physicist Professor John Storey points out, "The device simply measures the electrical resistance of the patient's skin. There is nothing in the device's operation worth discussing, unless one has a particular fascination with the electrical resistance of a person's skin."

Kinesiology is the science of human movement. Applied kinesiology (AK) applies nonsense theory to this science. Practised by some chiropractors and other natural therapists, the premise is that every gland and organ dysfunction is accompanied by a weakness in a corresponding muscle, and by testing the strength of various muscles, the therapist can diagnose stresses, imbalances and sub-optimal functioning.

Similarly, nutrient deficiencies and allergies can be diagnosed by having the patient hold a test substance while the practitioner tests their muscular strength. According to allergy expert Professor Chris Corrigan, "This is all completely bizarre and, I am afraid, utter nonsense. There is no scientific evidence or mechanistic base to suggest that these tests could be remotely effective."

Going hand-in-hand with AK is Nambudripad's Allergy Elimination Technique (NAET), which is based on the notion that allergies, caused by energy blockages diagnosed with AK, can be permanently cured with acupressure and/or acupuncture treatments. Suffice to say, if you have a previously unknown allergy diagnosed with AK and miraculously cured with NAET, it probably never existed in the first place.

Hair analysis is used legitimately to detect certain chemicals and metals, which indicate their presence in the body. Troubled footballer Ben Cousins agreed to regular hair analysis for illicit drugs – then shaved his head and waxed his body before fronting up for a test! Meanwhile, people in high-exposure environmental or occupational situations may use this form of testing if they're concerned about overexposure to heavy metals such as mercury, lead or arsenic, which can all show up in hair.

But is it useful for the average Joe to get an analysis from their naturopath? Probably not – they'll almost certainly find some metals, but whether it's of any clinical significance is dubious. The reliability of hair testing for mineral deficiencies is questionable, and claims that it can detect allergies are completely unfounded.

Iridology is the study of the iris (the coloured part of the eye) to diagnose disease, based on the notion that every organ in the human body has a corresponding location within the iris. By examining the markings and patterns of the iris, the practitioner can determine whether a particular organ is healthy or diseased.

It's true that there are signs of certain diseases in the eye - for example, a whitish ring around the iris indicates high cholesterol. But the claims of iridologists go way beyond these broad signs.

Clinical trials that put iridologists' skills to the test variously find there's little consistency between practitioners, that seriously ill people may be diagnosed as healthy (and vice versa) and a practitioner presented with the same iris more than once will diagnose it differently each time.

Patterning of the iris is often used for bio-identification because it's so consistent and unchangeable over time: this wouldn't be the case if it changed to reflect new illnesses, such as cancer, and surgery, such as hysterectomy. This may be why the claims of some iridologists have tempered in recent years to suggest that the iris simply shows underlying health weaknesses, which may or may not be activated according to your lifestyle.

According to the Royal Australian and New Zealand College of Ophthalmologists, "The practice of iridology has no basis in science and is considered to be disproved alternative health care."

As Quackwatch observed, "These [electrodiagnostic devices] and similar tests are used to diagnose non-existent health problems, select inappropriate treatment, and defraud health insurance companies. The practitioners who use them are either delusional, dishonest, or both."

If you consult a natural therapist, take their advice with a grain of salt, and certainly avoid paying for any tests or therapies similar to those above. A nice massage, a chakra realignment and some sound dietary advice (that doesn't exclude major food groups) could do some good, even if only to your mental state.

Any suggestion of allergy, food intolerance, genuine nutrient deficiency or serious illness should be verified by a medical specialist or allied health professional. If you have a real health problem, visit a qualified doctor for a correct diagnosis.

Are you paying for dodgy diagnostics?

Most health insurance funds offer extras cover rebates for services such as naturopathy, homeopathy, chiropractic and iridology and other alternative therapies whose scientific and medical validity has been questioned. Even if you don't use them yourself, you're likely to be subsidising someone else who is! Some policies offer more of these than others, so choose accordingly.