Do throat lozenges really relieve sore throats and cold symptoms, or is it just marketing spin? 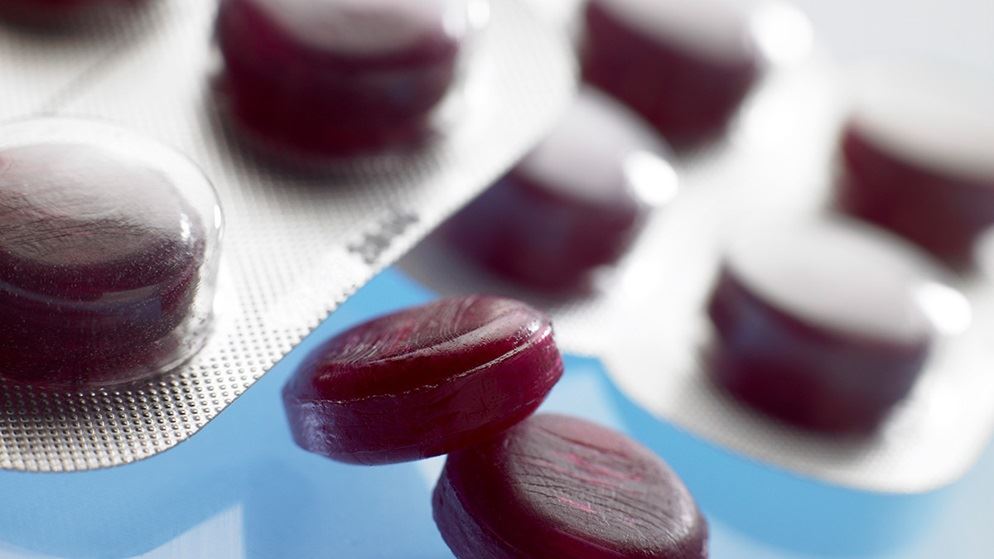 A sore throat can feel like a thousand tiny knives scratching you every time you swallow. Then there's the extra special pain of coughing – excruciating! So with throat lozenges promising a world of relief, it seems like a no-brainer to just pick up a pack and start chain-chewing your way through the pain. But are cough lollies really anything more than glorified sweets?

Benzydamine hydrochloride and flurbiprofen are painkillers that belong to the group known as NSAIDs (non-steroidal anti-inflammatory drugs) that help reduce swelling. A number of good-quality studies have shown that flurbiprofen lozenges and benzydamine hydrochloride given as a spray or gargle provide effective relief from sore throat symptoms, including difficulty in swallowing.

Amylmetacresol, cetylpyridinium chloride, dichlorobenzyl alcohol and hexylresorcinol are antibacterial agents that help fight against disease-causing bacteria. But the majority of sore throats are caused by viral infections rather than bacterial, so for the most part antibacterial agents in lozenges aren't going to help.

Pholcodine and dextromethorphan hydrobromide are antitussives that are intended to help suppress dry, unproductive (non-phlegmy) coughs, which can contribute to making your throat sore. But a wide-scale review of trials testing antitussives (mainly dextromethorphan) found that they were no more effective than a placebo for treating coughs in most cases. And a much higher concentration of dextromethorphan was used in the trials than is found in throat lozenges.

Menthol is made synthetically or obtained from mint oils. It's the component of peppermint oil that's thought to be responsible for most of its therapeutic properties. It gives a cooling and soothing sensation when you inhale or eat it, thanks to its ability to chemically trigger cold-sensitive receptors in the skin. But the effect of nasal decongestion from menthol is subjective — studies show that although people feel decongested after inhaling menthol vapour, there's no actual improvement in the nasal airway when airflow is measured.

Just like menthol, eucalyptus is thought to act as a nasal decongestant. However, there's a lack of controlled, clinical studies to support its effectiveness.

Pectin is commonly used as a thickening agent in foods like jam and jelly. In throat lozenges it's used to coat the throat, and in doing so has a soothing effect in much the same way as a teaspoon of honey would.

Many throat lozenges claim to have effects that extend beyond soothing a sore throat to the relief of cold and flu symptoms generally. They all have one or more of the following ingredients in common:

Echinacea is thought to help boost the immune system and alleviate symptoms of the common cold. Its preparations can differ greatly depending on the type and parts of the plant used and the manufacturing methods, however, and the overwhelming majority of products haven't been tested in clinical trials. A Cochrane review of echinacea found that some preparations might be effective for the early treatment of colds in adults, but results aren't consistent. Beneficial effects of other preparations might exist but haven't been shown in good-quality trials.

Vitamin C appears in throat lozenges in various forms, including sodium ascorbate and calcium ascorbate dihydrate. It's thought that it can help reduce the duration of the common cold. But a Cochrane review of vitamin C found that it didn't show any benefit in doses up to 4g daily. The dose of vitamin C in individual throat lozenges sampled by CHOICE ranged from 10mg to 100mg.

Zinc is thought to reduce symptoms of the common cold, including a sore throat. A 1999 Cochrane review found that evidence was inconclusive as to whether zinc lozenges were an effective treatment for symptoms of the common cold. Since then though, several new studies have shown that treatment with zinc lozenges does significantly decrease cold duration. It's likely that the results are conflicting because the dose and formulation of the zinc used has an influence over effectiveness.

Taking painkillers (for adults) is an effective way to relieve the pain and discomfort of a sore throat. But if you'd rather not take any medication, the following might also help:

A sore throat usually resolves itself within three to four days, and it's unusual for one to last beyond a week. If it persists, or your symptoms include severe difficulty swallowing or breathing, a fever or tender or swollen lymph glands in the neck, see your doctor.

The causes of sore throats