How do you pick the best and avoid an extra serving of chemicals? 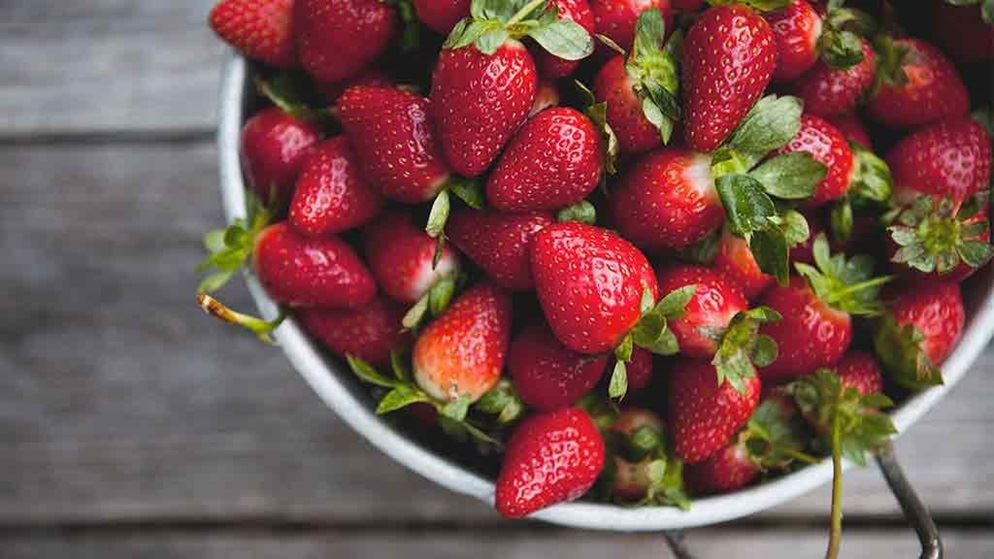 Fancy a mouth full of pesticides?

We love our strawberries. They look beautiful, taste delicious and ought to be healthy. But are there hidden dangers? The results from CHOICE's 2008 test on strawberries suggest we should be concerned about poor pesticide practices in Australia. In 2014 we did a similar test on organic vs conventionally grown table grapes, and our concerns remain.

Strawberries are more likely to be contaminated with pesticides than other fresh fruit, as growers use pesticides to protect their berries from insect pests and fungal diseases. Without pesticides, strawberries would be more expensive because yields would be lower and there would be greater losses from them going bad before they get to the shops (this is one reason why organic fruit costs more). But pesticides can be applied too enthusiastically.

For the 2008 CHOICE test, we bought strawberries from Coles and Woolworths, as well as from several independent fruit shops, organic food specialists and organic food markets in Sydney.

Our experts assessed each punnet on the quality of the berries – taking into account ripeness and rot. Finally, a lab tested the strawberries from each grower (31 growers in total) for pesticide residues.

If you're a farmer or you've used pesticides in your garden, you'll know from the labels they're dangerous chemicals that need to be used carefully.

Our national food regulator, Food Standards Australia New Zealand (FSANZ), has set maximum residue limits (MRLs) for pesticides permitted in specific foods. MRLs are so small as to be measured in parts per million and they include a substantial safety margin.

Despite this, some experts argue that there's still an element of risk even at these low levels, and especially when we're exposed to a daily cocktail of different pesticides. Evidence is growing that pesticides could be increasing our risk of some cancers, Parkinson's disease, and impaired cognitive development in children.

And washing doesn't necessarily remove the pesticides from strawberries. Some pesticides are systemic (which means they penetrate right through the fruit). Others are formulated to resist being washed off by rain.

In 2008 we bought strawberries from Coles and Woolworths supermarkets and independent Sydney suburban fruit shops (three of each). We also bought some from organic food specialists and from small organic food markets (again located in different Sydney suburbs). For comparison, and to increase the number of individual growers sampled, we also bought strawberries from the Sydney Markets at Flemington.

When an outlet had strawberries produced by more than one grower, we bought five punnets of each. We always chose the best-looking strawberries on offer, like any other customer would.

An expert examined each sample of strawberries and estimated the percentages of:

We then tested the strawberries from each grower for pesticide residues. Altogether we tested strawberries from 31 growers in all states (except Tasmania and South Australia) – 27 were conventional growers and four were certified organic growers (who shouldn't be using pesticides).

The test method was able to detect any of 150 different pesticides. We found the following in one or more samples:

Some of the results were particularly concerning.

MRLs are very conservative. It's highly unlikely that a few strawberries with pesticides above the MRL will do you any harm, but we know very little about the pesticide levels in other fruit and vegetables, and long-term overexposure could be of concern.

The fresh fruit and vegetable industry has its own internal national testing program – called FreshTest – but the results aren't made public.

Our results highlight the need for truly independent, comprehensive and regular testing on a national basis, as is done in the UK. CHOICE welcomed the decision by Food Standards Australia New Zealand (FSANZ) to include pesticide residues in its Australian Total Diet Survey 2008. This was a step in the right direction, but no substitute for regular and comprehensive testing.

If you want to minimise your family's exposure to pesticides, organic is the way to go. Independent testing has consistently found much lower levels of pesticide residues in organic than in conventionally grown produce.

If you still fancy strawberries after all that talk of pesticides, where will you find the sweetest and tastiest ones? All too often, strawberries look wonderful in the shop but turn out to be bullet-hard and tasteless when you get them home, with a percentage of them usually inedible because of rot or other blemishes.

This is why we also put our strawberries to the test for edibility, checking them for blemishes, rot and ripeness.

There are several factors to consider when buying strawberries:

Unlike some fruit, such as bananas, strawberries don't develop their full flavour unless they're allowed to fully ripen on the vine. But often they're transported over long distances and wouldn't survive two or three days jolting in a truck unless they were picked under-ripe.

So under-ripe, flavourless fruit is the price we pay for having strawberries from interstate when there are no local ones available.

If you want flavour and sweetness, look for fully ripe fruit. There's a trade-off, though, as ripe fruit is more likely to have blemishes. But you can cut any blemishes off – a small price to pay for tasty strawberries.

Strawberries taste best when they're fresh

Strawberries start to lose flavour as soon as they're picked, so the longer it takes to get them from the farm to your plate, the poorer the flavour. And the flavour deteriorates faster than the strawberries themselves. They can still look perfectly OK a week after harvesting, but they won't have much flavour left.

A punnet of strawberries usually has a sticker showing the grower's name and the district where the strawberries were grown. You can improve your chances of getting tasty strawberries by avoiding fruit that's travelled a long distance. There's no guarantee that the strawberries at your local produce market have been locally grown.

At the three markets where we bought strawberries, only one stallholder had local fruit that he'd grown himself. At another Sydney market we only found strawberries grown in WA.

Some varieties taste better than others

It may not be obvious when you buy them, but strawberries come in different varieties (just as apples can be Golden Delicious, Pink Lady, Granny Smith, and so on) and some varieties have a better flavour than others.

Breeding programs have recently been producing some really tasty new varieties of strawberry, but as far as the consumer's concerned the effort's been wasted. None of the strawberries we bought had the variety stated on the label or displayed in the store. When we asked sales staff at each of the 15 outlets where we bought strawberries, only one could tell us the variety (the market stallholder who'd grown them himself).

Occasionally you might see the variety on the small label stuck to the punnet, and there's a space for marking the variety printed on the cardboard trays in which the punnets of strawberries are supplied to shops. But on most of the trays we saw at the Sydney Markets the grower hadn't bothered to mark the appropriate square.

Varieties to look for

Here's how to boost your chances of getting strawberries that taste as good as they look: