Create your own streaming platform with Serviio or Plex 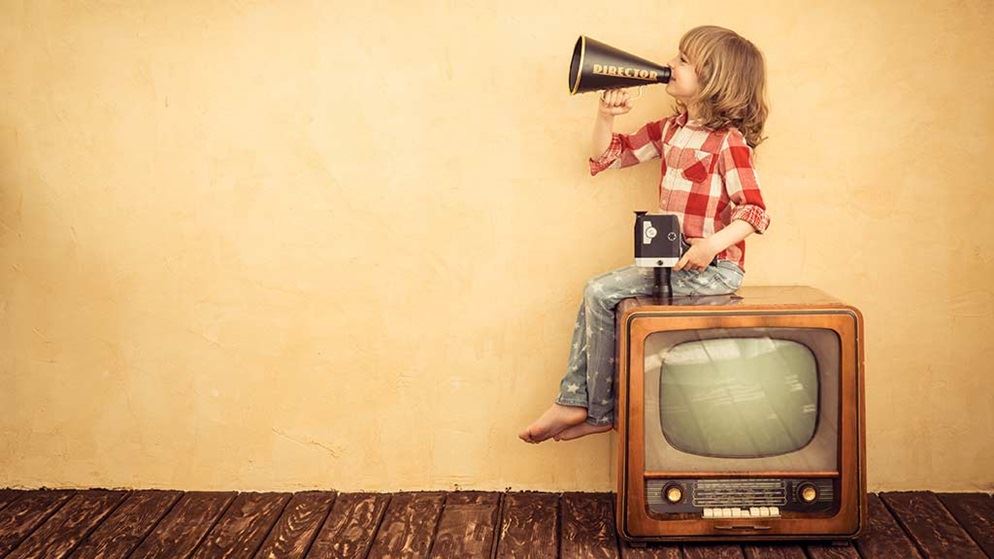 Streaming server software can turn your digital media collection into an organised, easy-access library for your whole home network. We compare two of the main players – Serviio and Plex – and take you through how to set up and use them. And with the demise of Windows Media Center in Windows 10, you need new options for watching your own movie and TV show files on your smart TV.

The first step is to create a home network – wired or wireless – with a router and a modem so that your computer and smart TV can 'talk' to each other to share your content. Next is an audit of connected devices that could be part of your network. A network usually needs a 'server' (but not always) – a computer that streams (or 'serves') content to 'clients' such as TVs and other networked devices.

For advice on choosing the best TV, see the test results in CHOICE's smart TV reviews.

Connect devices to the network

To start joining the dots, connect the computer to your router using a wired connection with an ethernet cable, if possible. Unless you've run cable through your house to make a wired network, connected devices such as smart TVs, games consoles and Blu-ray players located further away from the router can connect wirelessly (using Wi-Fi). A powerline adapter (ethernet over power) can also be used to extend a wired network. Mobile devices such as tablets and smartphones will also connect to the network using Wi-Fi.

The smart TV should support the plug-and-play protocol called DLNA that allows devices on the network to 'see' one another and 'talk' to each other to share content. DLNA is used in a huge array of home entertainment and computing products including TVs, tablets, computers, audio players, network speakers, NAS (network attached storage) drives and printers.

The Digital Living Network Alliance (DLNA) protocol should show up in the TV's setting and is supported by Microsoft as well as most major electronics companies. See dlna.org/consumer for more information. 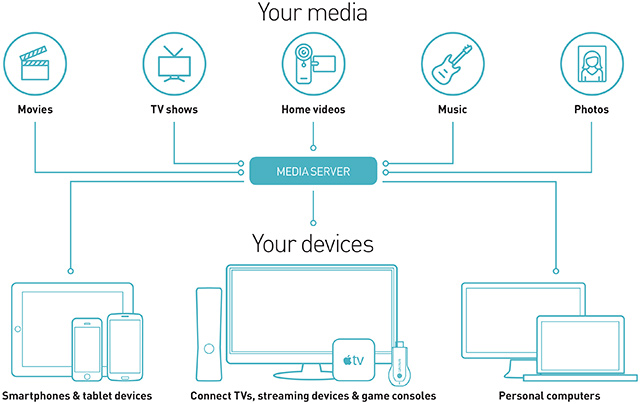 Apple isn't part of the DLNA so you'll need to run third-party streaming server software such as Serviio or Plex on your computer to stream movies and TV shows stored on your computer or NAS drive (although the NAS drive may be able to run a server of its own) to your smart TV.

Another option is Apple TV which can play shows on your TV that you stream from your PC or Mac through iTunes. It's also possible to use a server app such as AirVideo HD that runs on an iPad or iPhone to stream shows to your TV via your Apple TV. The latest model Apple TV (fourth-generation) lets you install streaming server apps on it, including AirVideo HD and Plex.

What sort of network do you need?

A PC running Windows Media Center connected to a router and a smart TV or internet-connected device – such as a games console, Blu-ray player, DVD player, PVR recorder or an AV receiver – can construct a basic home network to stream content.

However, Microsoft announced mid last year that it had finished with Media Center and would not support it in Windows 10. If you have an earlier version of Windows and you install Windows 10, Media Center will be removed. In this case, you'll need streaming server software such as Serviio or Plex.

If you have movies and TV shows along with digital photos and music on your home computer and you want to watch one or more stream on your smart TV or mobile device, then you'll want a streaming media home network. This will let you browse content and watch videos from online sources such as YouTube, PBS and TEDTalks. Your content can all be stored on the computer that is connected to your router, and the other devices can be connected (wired or wirelessly) to your network to watch on multiple devices.

If you have a PVR connected to the network, then content recorded from free-to-air TV can be watched on any network-connected TV (as long as it supports DLNA).

Streaming server software such as Serviio or Plex is needed to stream content from external hard drives and, if you have two or more TVs, you can watch content on either TV. Photos and music can also be streamed to the TVs and other smart devices such as games consoles.

See our external high-capacity desktop hard drive reviews to get an extra 3 to 6TB of storage space for your movies and other media.

3. The Internet of Things (IoT)

If you want all of your devices to talk to one another through wires, then you'll need to plan it out first. A wired network can connect to hardware devices including TVs, PVRs, DVD players, network music streamers and speakers as well as some internet-connected appliances. It's possible to stream shows, music, TV, radio and photos throughout the network to all your devices including smartphones and tablets and even access content remotely when away from your home using streaming server software such as Plex and Serviio.

If you want to expand your network beyond Windows Media Center, then you're going to need to make friends with streaming server software such as Plex or Serviio. There are others, such as Twonky, but we're going to cover these two in this article. 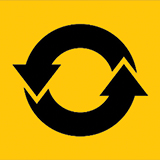 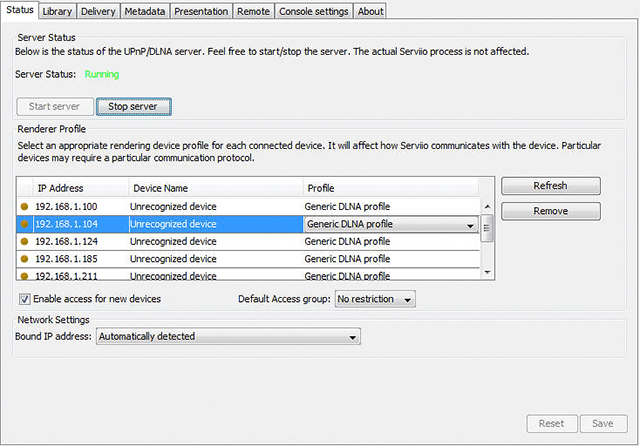 1. Install Serviio on your computer. Serviio includes a console that runs on your computer and is the interface for customising the application; and it also installs the server component that allows it to stream content to your devices.

2. Get to know Serviio console The Status tab shows that the Serviio server is running and lists playback devices. The Library shows the content folders. Delivery has settings for remote access and for transcoding and subtitles. Metadata controls how Serviio searches for file information. Presentation lets you choose which categories are shown for organising files. Remote allows external viewing. Console settings controls language and updates.

3. Choose playback devices Serviio includes a list of devices such as TVs, DVD players, media players and games consoles with pre-set profiles to choose when you first get started. If you have an LG TV, for example, it's advisable to choose the LG TV profile to ensure the TV can play supported media formats through Serviio.

4. Set your library Go to the Library tab and click the Add local button to select folders on the computer that will be part of your multimedia library. Choose the file type for that folder using the video, audio and image icons and choose whether the metadata should be retrieved. 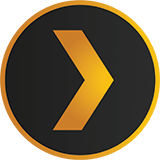 Plex (free/$6.50/month for Plex Pass) will run on Windows, Mac and Linux as well as iOS and Android devices. To download, go to plex.tv.

Compatible devices include the Chromecast, Android TV, Xbox, PlayStation, Roku and some NAS devices. You'll need to install a Plex app on these devices, some of which are free, others you have to pay for. Plex Pass provides a range of extra features such as offline viewing, cloud sync to watch content stored in DropBox, OneDrive and several other storage services and photo sync from mobile device to home Plex server.

Playlists can be created and recently-added content and last-watched shows highlighted on the dashboard called 'On Deck'.

Channels is the way to find online videos on sites including TEDTalks and PBS. 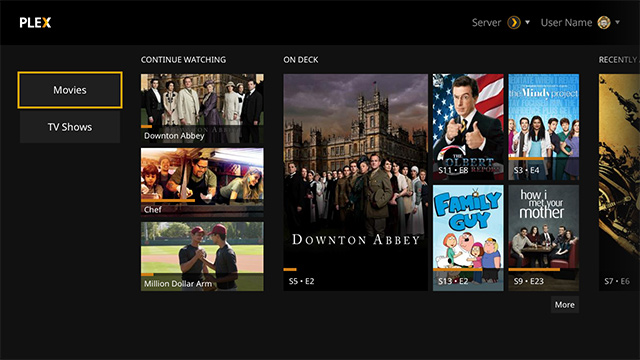 1. Download the computer version (or the NAS version if that's where you're going to run it) and then open the application. It contains the server app, which manages the library, and a player application. You'll need to install Plex apps to playback on other mobile devices.

2. Sort your media It's best to separate your different types of media as Plex identifies them according to your file structure. Do a bit of media housekeeping and put music, TV shows, movies, photos etc. in their own folders before you start.

3. Assign media then open Plex on your computer and it will show your home library. Next, use the + sign to add media to your library. Choose the type of media, such as movies, photos or music, then add a folder.

4. Navigate to Channels to select online videos and audio to stream from places such as SoundCloud, Vimeo, Ted and numerous other sources, although access will depend on your location if it's geoblocked.

5. Customise Use Playlist to make custom lists of music or videos for specific purposes.

Serviio vs Plex: Which one is right for you?