Hands-on with the latest version of the Star Wars augmented reality (AR) experience. 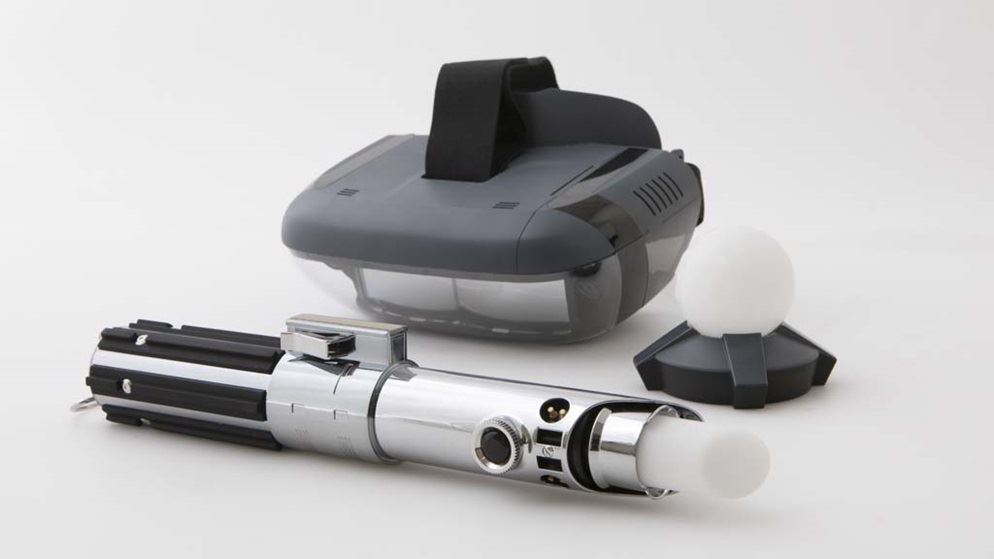 May the Fourth will soon be with you, and now's the time to become a Jedi because the Star Wars: Jedi Challenges augmented reality (AR) kit has been slashed to a quarter of its original cost. We take an updated hands-on look.

Major stores have Disney's smartphone-powered AR experience-in-a-box for just $99 and though it's been more than a year since our original review, the Jedi Challenges app has since had a couple of big updates to help keep it fresh.

The Dark Side Expansion added the ability to play as Kylo Ren and go head-to-head with Rey and Jedi Master Yoda and even real friends (with a second AR kit).

The original version of Star Wars: Jedi Challenges was a novel idea executed well, though it lacked enough content to easily justify the $399 price tag.

The two free updates since then have filled out the roster and added quite a bit of extra content which, considering the now much-reduced $99 price tag, makes this a much more attractive proposition.

We updated our app and tried out Jedi Challenges with the latest iPhone XS Max and found it worked fine, even though the website lists the most recent supported iPhone as the older iPhone X model, with Samsung represented by the Galaxy S8.

If you have a more recent Android phone you'll probably find it works fine too, but check your retailer's return options when buying.

Both updates add up to quite a bit of extra content over the original app, which was quite a bit of fun for Star Wars fans, though there's no indication that more content will be coming down the line.

Latest reported rumours are that the Lenovo Mirage AR headset that's the backbone of Jedi Challenges may get a second chance with a Marvel-themed game in coming months, but don't depend on it.

The kit equips you with an authentic-looking physical lightsaber replica as a controller for duelling face-to-face with life-size virtual opponents including Darth Vader, Kylo Ren and the good guys Rey and Yoda, plus an assortment of stormtroopers.

Slip your smartphone into the Lenovo Mirage AR headset and place the single tracker beacon on the floor to create your virtual zone almost anywhere in your house.

Holding the lightsaber is always a bit of a thrill

The mixed-reality headset also lets you keep an eye on your real surroundings, so you don't go crashing into the furniture, rather than the fully self-contained world of VR (virtual reality).

The Star Wars-themed experience lets you play a Jedi Master in strategic combat, lightsaber battles and holochess, the latter being a nice nod to the original Star Wars movie where the game featured briefly.

Excited pre-teens will likely need the help of an adult to set up the system, which we found kind of fiddly.

You need to turn on and set up the app, following onscreen instructions, before slotting the phone into the headset via a caddy.

The caddy has guides to position various phone sizes, and you need to adjust the locks on the mount to get your phone sitting just right.

There are three buttons on the headset and two on the lightsaber and you navigate the on-screen menus using a combination of lightsaber movements and tilting your head. While fairly intuitive for adults, this will take time for younger kids.

Place the tracking beacon (a glowing multifaceted ball with two colour options) on the floor or a table to designate the play space. This might also take a little experimenting to get right.

This is fun and pretty much exactly what you'd expect if you've seen the movie, matching the appearance of the hologram in the first-released Star Wars film, to give it a nice retro vibe.

This real-time strategy (RTS) game retains the top down diagonal perspective from traditional RTS games such as Age of Empires. It lets you move around the battlefield by walking or tilting your head, though it doesn't change perspective.

However, the controls and combat options are simple given that you don't have a keyboard and mouse. Experienced RTS players might find it loses its charm fairly quickly.

This is where the headset really shines. You can fight droids, Stormtroopers and major heroes and villains early in the game. The tutorials are good, and defeating a recognised Star Wars champion (of good or evil) is very satisfying.

Holding the lightsaber is always a bit of a thrill, especially when you hear that iconic power-up sound (use headphones for best effect). Combat is fun in practice at first, though you quickly find you don't need real Jedi-class lightsaber skills since you can just wave the thing around like crazy until you hit your enemies.

There's some simple strategy involved as some enemies can only be cut down, while others won't come close enough, so you need to deflect their bullets. Again, this doesn't require pin-point accuracy to smack a bullet in kind of the right direction and land a direct hit.

They've done a good job of making the lightsaber feel realistic, though you do need to regularly hit the re-centre button as the blade drifts off course a tad.

All the games have levels and unlocks and you'll need to work your way through stages to unlock new powers and different ways to play. For example, early on you can unlock a 'force throw' that lets you go full Obi-Wan and blast people back with a wave of your hand (in this case, pushing the lightsaber forward).

But like so many VR and, to a lesser extent, AR games, it doesn't take long before this starts to feel repetitive and there's no storyline to hold your attention.

However, you can see they've put some thought into adding variety beyond the simple gimmick of using a lightsaber. The unlockables that actually impact gameplay are cool, as are harder and harder enemies that require different strategies.

The headset with a phone on board is still a bit on the heavy side for extended gameplay, especially for kids, and it's most noticeable when continually looking down to play the RTS game.

It also may not sit super securely on your head without some trial and adjustment, and when you inevitably start bobbing about and flicking your head in the heat of battle, the headset can shift position, making enemies blurry and hard to hit.