How food companies are giving supermarket snack foods a health halo by creating their own canteen approved labels. 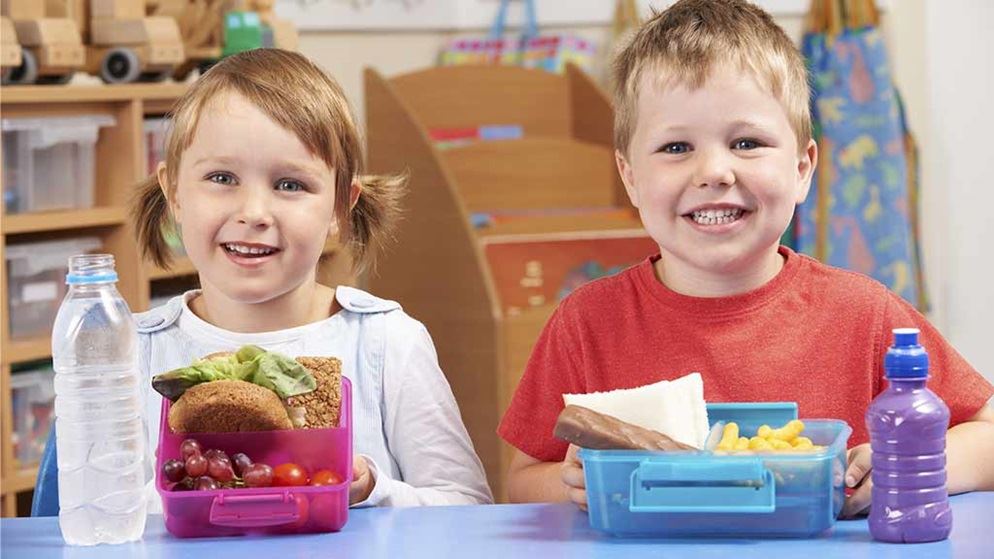 Preparing and packing a healthy school lunch for your child every day of the week can be hard work, particularly when you're in a rush to leave the house in the morning. As well as core items like a sandwich and fruit, you need to have on hand a variety of interesting snack options – preferably foods your kids will eat – and pre-packaged lunchbox snacks offer a practical and convenient solution. But when you're grocery shopping and trying to choose between products, it's not always obvious which snacks are healthy and which aren't.

A swathe of 'school canteen approved' and 'meets school canteen guidelines' claims and logos have found their way onto the packs of certain snacks sold in supermarkets. I Quit Sugar crusader Sarah Wilson first alerted us to this issue, and since then we've come across 17 different company-created canteen approved labels, most making reference to the National Healthy School Canteens Guidelines and/or at least one of the state-based canteen guidelines.

Logos have no bearing on healthiness of snack

On the surface these logos appear helpful – after all, if products have been approved for canteens, you'd assume they'd be a good option for the lunchbox. But on further investigation, we discovered that not only were these certifications created by the food companies themselves, they predominantly appear on processed snacks with little or no nutritional value – and their presence is leading parents to believe these products are a healthier option for their children.

Guidelines for canteens, not supermarkets

School canteen guidelines are designed to help canteen managers make healthier food and drink choices for school canteens. The guidelines use traffic light criteria to classify foods as green (described as 'choose plenty', 'every day' and 'fill the menu', for example), amber ('select carefully') or red ('occasionally', 'not recommended').

But the guidelines can vary between states so food companies can reference guidelines they meet but ignore guidelines they don't (see Pick & Mix Canteen Guidelines). And the 'canteen approved' logos we've seen in supermarkets are overwhelmingly being used to promote foods categorised as 'amber' - a large proportion of which would be considered 'discretionary foods' under the Australian Dietary Guidelines. These include treats such as sweet biscuits, chips and other fatty or salty snack foods, which are surplus to requirements and should make a limited appearance in most people's diets.

The most recent National Nutrition survey highlighted that over one-third (35%) of our total energy consumed is coming from discretionary foods - for children aged 14-18 it was a massive 41%. So promoting these types of products as 'approved' or 'meeting guidelines' is irresponsible – particularly when one in four children in Australia are overweight or obese.

Often products fall short of being classified as 'red' because of their small serve size. If you run the nutrition stats for Jumpy's potato snacks through the Health Star Rating (HSR) calculator they receive just one star, for example. But the product still meets the NSW canteen guidelines' kilojoule, saturated fat and sodium criteria for an amber food because it's a tiny 18g pack.

The logo on the little 25g packs of Arnott's Chocolate Tiny Teddy (two stars) says they meet amber school canteen guidelines. The 200g box of the same product carries the logo too, but in reality it would meet amber guidelines only if you dole out the precise serving size (13 biscuits) recommended in small print on the nutrition information panel – more, and you'd be heading into red territory. But is it reasonable to expect consumers to know the logo only relates to consuming a specific amount?

The South Australian canteen guidelines acknowledge that some foods best avoided might meet criteria due to their small serving size, and encourage schools to "avoid energy-dense, nutrient-poor foods, even if, on assessment, they do not fall into the red category (ie by change of package size)". But that caveat is missing in the supermarket setting, where a 'canteen approved' logo could make shoppers see an otherwise unhealthy product in a more positive light.

Another reason why the presence of these logos on supermarket products is concerning is the potential for them to encourage regular consumption. All the existing school canteen guidelines use the words "select carefully" when referring to foods in the amber category. As well as avoiding large serving sizes, this means reducing or limiting the number of amber foods on the menu and offering these foods only on certain days of the week or limiting the selling time. But when you see the label in the supermarket, you won't necessarily know this. A few products provide information about the criteria met or the meaning of 'amber' in small print on the back of the pack or even on a website, but most don't.

To get an idea of how much influence these labels can have, we surveyed more than 1000 parents from a broad range of demographics across Australia, showing them a range of the canteen approved logos that appear on supermarket products. We found that 43% believed that products with these logos are healthier than similar products without logos. And 42% would be more likely to choose a product with one of these logos than a similar product without the logo.

It's clear that the 'school canteen approved' claim creates a health halo over products that display it, and can be a powerful marketing tool for food companies.

Of the parents we surveyed, only 38% thought they needed to limit the amount of these foods that their child eats – a third thought foods with these logos are suitable to be eaten every day. In fact of those parents surveyed who've purchased products with these types of logos, 59% of them give them to their children 2-4 times per week or more.

Dr Kieron Rooney, nutritionist and senior lecturer in the Faculty of Health Sciences at University of Sydney has been vocal in his criticism of how food companies are using canteen guidelines to market products.

"The placement of these logos on foods that are available every day is a misrepresentation of the guidelines", he told us. "The guidelines are specifically to inform canteen managers on how to prepare their menus; that is, amber foods products should be selected carefully and are not to dominate the menu. By placing these logos on foods available in supermarkets without the appropriate explanation on what they represent, the companies are encouraging everyday consumption of their amber products."

'Canteen' logos are not approved or regulated

According to our survey results, 43% of parents believe these logos have been approved by an independent authority or government body, and more than one-third think that the use of these logos by food manufacturers is regulated. But this isn't the case.

Food companies have created their own logos to "help consumers make easier and more informed choices" in the words of Arnott's, but there's no authority that monitors their use, or checks their self awarded 'canteen approved' status against the existing school canteen guidelines.

Self-made certifications referencing school canteen guidelines can give the impression that these products are a healthier choice for children and suitable for regular consumption. We think the use of these logos to market processed snacks of negligible nutritional value in supermarkets is both inappropriate and misleading, and that food companies should remove them from their products. In fact, CHOICE has referred products with school canteen approved claims to the ACCC, asking the regulator to determine if the claims are misleading and a breach of Australian Consumer Law.

UPDATE: We awarded Arnott's Tiny Teddy biscuits a Shonky for its self-made 'canteen approved' logo. Arnott's has since announced it will remove the logo from its Tiny Teddy and Shapes packs by mid-2016.

The details within the state-based and national school canteen guidelines vary. In SA, for example, all soft drinks, artificially sweetened soft drinks, energy drinks, sports drinks, flavoured mineral waters, sports waters and fruit drinks are automatically classified as red, and banned from sale in schools. Whereas in NSW these types of drinks can be categorised as amber rather than red - as long as they meet criteria for kilojoules and sodium per serve.

The national guidelines have a limit of 2g saturated fat per serve of savoury snack foods and biscuits above which they'd be classified as red, whereas the state guidelines have a more generous limit of 3g per serve. And while all guidelines advise that 'confectionery' falls into the red end of the spectrum, only the national guidelines define confectionery in detail as "All types: sold separately or added to products including; boiled lollies, carob, chocolate (including choc chips and chocolate-coated), chocolate spreads, cough lollies, 100s and 1000s, juice jellies, icing, liquorice, soft lollies, yoghurt/ carob-coated." Other guidelines are looser in their definitions and don't specify whether their classification of all confectionery as 'red' extends to products with confectionery added.

Food companies can use these inconsistencies to their advantage, cherry-picking the guidelines that favour their products and referencing these in their self-made logos. Arnott's choc-coated and hundreds and thousands sprinkled Tiny Teddies, for example, contain added confectionery so don't meet the national canteen guidelines (and according to Arnott's own website receive a HSR of just 1.5). But this doesn't stop them from mentioning NSW, Queensland and Victoria guidelines in the footnote to their logos. And Aldi's Belmont Biscuit Co Hundreds & Thousands Teddy Tots don't even comply with the national guidelines it references in its self-made logo, since they're sprinkled with hundreds and thousands.