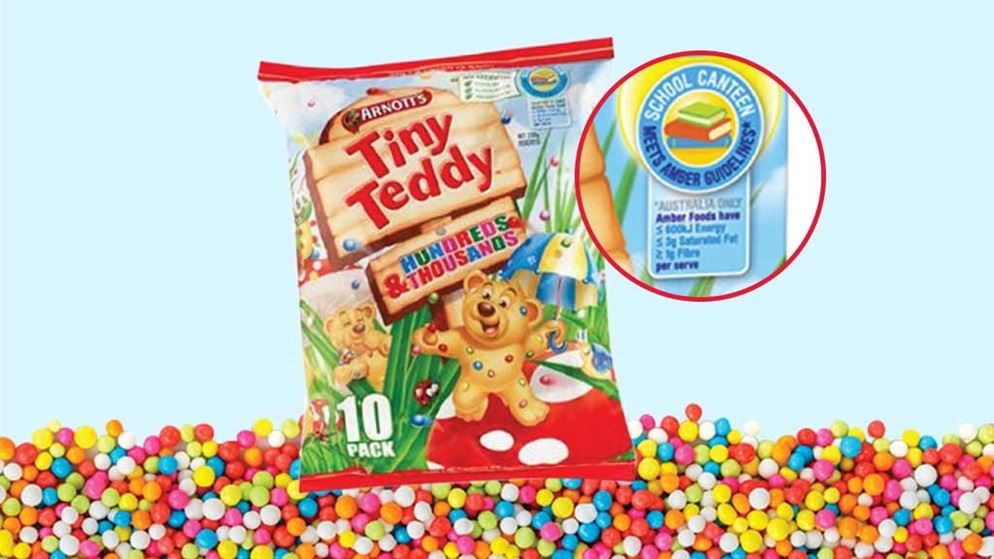 CHOICE has welcomed the announcement that Arnott's will remove its self-made school canteen logo from its Tiny Teddy and Shapes packs by mid-next year.

But according to the School Canteen Guidelines, which are designed to help school canteen managers make healthier choices, an 'amber rating' means they should be 'selected carefully'.

The move comes following our awarding of a Shonky to Arnott's Tiny Teddy biscuits in early October and the launch of a campaign against these dodgy, self-approved canteen logos.

CHOICE found that these logos predominantly appear on processed snacks with little or no nutritional value, with 10 of the 17 products we found receiving a Health Star Rating of 2.5 or less. This included products such as Arnott's 100s & 1000s Tiny Teddy biscuits, Monster Noodle Snacks and Parker's Pretzel Snacks. None of the products received five stars and only two received four stars.

In a statement, an Arnott's spokesperson told CHOICE: "Arnott's is in the process of updating our Tiny Teddy and Shapes formulations and packs for the first time in many years. As part of this work, we are focusing on the new Government Health Star Rating System and moving away from the Canteen Guidelines.

"Beginning early next year, references to the canteen guidelines will be phased out on the front of pack for Tiny Teddy and by mid next year will be entirely removed from all Shapes and Tiny Teddy packs."

The move by Arnott's towards Health Star Ratings and away from School Canteen Guidelines is a welcome one.

Do logos equate with healthy?

Our investigation found that most self-approved school canteen logos made reference to the National Healthy School Canteens Guidelines and/or at least one of the state-based canteen guidelines.

These labels aren't accredited or approved by an independent body, but created by the food companies themselves.

Despite this, our research found 43% of parents believe these logos have been approved by an independent authority or government body, and more than one third of respondents to our survey think that the use of these logos by food manufacturers is regulated.

CHOICE is calling on other food companies to follow Arnott's lead and remove these misleading logos from their products.