We put the spotlight on candy that leaves more than just a sour taste in your mouth. 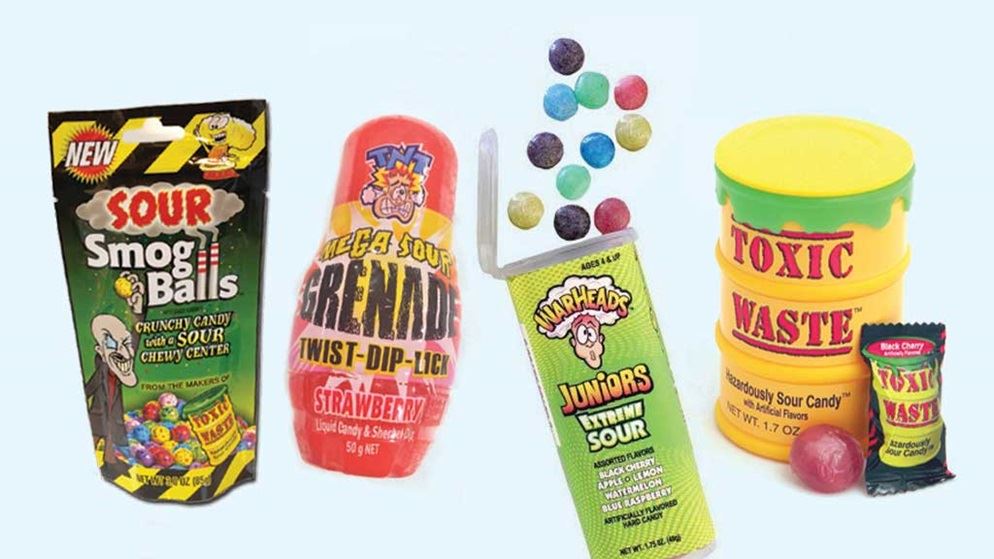 When a woman posted a picture on Facebook of the "hole" in her son's tongue, alleging that it was the result of him eating Warhead sour lollies, the story received international attention. People were horrified that a lolly could have this effect.

On investigation, we found that this type of damage is not unheard of. A number of years ago the UK Food Standards Agency even issued a warning to parents about a possible risk to children from particular sour novelty sweets after receiving reports of them causing blisters, burns and bleeding to the tongue and mouth.

Similar sour novelty sweets are readily available in Australia through dedicated lolly shops, convenience stores and service stations. Many mainstream confectionery favourites (Skittles and Haribo gummy bears, for example) have a "sour" version too, and even the major supermarkets sell sour lollies under their own brands.

But how much harm can they really cause?

We reached out to our Facebook community about sour lollies and the response was astounding. Alongside nostalgia for the pleasure and pain associated with eating sour lollies as a child, parents shared reports and images of their children's symptoms after eating them.

"Within seconds my daughter started saying her tongue was stinging. As she went to touch it her skin just peeled away and she was left with a raw hole." – Peggy

"Virtually straight after my daughter ate a couple of the lollies she told me her tongue felt funny. She showed me and to my horror about a 1–2mm deep layer of the surface of her tongue had come away. She had about a week or so of painful healing," says Kylie.

"[My son] went for a sleepover and after having these he ended up with massive mouth ulcers and off to the dentist!" says Bec.

"My daughter had bleeding of the tongue and at least a layer was removed," recalls Jessi.

So how are sour lollies causing this damage?

We sent 20 different sour lolly products off to the lab to analyse their acidity. Each product contained between one and four different food acids, most commonly citric acid and malic acid, which give the lollies their 'sour' taste. We also included samples of orange juice and cola – both commonly considered to be acidic – and several popular non-sour confectionery products for reference.

Our tester measured titratable acidity (TA), which is the total amount of acid present. The higher the TA, the more difficult it is for saliva to neutralise the acid.

Our tester also measured the lollies' pH, which indicates the strength of the acid. A neutral pH is 7 – and the lower the number, the more acidic a product is. We've listed the pH of all products tested in the results table, but in summary:

If you're sucking and holding a lolly against your tongue, cheek or gums for extended periods of time, and its pH is very low, it's hardly surprising that it might damage these soft tissues.

Video: Sour lollies not so sweet

Symptoms like bleeding, ulcers and layers of skin peeling away are very unpleasant. Kids might find this kind of damage painful for a number of days, particularly when drinking or eating. But the symptoms tend not to be permanent and the soft tissues of the mouth will usually repair without much problem. The more insidious issue with sour lollies is their increased potential for irreversibly damaging teeth.

Drinks and foods that combine both a lot of sugar and high acidity have the potential to cause the most harm.

Every sour lolly product we tested:

Not surprisingly, all of the sour lollies would be considered high-risk for teeth.

Tooth decay is caused by bacteria in plaque, which forms as a layer on the surfaces of teeth. These bacteria use sugar for energy, and produce acids as a by-product that can damage the crystals of the teeth. The more often you have sugary foods or drinks, the more acid the bacteria can make and the more damage that occurs.

Dental erosion is the irreversible loss of the outer crystals of the tooth caused by acids that come directly from foods or drinks (or from stomach acids regurgitating into the mouth). Every time an acidic food or drink passes your teeth and drops the pH in the mouth below 5.5, there is a chance the outer crystals are dissolving and reducing the amount of tooth that you have left.

Fortunately, your teeth are constantly bathed in saliva, which can help dilute and neutralise acids. However, if salivary flow is poor, or if sugary or acidic foods are consumed too regularly, damage is more likely to occur. 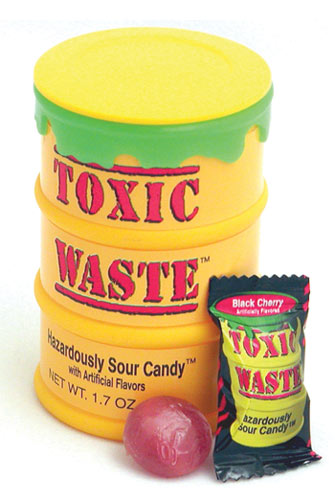 Of course we all know that lollies are bad for us, but are lollies that cause blisters, burns and bleeding to the tongue and mouth taking it a step too far?

Granted, some of the more acidic products such as Warheads, TNT and Toxic Waste carry warnings. For example: "Eating multiple pieces at the same time or within a short time of each other may cause an irritation to sensitive tongues and mouth. This may vary from a slight irritation to a severe reaction depending on the individual."

With a product like Toxic Waste Hazardously Sour Candy, which recommends a serve size of five pieces and challenges you to see how long you can keep one in your mouth (60 seconds and you're crowned a "full toxie head", just 15 seconds and you're branded a "total wuss"), the caution in smaller print at the bottom of the pack seems little more than a token gesture. Our guess is that children are more likely to accept the challenge than heed the warning.

They're never going to be healthy, but at the very least we think the lollies that kids have access to should be safe. If they're acidic enough to warrant a warning about the potential for causing a severe reaction, or require that you flush your eyes with water if they come into contact, we think this is a cause for concern.

There's currently no general safety provision under Australian Consumer Law (ACL) that companies have to comply with, and we think one is needed.

CHOICE is calling for a general safety provision to be written into the ACL when it is reviewed later this year. This will mean that products sold in Australia must be safe.

Vitamin C (ascorbic acid) has a low pH and high titratable acidity. Regularly chewing vitamin C tablets has been associated with the development of tooth wear. Our test returned a pH of 3.28 for popular children's supplement brand Nature's Way Kids Smart Vita Gummies Vitamin C + Zinc. To avoid damage to teeth it's recommended that kids rinse their mouth out with water after having these types of vitamin C supplement, and have them with a meal rather than just before bed.

pH is a measure of the acidity of a product. Foods or drinks with a pH below 5.5 can cause erosion of the tooth enamel.