These days, car keys can do a lot more than just lock your doors. But convenience can come at a cost. 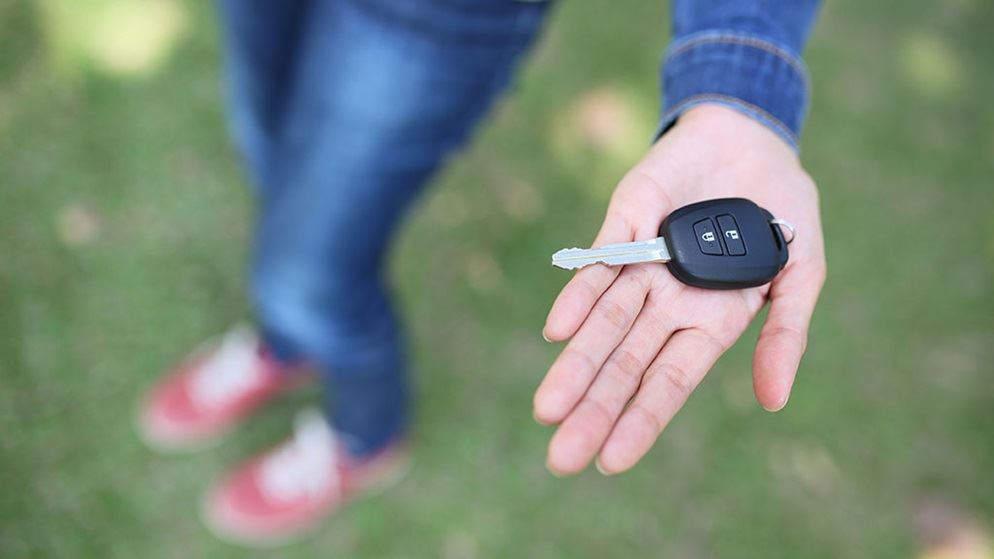 Replacing a lost car key used to be simple – you'd take the spare to your local key cutter and for about $10 you could have a copy made. These days, however, it's a different story.

Not only does the modern car key start your car, it can also unlock the doors remotely and provides extra security thanks to transponder technology. All of this is great news until you lose or damage your keys – and discover you're up for hefty replacement costs.

Many car owners have no idea how much their keys are worth until they lose one, says car key industry expert and product manager at Locksmiths' Supply Company, Tom Stokes. Most people are shocked when they discover they are up for hundreds of dollars and time off the road just for a key.

CHOICE shadow shopped for replacement keys for 11 popular models at car dealerships in NSW and SA, and found the cost of a single replacement key ranges from $267 to $740. In addition to the cost, there are waiting times for ordering, cutting and coding the key – which could mean up to a full day off the road. A high price for losing something you have to carry with you on most days.

While the cost of a single replacement key is high, if you lose all the keys to your car, the costs and time off the road will increase significantly if the car's computer has to be reset or completely replaced to match the new replacement keys.

We were quoted from $1800 to more than $5000 for work done on various models of car, during which time the owner would have no keys to the vehicle to get it back on the road.

Independent industry experts told us that increasingly complicated technology used in car accessories, including keys, is a sales growth area for dealerships but can be a high-tech headache for car owners. 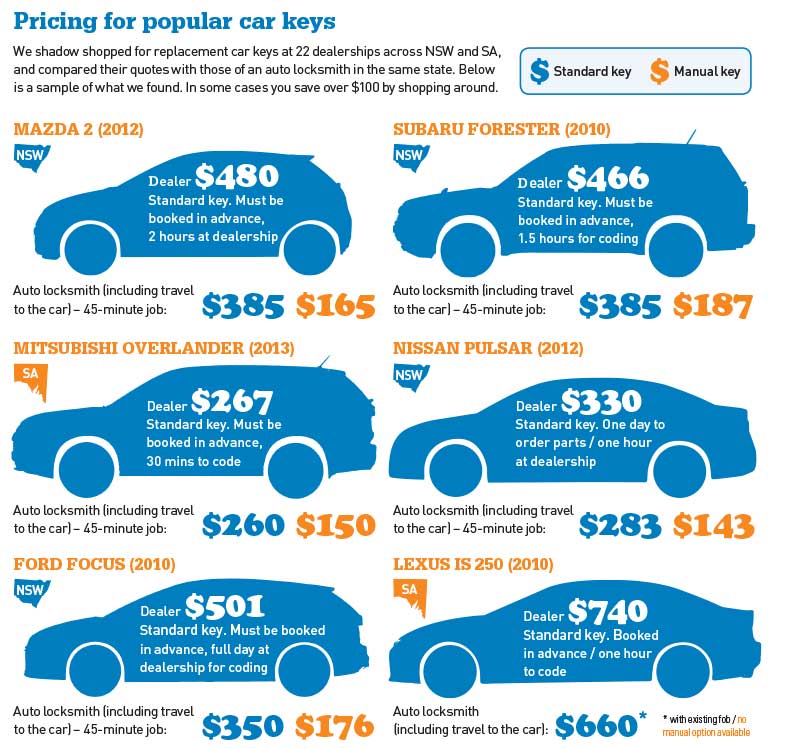 Auto locksmiths offer a legitimate alternative service to a car dealership to cut and recode modern car keys for most models. An added bonus is that they can come to you, which means you avoid the hassle of travelling to a dealership, which is a major issue if you've lost all your keys. In many cases they'll also charge less.

Northern NSW-based auto locksmith Adam Marotte has worked with modern car keys since their introduction to the Australian market. He says many people are simply unaware there's an alternative to going through the dealership. "We can cut and code the keys on the spot for most models of car, and we carry the equipment and parts to do so," Marotte says.

While auto locksmiths carry genuine keys, they also stock after-market keys (which may look different to the original). These work just as well, but cost less. Some carry diagnostic tools that can help reset the car's computer if both keys are lost.

There are more than 100 auto locksmiths working across Australia, but Stokes says that most people just tend to call their dealership. Or if they look in their car manual it'll often state that keys must be sourced from the manufacturer or dealer directly.

The Master Locksmiths Association can provide contact details for auto locksmiths at masterlocksmiths.com.au

If you're buying a car, be sure to ask about the keys before you sign on the dotted line. While most dealers will provide a new car owner with two full sets of keys, there's no legal requirement for them to do so.

Auto locksmith Chris Rose says he recently bought his daughter a new Ford and was only supplied with one fully remote keyless key – the second key was manual. When he asked for a second full remote key he was told it'd cost an extra $700. But the manual key involved a number of complicated steps to get the car running and is really an emergency key. Rose negotiated a second key as part of the sale, but notes this practice is on the increase.

CHOICE member Teresa says she bought a demonstration car from a dealership and was only given one key after she paid. When she asked for the second key they said if the car is used the dealership doesn't always get two keys. After finding out a replacement key would cost several hundred dollars, she argued with head office and finally received an extra key at no cost.

The latest innovation in modern car keys is the keyless, or proximity, key. It's a device you can keep in your pocket or bag that's recognised by the car, unlocks the door and allows you to start the car simply by pushing a button on the dashboard. It's convenient if you have your hands full of shopping or the kids, but this can come at a cost.

These keys are generally more expensive than their remote relatives, ranging between $400 and $800, and several CHOICE members have told us of their problems with this technology.

Graham said his key started having trouble being recognised by the car, resulting in him having to walk back and forth several times to get it to work.

A couple got into strife when the woman hopped out of the car with the key in her bag, leaving her husband to drive for another hour and stop before realising he was stranded and couldn't start or lock the car again without the key.

More worryingly, a Queensland woman locked inside her Audi Q3 in early 2014, which used the keyless technology. The car didn't recognise the key and wouldn't allow her to start her car or open the doors or windows on a 41°C day. Manufacturers say black spots can sometimes block the signal between car and key.

Victorian locksmith Chris Rose says keyless keys are becoming a lot more common in new cars. "They can be convenient, but you have to ask yourself: is the hassle when something goes wrong worth the convenience of not having to pull a key out of your pocket?"

Smart but not strong

Our readers have complained about problems with their keys wearing out, developing faults or breaking, resulting in an expensive replacement.

CHOICE member Daphne told us her Mazda 3 key needed a new battery, and after two attempts to replace it herself she went to her local dealership, which also couldn't open the key. She says the dealership accused her of tampering with the key by gluing it shut after dropping it. When she demonstrated that both the keys she had for the car wouldn't open properly, she was told she'd have to purchase a new key for more than $200.

Edward says he had a smart key for a Volkswagen where the plastic hook that allowed him to attach his key to a key ring snapped off.

When he asked if just the shell could be replaced with a new hook, he was told his only option was to order a new key at a cost of $600.

Danielle says when her Toyota key became loose she was left with just half the shell on the device, which resulted in the internal parts falling out and getting lost. The cost of a replacement key? Between $450 and $600.

The right to repair

As car parts (including keys) are becoming increasingly reliant on the car's computer, highly specialised equipment is needed to maintain and repair them. And some car keys now require unique PIN codes for the key to be "recognised" by the car's computer during replacement.

In many cases these codes are not provided to car owners, and are held either by the dealers or in some cases the manufacturers overseas, effectively locking independent mechanics, auto electricians and auto locksmiths out of the market. Auto locksmiths can't provide a replacement service for some car brands or have to invest in expensive diagnostic equipment to work without the code. This cost is passed on to customers.

In the US, independent car technicians can apply to access a register of PIN codes, which allows repairs, access to the car's computer and the ability to re-set car keys. This in turn allows car owners to choose who does the servicing and to shop around.

Earlier last year, the previous Australian government called for a code of conduct to be established between independent automotive repairers and manufacturers. After a review, the Commonwealth Consumer Affairs Advisory Council urged the automotive industry to "develop, within a reasonable period of time, an outcome (such as a voluntary industry code of conduct) that ensures there is a process for independent repairers to access repair information".

However, recently the car industry announced it was walking away from negotiations and intends to develop its own voluntary code of conduct.

In the meantime, there are concerns from independent auto locksmiths we spoke to that the industry is less accessible than ever.