Is this the answer to the dreaded flat tyre on the highway?

What is the Air Hawk Air Compressor?

It can inflate tyres and comes with a variety of attachments for bicycle tyres and sports equipment, as well as a blow valve attachment for products like air mattresses. It looks remarkably similar to the Air Dragon also on the market. 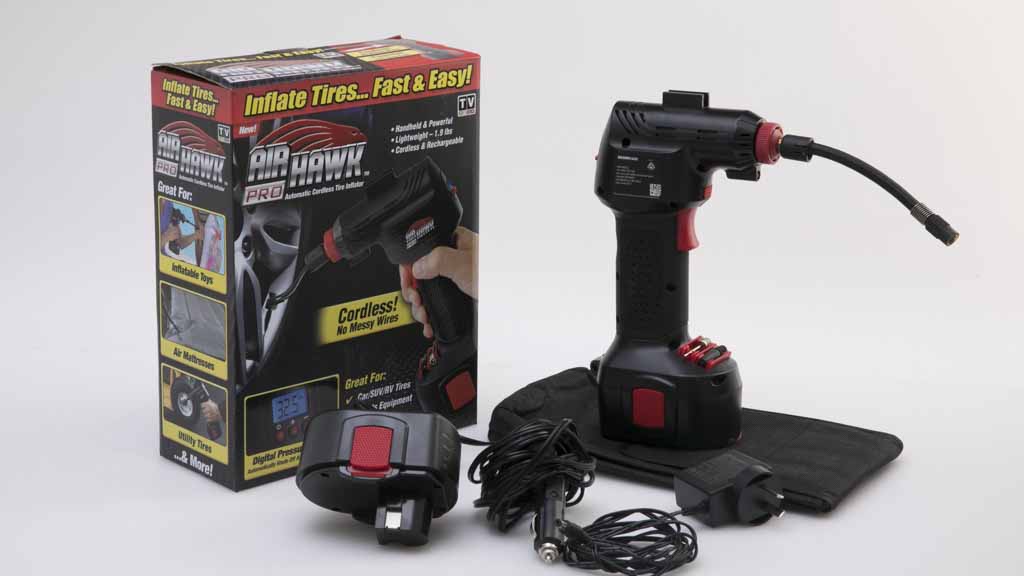 It comes in two versions: a Pro version with a charger for the battery that clips to the drill so you don't need a cord trailing behind you, and a normal version that comes with a 12V car adaptor.

The Air Hawk claims to be faster and easier, hyping its qualities in comparison to finding a petrol station, using a bulky air compressor or the effort of using a hand pump.

Following the provided instructions, the Air Hawk is very easy to use. It's light, at under a kilo, and once you plug in the battery or into the 12V car adaptor, it's a simple process to attach it to the tyre using one of a variety of attachments, pull the trigger and start pumping up the tyre.

Even the normal version has a 3.4m cord so won't require too much wrangling to get around to each of your tyres.

Both the Pro and normal versions only require a press of a button to change the pressure type (kPa, PSI and bar) which shows up on an LED gauge on the back of the device. It also lets you to pre-set a measure level and accurately shuts off once it gets to that level. And it turns off automatically after 30 seconds if unused.

Both versions also have an LED light built in to help you find the tyre inflation point in the dark.

Compared to using "a bulky air compressor" the Air Hawk is about half as fast. To fill a tyre from flat took us about nine minutes, whereas using one of the air compressors from our latest test took around four minutes. The valve and hose did get hot pumping up the second tyre we were filling from empty, so it's only suitable for doing single tyres from empty or adjustments to already partially inflated tyres. However, we're sure it would be faster than using a hand pump.

The Air Hawk gives you the the option of measuring the fill in PSI, kPa or bars, depending on how you like to read these measurements of air pressure. We found it was accurate within 1 PSI when measuring against a calibrated air pressure device.

At 82dBA, you wouldn't want to use this over an extended period of time given how close you need to be to it when pumping a tyre, but it's not designed for extended and constant use anyway so you shouldn't need to worry about the high noise level.

With a plasticky trigger and wobbly buttons at the rear for changing measurement levels, we can't say how long this device might last, or whether it might end up in the tip sooner rather than later with a lot of other TV shopping products, however it does only come with a one year warranty.

The Air Hawk air compressor is a handy device if you're stuck without access to another way of inflating your tyre. It's relatively fast given how small it is compared to the air compressors we've tested in the past, and it's very easy to use. We wouldn't rely on it heavily, as it heats up fairly fast.

It's suitable for adjustments to already partially inflated tyres so you can keep your tyres up to their specified range without needing to drive down to your local service station, or as a replacement for your hand pump on garden equipment or bicycle tyres. It may also suit people who regularly need to deflate and re-inflate their tyres depending on the surface they drive, such as sand.