For performing worse than water while costing 3000 times more 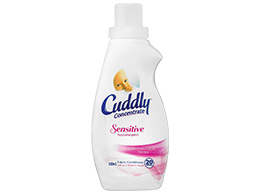 There are several drawbacks to fabric softeners. They add chemicals to your freshly washed clothes that may cause irritation to some people, and over time they cause a gunky build-up in washing machines known as scrud. They may also reduce flame-resistance in fabrics, which is why some fabric softeners come with a warning not to use them on children’s sleepwear.

The chemicals in fabric softeners reduce water absorption in fabrics, which is not much good for towels or nappies. For all this trouble, you’d expect that your clothes and linens would be fluffier than a teddy bear riding a cloud, or as “soft as a mother’s touch” as proclaimed on the Cuddly Sensitive Hypoallergenic bottle. However, this isn’t always the case.

What really got the lemony scent stuck in our nose, though, is the cost of Cuddly Sensitive Hypoallergenic. At $6 per litre, it’s a lot more expensive than tap water’s $0.002 price, and it’s more costly than many of the fabric softeners in our test. That’s one Shonky recipe for crunchy towels. Do you really need a fabric softener?

There's nothing like that great soft feeling of clean towels and clothes that have been washed with a fabric softener.