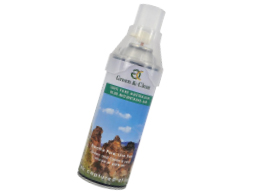 We all know air pollution in China is a major problem and the air in Australia is the nectar of the gods. Luckily, the "air farming" industry has sprung up to bottle this sweet and plentiful cocktail of life-giving gases. Australia's answer to air farming is Green and Clean, a Sydney-based company promising to help you "breathe the difference". They're spruiking these bottles of air to cashed-up tourists by telling them about the "cleansing benefits of pure clean air". They don't outright say that huffing their gas will improve your health, but they're certainly dropping some big hints.

With air "captured" from sublime locales like the Blue Mountains and Tasmania, you can "enjoy it anywhere at anytime".

So how much of this wonder tonic do you need to inhale to make a difference to your health, especially if you live in a city with high air pollution? We weren't sure, but then again, neither is Green and Clean.

Its website reads, "While there have not been any studies covering the effect on people living in polluted areas breathing small quantities of clean air, many people work on the basis that some clean air is better than none."

We're not exactly sold on the logic there, and neither are the experts. "Given that the average person breathes five to eight litres of air per minute while resting (and much more during exercise), it seems highly improbable that air in a canister could have any significant impact in diluting the adverse effects of poor ambient air quality," says Professor Guy Marks, a respiratory and environmental epidemiologist at the Woolcock Institute of Medical Research.

But even if it did, just how much would it cost to actually live on "pure" Aussie air?

We think we'll wait for the research to come in before getting out our credit cards. In the meantime, please take a deep breath as we give Green and Clean a Shonky for literally selling thin air. Product labels make all sorts of environmental claims, but can you trust them? Here's how to avoid 'greenwash'.