CHOICE trials both to help you decide if it's time to switch. 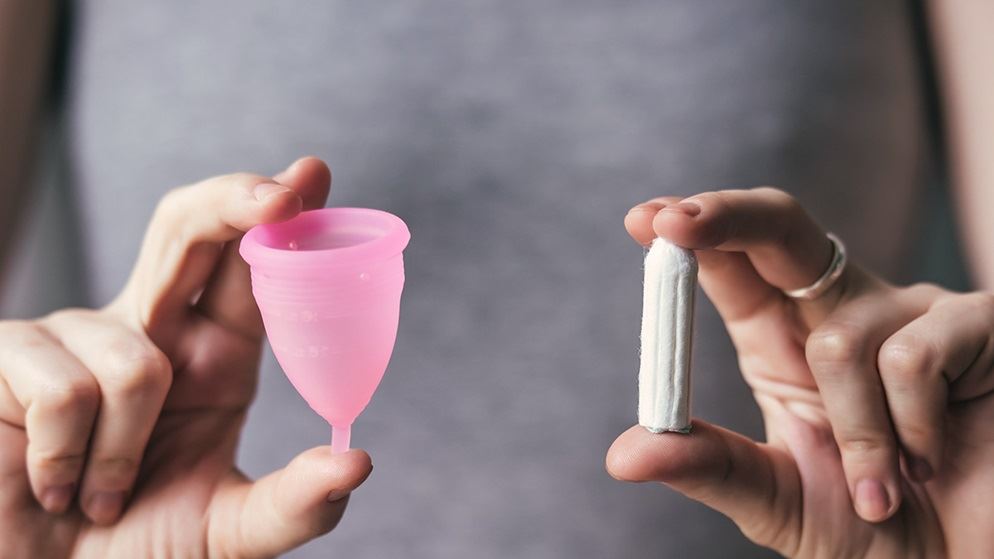 A revolution is underway in the period-hygiene market with the rise of reusable products such as menstrual cups and absorbent underwear. These products are designed to replace tampons and pads – but you won't find them alongside their more common counterparts on supermarket shelves.

CHOICE conducted a user trial of period underpants and menstrual cups to see how they stack up against their disposable counterparts in terms of reliability, comfort, convenience, cost and impact on the planet.

Period underpants are a relatively new addition to the sanitary product market and are mostly sold online. They have a moisture-wicking layer over an absorbent layer in the gusset, protected by a leak-resistant layer, and are washable.

CHOICE used Australian brand Modibodi and US brand Thinx in the trial. Modibodi and Thinx say the absorbency of their underpants ranges from half a tampon to two tampons. They can be used alone or as a backup to a menstrual cup, depending upon the flow. 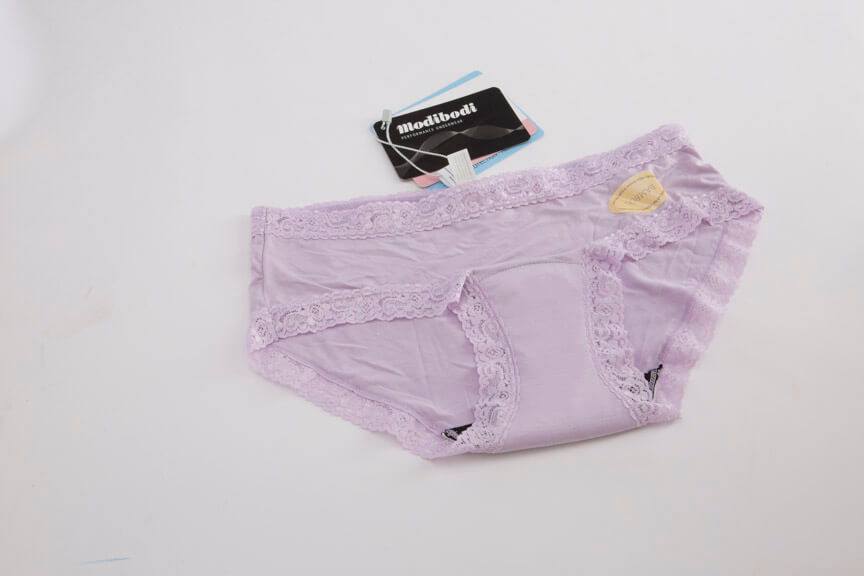 Above and below: A pair of Modibodi period underpants. These have a 'light' absorbency, equivalent to one tampon or one teaspoon of liquid, according to the manufacturer. 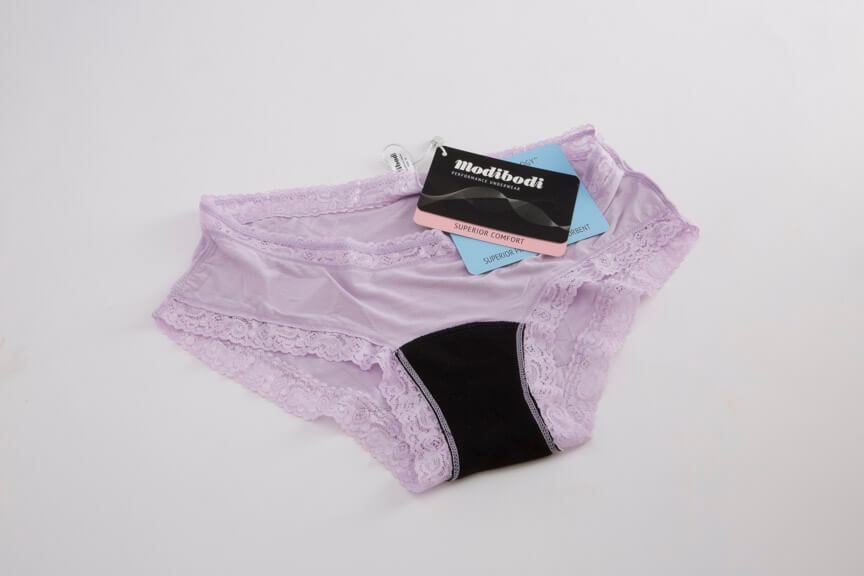 BELOW: A pair of the US-made Thinx period underwear that are meant to absorb the same amount of menstrual blood as two tampons. 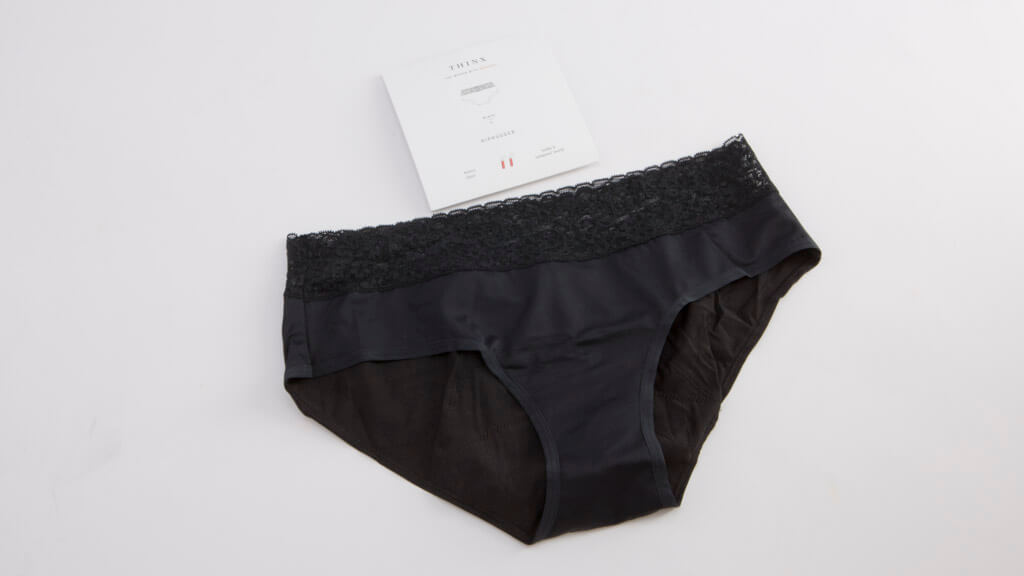 A menstrual cup is a bell-shaped device, usually made of medical-grade silicone, that is folded and inserted into the vagina to collect the menstrual flow. Once it is unfolded in place, it forms a seal that prevents blood from leaking out. When full, it is simply removed, emptied, washed and reinserted.

Menstrual cups are not new; they've been around in their current form since at least the 1980s. Most silicone menstrual cups on the market are the same shape and come in sizes that hold between 16-34 millilitres, with smaller cups recommended for younger women and girls. If inserted correctly they should perform similarly. 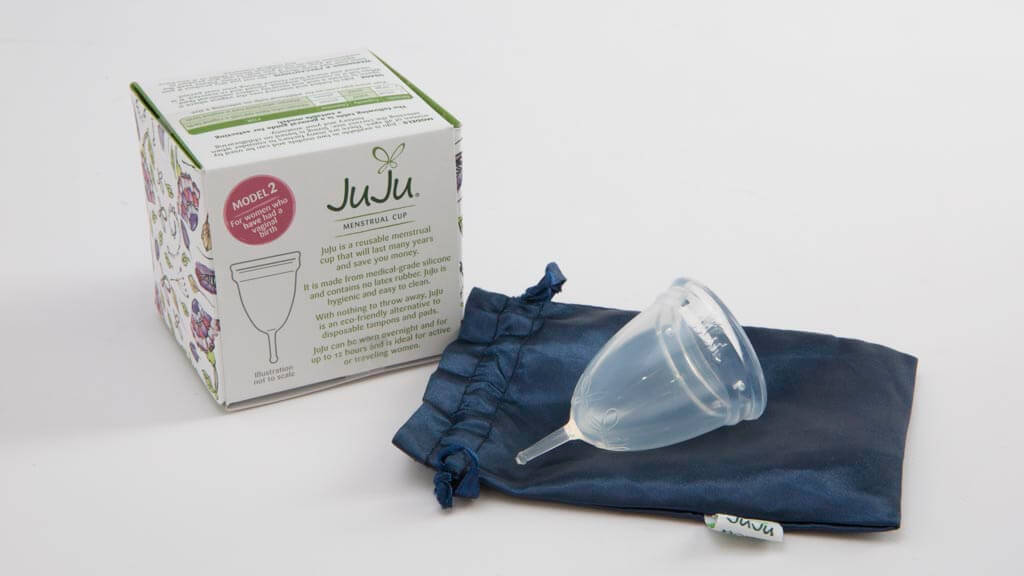 Why haven't I seen them in shops?

Menstrual cups are reusable and one can last for years. This lack of repeat purchasing may be one of the reasons that supermarkets in Australia don't stock them.

According to Brenda Tootell, director of JuJu Cups, there are only four TGA-listed brands available in Australia – Lunette, Diva Cup, JuJu and the latex Keeper. The cups can be bought in some health food stores and pharmacies, but their presence is far stronger online. Since 2018, menstrual cups no longer need to be registered with the TGA.

Five women were provided two pairs of Modibodi underwear, one pair of Thinx underwear and one JuJu Cup. They were asked to use these for two menstrual cycles, and report back to CHOICE on their experience, comparing it to using pads and tampons. They were not comparing between the underwear brands. All products were bought online.

The JuJu Cup website says it can be worn two to three times longer than a pad or tampon, or up to 12 hours, and this was the experience of all triallists on their lighter flow days.

"I almost forgot I had my period as I could just wear it all day," said one triallist.

Four out of five felt they didn't need to change the cup as often as a tampon or pad.

Heavy flow days, however, weren't quite as carefree for three out of five of the triallists, who experienced some leakage with the cup. But they also reported having previously had leakage with their usual usage of tampons.

The underpants were a mixed bag of results. One person said of the absorbent underpants: "I didn't have any leaks and they were pretty comfortable (I used them without a cup or tampon)."

Two out of five triallists experienced a small amount of leakage with the underpants and one commented: "They are great as a backup but I would never rely on them as a first line of defence!"

Combining the cup with the backup of the absorbent underpants was a popular option, with one triallist saying, "It was nice to know there was another barrier of protection."
The underpants were also embraced as a precautionary measure, with comments including, "They're good to wear if you're expecting your period" and "They were a particular success on those last few days that don't warrant a tampon."

Better sleep was a bonus with the cup and underpants. Four out of five triallists felt they didn't need to change the cup as often as a tampon or pad, and one said, "I sleep better at night… once inserted I forget about it. It's a total success."

Ease of use and comfort

All triallists enjoyed the comfort of the menstrual cups with one saying, "I could wear it all day, and tip it out during the shower at night. It feels like you're wearing nothing."

Inserting the cup took some experimentation for two of the triallists but the biggest issue was the blood when handling it, with three people saying it was messy. Three triallists also noted the absence of any odour with the cup.

Cleaning the cups involves scrubbing with soap and water and then boiling in a pot for up to five minutes.

However, three commented that if they caught some heavy flow, it wasn't very comfortable keeping them on all day, with one describing the feeling as "soggy".

Washing the underpants was straightforward but they took two days to dry, due to their absorbency, and they cannot be put in a dryer. Users shouldn't expect to wear one pair more than once in three days.

How much will they save me?

The tampons, pads and liners industry in Australia is worth $260 million dollars a year and, controversially, 10% GST is also applied on these products. An individual may spend $60 to $120 each per year on the disposable options.

A re-usable JuJu menstrual cup costs $55. Some people have reportedly used their JuJu Cups for over 10 years but Brenda Tootell from JuJu doesn't stipulate a lifespan and says it depends upon the care and cleaning of the cup.

The one-off investment in a menstrual cup was considered advantageous by all participants.

One pair of Modibodi underpants will set you back between AUS$25 and $35 and according to the manufacturer they will last up to two years. The Thinx underpants cost US$24 to $39, plus shipping.

CHOICE heard from one user (who wasn't part of the trial) that their Modibodi underpants began to fray after six months. The company says it will guarantee the quality and fabrics for up to six months.

There's no set formula as to how many pairs a person will need because it depends upon whether they are paired with other products, and how heavy the menstrual flow is. Given they can take two days to dry, you could require six pairs over three days and nights if using them alone.

For teens and tweens only just embarking on a lifetime of menstrual cycles, period underpants can offer a comfortable and confidence-building alternative to pads or tampons.

‘Knowing your cycle’ isn't easy in the early months and years and unexpected bleeding or leakage can cause anxiety, and judging by the lively conversations on this topic on social media, many mums are just as anxious for their daughters!

Modibodi offers a range of period underpants for girls. Sizes are for ages 8-10, 10-12 and 12-14 and after that they can move into the women's sizes. Currently each size has at least two styles and two levels of absorbency. Modibodi tell us the tween period underwear has been enormously popular and to meet demand they they are extending the range. They also offer period proof swimwear for teens.

Thinx do not offer a range specifically for tweens.

Menstrual cups do come in different sizes and can also be used by tweens and teens.

Are they safer than tampons?

There is no requirement for manufacturers to disclose the substances in these products. In addition, there has been little research into the health effects of substances in tampons and pads (such as deodorisers, plasticisers, fragrances, pesticide residues, dioxins). Vulval and vaginal tissue is highly absorptive and some groups fear that undisclosed toxins in tampons or pads may enter and accumulate in the body.

Prolonged use of high absorbency tampons has been associated with Toxic Shock Syndrome (TSS), a rare but potentially fatal condition caused by the toxins produced from a bacterial infection entering the bloodstream.

Approximately half of the confirmed cases of TSS are associated with tampon use.

Menstrual cups are considered by some to be a safer alternative to tampons as they are thought to be less likely to provide the kind of environment that will foster bacterial growth (as the tampon is thought to) but there has been one confirmed case in Canada of a woman developing TSS 10 days after using a menstrual cup.

The JuJu website advises washing and disinfecting the cup regularly and discarding it if it has rips, tears or changes in texture.

How bad are tampons and pads for the environment?

Menstrual cups and period underpants have minimal impact on the environment compared to tampons and sanitary pads. Four out of five of the participants reported that they were concerned about the waste and environmental impact of disposable pads and tampons.

CHOICE estimates that the average Australian woman would use approximately 10,000 disposable menstrual products in her lifetime, depending upon individual needs. The 2015 Retail World Annual Report says 469.2 million pads and 296.4 million tampons were sold last year in Australia.

The production of sanitary pads involves oil extraction, processing and production of low-density polyethylene (LDPE), with the associated CO2 emissions. Tampons don't contain plastics except in their wrapping, but involve heavy resource use through the agricultural processes of cotton cultivation, especially fertilisers, pesticides and water use.

After the impacts of production, tampons and pads must be transported and disposed of in landfill. It's been estimated that each pad will take 500-800 years to biodegrade while one source says tampons may take six months to biodegrade in landfill.

Alarmingly, research in the UK this year found that nearly half of British women flush their sanitary items down the toilet, believing this is the normal method of disposal!

Flushing tampons, their wrappers and pads down the toilet causes blockages of pipes inside private property and throughout sewage systems.

Peter Hadfield from Sydney Water told CHOICE that they remove over 500 tonnes of non-degradable material each year from the wastewater network, at an annual cost of around $8 million. Yarra Valley Water reported that its network also frequently experiences blockages in pipes which cost approximately $2.5 million in 2013/14.

The costs are not confined to the water treatment companies. “Many of our customers are reporting significant plumbing bills to remove wet wipes and other non-degradable materials from their private sewer pipes,” Hadfield said. (We've previously investigated the problems with supposedly "flushable" wipes, and even awarded Kleenex a Shonky for them.)

Below: An image supplied by Sydney Water from its sewage treatment site at Rouse Hill showing a build up of non-degradable material flushed down toilets including tampons, their wrappers and the plastic sticks from cotton buds. 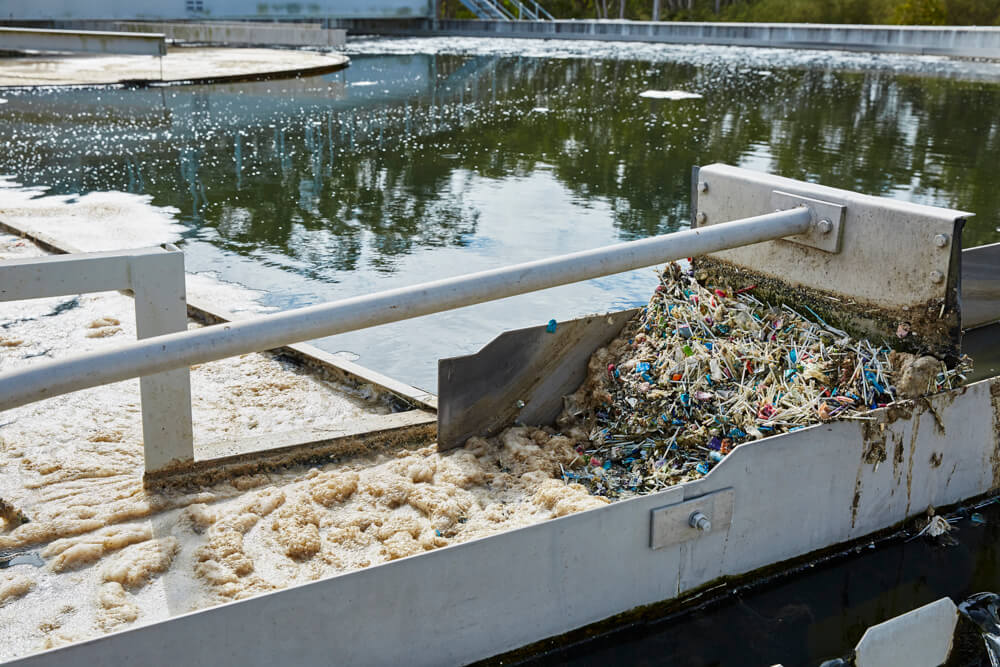 It's impossible to deny the profound environmental reasons for switching to the reusable cups and underpants. There's also a clear cost benefit over a number of years of use for the menstrual cup, but less so with the period underpants.

However, pads were not popular with our participants prior to starting the trial – they all rated their satisfaction with them as borderline to very poor. Tampons were much more popular, with four participants saying they were very good or good.

Four out of five thought they paid too much for the disposable options, and three out of five said they would switch to cups and period underpants.

The benefits of the reusable products are significant and CHOICE thinks women should be aware of all options available to them – not just those with the backing of large corporations.