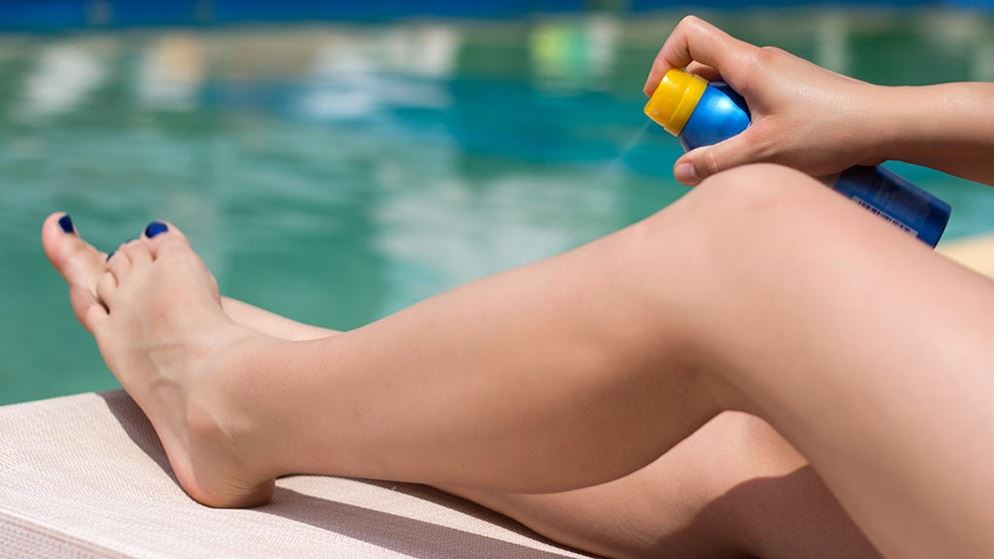 They're promoted as a fast and easy way to apply sunscreen, especially to wriggly kids and hard-to-reach places like your back. But recent news has cast doubt on spray sunscreen products. Can you trust aerosol sunscreens to provide the same safety and level of protection as creams and lotions?

Law firm Bannister Law has flagged a possible class action against Banana Boat aerosol sunscreens, after consumers complained of being burned while using the products. Independent testing of seven Banana Boat sprays found the sunscreens achieved SPF well below the stated 50+. Banana Boat stands behind its products, and says they've also had them independently tested to meet the SPF 50+ rating.

Meanwhile, the Cancer Council has stopped licensing spray sunscreen products because they're concerned people don't use them properly, and therefore won't achieve stated SPF. The main problem is that people underestimate the amount they need, giving a light spray much like they would with insect repellent.

Our own investigations have found:

So, should you reconsider using aerosol spray sunscreen?

Spray sunscreens put to the test

When we tested sunscreens in 2015, we planned to include some aerosol products. But testing them wasn't as straightforward as for creams and lotions.

Manufacturers test spray sunscreen for SPF before it's canned with propellant. Once it's canned, it's much harder to test – you have to get the product out of the can and on to the subjects' backs at a rate of 2mg per square centimetre, as per the standard. Try measuring that while you spray!

The Australian standard doesn't specify a method for testing aerosol products once they've already been canned, making it difficult to independently verify SPF claims. Various ways include spraying the product into a cup and applying the correct weight from the cup, or degassing the cans and testing the remaining sunscreen fluid.

In addition to testing the sunscreen prior to canning, the manufacturer of the spray sunscreens we planned to include had them tested afterwards as a consumer should use them – sprayed 'liberally' on the skin. Whether consumers would spray so liberally is debatable.

A protocol in the standard for testing aerosol spray sunscreens as packaged for sale would allow for improved post-market testing of these popular products.

You need to use… how much?

The average adult needs to use about 35g of sunscreen to cover their entire body, and the average spray sunscreen contains about 175g. However, this weight also includes the propellant.

To find out roughly how much of the can is sunscreen versus how much is the propellant, we did some tests and discovered only 40–60% of the can was sunscreen. So when you spray out 10g, about 4–6 grams of sunscreen actually ends up on your skin. You may lose even more to overspray, especially if it's windy or you're spraying a small area.

That means you need almost half a can of aerosol spray for one full-body application. And you still need to reapply it every two hours.

So how can you tell if you're applying enough? The spray we tested released about one gram per second – or half a gram of sunscreen per second. So to cover one limb, or the back or front of your torso, you need to spray for 10 seconds. However, different sprays release at different rates, and some have been found to be slower than this – so you may need to spray for longer.

At first glance these prices may seem comparable to sunscreen lotions and creams. But remember, only half the weight of the can is sunscreen – the rest is propellant – whereas a tube or bottle of sunscreen cream or lotion, or even a pump-spray product, is all sunscreen.

So doubling the cost per 100g of aerosol spray will give you a more realistic price  – and it may be surprisingly expensive.

The dangers of spray sunscreens made headlines with reports of people suffering serious burns when their sunscreen caught fire after it was applied. While the sunscreens contained flammable propellants which could ignite if used near an open flame, in these cases the sunscreen had been applied away from any flame. The problem was, the sunscreen was still wet on the skin, which caused it to be ignited by a barbecue flame, citronella candle or cigarette.

There are concerns about potential effects of inhaled zinc oxide and titanium dioxide, which are often found in sunscreens, often in nanoparticle form. However, there are no aerosol sunscreens with these ingredients on sale in Australia.

As for other sunscreen ingredients, the answers are less clear. Some have been found to have endocrine disrupting effects – that is, they interfere with animal hormonal systems. But because these products don't readily penetrate the skin, they're not considered a risk to humans. That might not be the case when it comes to inhalation, however there's little research to demonstrate safety or danger.

We recommend using a cream or lotion (including those in pump spray packs) rather than aerosol sunscreens.