The hidden dangers of button batteries

Button batteries can injure and kill small children, so why are they so accessible? 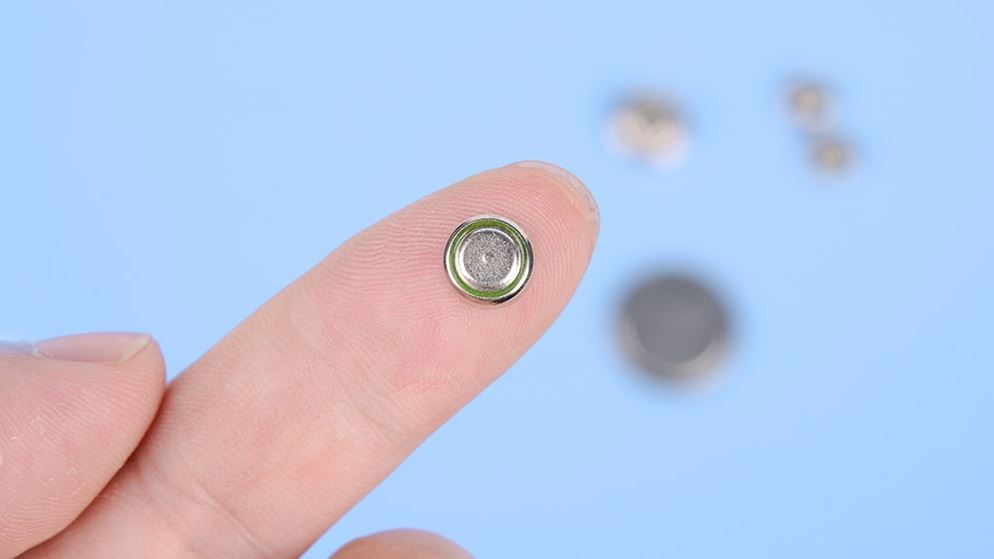 Earlier this month a two-year-old girl was seriously injured by a button battery she ingested. The battery came from a glucose meter given to her pregnant mum during a hospital antenatal appointment. The toddler has suffered significant burns to her oesophagus requiring two endoscopic investigations and tube feeding. The full extent of her injury is still not known.

The problems with button batteries

A button battery is smaller than a 10-cent piece, but the physical damage it can cause can be fatal. There are a number of elements that make button or disc batteries a particular safety problem compared to other batteries:

Once the battery starts to burn, the symptoms can range from feeling ill and grizzly to having a mild cough – which can all be easily written off by parents or medical personnel as something else. Summer Steer, who died after swallowing a button battery in 2013, was mistakenly diagnosed with giardia.

Paediatric emergency doctor and Director of the Queensland Injury Surveillance Unit (QISU), Dr Ruth Barker says, "These injuries cast long shadows, they are caustic injuries. Burn scar tissue doesn't stretch or grow and has to be treated regularly under anaesthetic."

To keep your child safe from the danger they pose, follow these safety tips:

Twenty kids a week is twenty too many

In Australia, two children have died from button battery-related injuries. And it's been estimated by Product Safety Australia that 20 children a week are presenting at emergency departments nationwide for the removal or treatment of a swallowed or inserted button battery.

Queensland Health has funded a national surveillance program to collect data on the nature of severe button battery related injuries. In the first nine months of the Australian Paediatric Surveillance Unit reporting, 11 cases of severe injury have been identified; eight involving injury to the oesophagus. Many of these children have spent weeks in hospital.

Currently, only toys designed for children under three years of age are required by law to have secured battery compartments. This means that many everyday household items that contain button batteries – including car keys, baby thermometers and remotes – have no mandatory safety standards.

That's why we're calling on the government to act and introduce mandatory safety standards covering all items containing button batteries, including that:

Kidsafe Queensland CEO Susan Teerds says the proliferation of products containing button batteries is alarming: "They are everywhere now. Even if you don't think you have any in your home there's a good chance you're mistaken."

We deserve to have trust in the things we buy.  Join our campaign for stronger product safety laws.

When these batteries become stuck in body tissue the electrical charge they put out causes heat which can burn the stomach, oesophagus, bowel or even a nostril in less than two hours. This charge exists even in batteries that seem flat, so while it may not have enough power to run your device any longer, it can still cause catastrophic damage inside a child.

Oesophageal injuries are more likely with larger, lithium batteries (that are good at holding charge) and smaller children (usually toddlers). But any button battery can cause injury.

While the news of a young child dying from swallowing a button battery is devastating, those who survive come out far from unscathed, as the resulting physical damage is often severe and long term. Paediatric emergency doctor and Director of the Queensland Injury Surveillance Unit (QISU), Dr Ruth Barker says, "These injuries cast long shadows, they are caustic injuries. Burn scar tissue doesn't stretch or grow and has to be treated regularly under anaesthetic."

Hunter, a one-year-old boy, swallowed a lithium battery, which burnt a large hole in his oesophagus and trachea leaving him unable to swallow his own saliva. As a result he has endured 10 operations so far to try to repair the damage. Many children can't swallow or eat for years afterwards, and it can be life-changing. "While they are lucky to survive, life won't be the same," says Barker. (See Sarah's story below to find out how one victim is coping three decades on.) 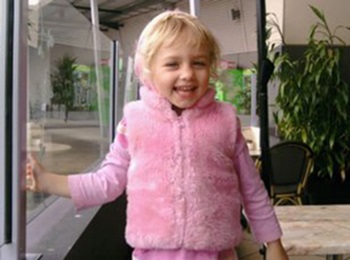 In 2013, four-year-old Summer Steer was effectively a walking time bomb when she swallowed a button battery without anyone noticing.

It was only when Summer's mother noticed that her little girl was producing dark-coloured stools that she took her to a doctor, who diagnosed her with giardia.

Summer was still playing, eating and drinking for the majority of the fortnight after she swallowed the battery, but eventually the little girl started vomiting blood. In hospital, she was wrongly diagnosed with a bloody nose and sent home. After two more hospital visits Summer's condition deteriorated severely, and it was only when she was fitted with an oxygen tube in hospital using an X-ray that an object was discovered lodged in her throat. Despite the discovery, medical professionals decided the object would be removed once she was flown to Brisbane from Noosa. In Brisbane she was rushed into surgery, where it was discovered that the object was a lithium battery. She died shortly after.

An inquiry was held after Summer's death, and despite investigations it was never clear where the battery she swallowed had come from.

Susan Teerds says, "Even if you don't have kids these things are everybody's problem. If you don't lock them down and dispose of them properly, you are part of the problem."

In 1985, Patricia Preston's baby daughter Sarah swallowed a 'flat' lithium button battery she found in a box in the camera shop her mum was working in. The battery went down easily, and Patricia was none the wiser.

Preston says later that day the nine-month-old had an unusual cry and seemed a bit off. She called the local hospital and was told Sarah would be fine. Unconvinced, the next day she made the 80km trip to hospital, where she was told that the baby had croup.

Preston stayed up all night with her baby, who by this time had started passing dark stools "like squid ink". Panicked, she headed to her mum's home in Sydney. 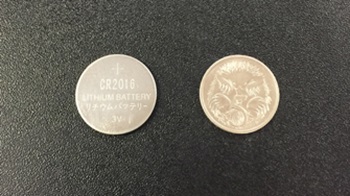 Preston's mother (who was a nurse) took Sarah to Westmead Children's Hospital, where she was again diagnosed with croup and made to wait for six hours. She was eventually X-rayed, but the foreign object found in her throat was mistaken for a coin. After a long wait she was taken into surgery, and it was then that the surgeons discovered the 'coin' was in fact a button battery.

The battery had burned a hole in Sarah's trachea and she suffered a lung collapse. As a result of her injuries she was unable to eat and was fed through a tube in her stomach for two years. Now aged 31, Preston says Sarah still has problems swallowing, and suffered developmental delays after extended time in hospital.

While Preston says she was lucky she found doctors who were prepared to investigate her baby's problem, she finds it hard to comprehend that what she and Sarah went through is still an issue 31 years later.

"Here we are all these years later and I see so many parallels between what happened with me and Sarah, and [what happened to] Summer Steer."

In July 2016 the ACCC released the voluntary Industry Code for Consumer Goods that Contain Button Batteries. The code has been developed by a range of businesses with support from the ACCC and state regulators as well as input from importers, manufacturers, wholesalers and retailers, industry associations, testing and standards and regulatory affairs organisations.
The Code stipulates a number of safety mechanisms, including:

Retailers are also encouraged to consider the height at which they display button batteries for sale, to ensure they can't be reached by young children. In addition, industry responsible for manufacturing button batteries have been encouraged to supply product in child resistant packaging and with appropriate labelling.

Information must be available at point of sale (including online) indicating that the product (or any included peripheral device) requires button batteries to operate and that these are hazardous to young children.

Despite this initiative, the code is voluntary and regulators have resisted calls for mandatory requirements for button battery safety.

"While many companies haven't done anything, some companies have complied by sealing the battery compartment with a simple screw. But for poorly made products, the battery can still be released if the product is dropped or the screw can pull out easily. For example, a young boy was severely injured when he swallowed a battery from an artificial tealight with a screw closure that was given to his sibling at kindy and dropped at home." says Dr Barker.

Toys for children under 36 months, under mandatory regulations, are required to have secure battery compartments and pass impact/ drop testing. Other items marketed with disclaimers such as ‘this is not a toy’ don't need to pass this test but can be attractive and sometimes fatal in the hands of a toddler.

As Dr Barker points out, this rule is shortsighted, as young children still live in houses that contain household products, and often have older siblings who own gadgets that contain unsecured batteries. "What concerns me the most, are items listed as novelties. You often find labelling that says 'this is not a toy', but it's so clearly aimed at kids – how can they get away that?"

Dr Barker says many Australians would be shocked that so many products in the Australian market have not been tested to any safety standard. "Too many preventable injuries have been caused by products that are badly designed." She wants a general safety provision added to the ACL (due for review later this year), which would require companies to ensure that the products they sell are safe.

CHOICE campaigns advisor Sarah Agar says there are surprising gaps in Australia's consumer law. "While the Australian Consumer Law provides strong protections for consumers who experience problems with products, there is no general requirement under the law that products sold be safe. This is startling – most people would assume that our law requires goods to be safe before they are sold."

She says button batteries are a perfect example of this oversight. "While there are rules requiring that button batteries in toys (for children under 36 months) be properly secured and inaccessible to children, these rules do not apply to other products."

Agar says that the current system of rules is complicated, and it's leading to injuries and deaths. "A simpler option would be to amend the law to require that all products sold be safe."

What makes lithium button batteries particularly dangerous is that even when they are 'flat' and can no longer power your device, they still contain enough charge to burn if they're ingested. As a result, careful disposal is critical, and that doesn't mean your bin is a safe place either.

There are some recycling facilities available for lithium and alkaline batteries and this is the safest place for them to go. For more information on how and where to dispose of your button batteries head to batteryrecycling.org.au.

And if recycling sounds too hard, Teerds has some harsh reminders for anyone who is in possession of a button battery. "This is everyone's problem, we have children dying and being injured. If you don't have a child you might think 'this doesn't affect me', but if you throw it out of the window of your car, or don't dispose of it safely then it could end up in the hands of a child anyway. You wouldn't do that with a loaded gun, so why would you do it with one of these batteries?"