Is the insurance industry missing the mark when it comes to mental health risks? 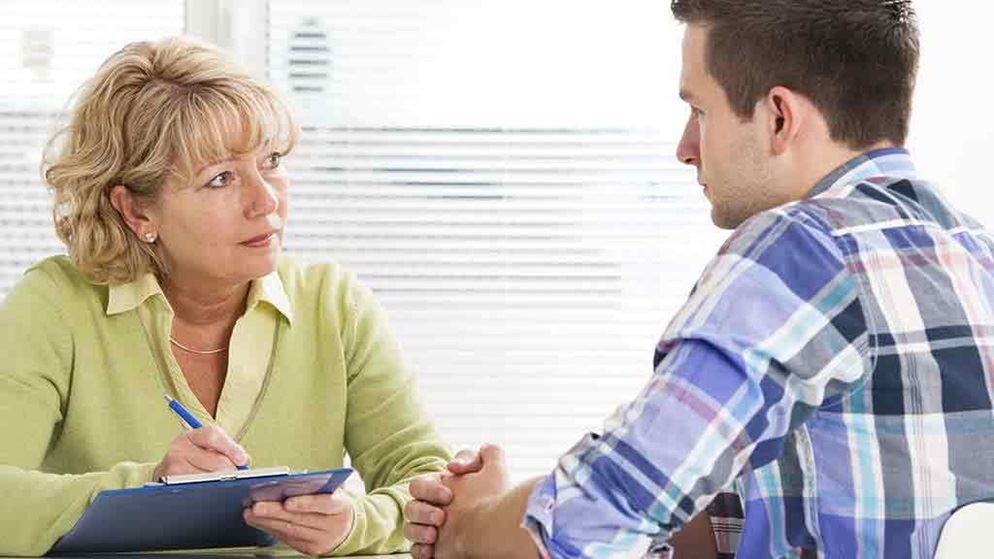 CHOICE investigates the longstanding issue of discrimination by the insurance industry towards consumers who've experienced some form of mental illness, from depression and anxiety to everyday work stress. If you've received counselling or medication, you may be unknowingly placed into a high-risk category for certain insurance products.

Insurance companies don't seem to know how to deal with the complexities of mental health, so they tend to assign a high level of risk to people with mental illness without taking individual circumstances into account.

For the one in two Australians who'll face a mental health issue at some point in their lives, the indiscriminate approach can mean the denial of cover, higher premiums or rejected claims, even if the illness has passed or is under control.

This longstanding problem has been well documented, most notably in a large-scale project by the Mental Health Council of Australia (since renamed Mental Health Australia) and beyondblue.

Their 2011 report, Mental Health, Discrimination and Insurance: A Survey of Consumer Experiences, found many people who've experienced mental illness have a hard time qualifying for cover and lodging successful claims, particularly when it comes to income protection and life insurance:

The research also revealed that customer service reps can handle the matter insensitively during the application process, asking questions such as "are you currently suicidal or do you have plans to commit suicide within the next 12 months?" The report concluded that the insurance industry as a whole relies on "broad and often stigmatised assumptions" about mental illness.

Recognition that the insurance industry should take a more nuanced approach to assessing mental illness risks dates back to at least 1993, when the Australian Human Rights Commission undertook the first National Inquiry into the Human Rights of People Living with Mental Illness.

The resulting Burdekin report found that the insurance industry "remains unjustifiably cautious – to the point of discrimination – in its assessments of risk in this area", despite improvements in mental health treatments.

Mental Health Australia (MHA) and beyondblue have lobbied for change for more than a decade without getting much traction. "Since beyondblue started talks with the insurance industry in 2002, no significant progress has been made," CEO Kate Carnell told CHOICE.

What the insurers say

People who work in the insurance industry tell a different story about what happens during the application process. According to LifeShield insurance broker Carolyn Wright, applicants who mount a strong argument that the illness is under control stand a better chance of avoiding a mental health exclusion or higher premiums.

"We had a client who was contemplating suicide 10 years ago and recently had a temporary relapse, but he still got full cover income protection with no mental health exclusion," she says. And Wright maintains that income protection insurers take people's circumstances into account when assessing risk. 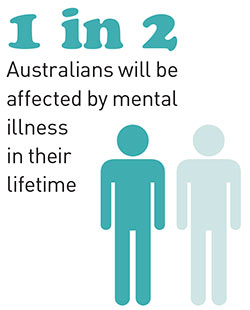 "One of the most critical things they look at is whether you've recently missed any days of work due to a mental health issue, or if you're currently off work. They won't cover you in these cases, because there's too much risk for the insurer.

You might also be denied cover if you're at the start of treatment and showing signs of not being able to control the issue, such as changing medications frequently."

In Wright's view, the underwriting and assessment process "is very fair and reasonable as long as the case is presented correctly and a true and complete picture is painted".

A spokesperson for the insurer TAL also told us applicants are assessed individually.

"The factors considered in the underwriting process include the severity and nature of the illness, the number of episodes, the duration of those episodes, the amount of time off work, and how long it's been since the episode occurred. The applicant's rates may remain standard, they may be excluded for mental health conditions, or they may be declined an application."

The industry is clearly concerned about controlling costs related to mental health claims. In a recent interview with a financial industry publication, TAL CEO Jim Minto said total and permanent disability (TPD) claims related to mental illness are a prime cause of rising insurance costs and that the industry "has loosened up the definitions and the coverage too much".

And according to what we've heard from mental health advocates – including a recent documentation of case studies provided by the MHCA – insurers regularly knock back applicants who haven't missed any work due to mental illness but may have received mental health support at some time in their lives.

In some cases, a single medical visit for common ailments including stress, insomnia, short-term depression or mild anxiety can be enough for insurers to deny cover or reject a claim, even if the incident occurred more than a decade ago or is ongoing but well managed.

Both the MHCA and beyondblue point to a widespread lack of consistency in the way insurers – including different representatives of the same company – define mental illness.

The organisations say they've been contacted by many consumers who say their individual circumstances were not taken into account and that terms such as mental illness "episode" are defined differently.

Australian anti-discrimination law allows insurance companies to deny cover to people with disabilities, including mental illness, if the discrimination is reasonable and based on actuarial or statistical data that shows a special degree of risk. But they can also discriminate on the basis of "other relevant factors", including commercial judgement or an applicant's particular circumstances.

The MHCA and beyondblue argue that, even with this legal leeway, the insurance industry may still be breaching anti-discrimination laws because its behaviour reflects a fundamental misunderstanding of mental illness.

Both organisations say their numerous requests to the industry for statistical and actuarial data relating to mental illness have gone unheeded, leading them to conclude that discriminatory behaviour may not be based on reasonable assumptions. 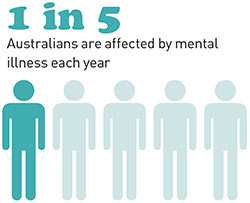 According to its terms of reference, the Financial Ombudsman Service (FOS) will consider complaints about companies that refuse to provide general insurance (which includes travel and income protection) or impose special restrictions on customers, but only after the customer has tried and failed to resolve the complaint through the company's own dispute process.

An FOS spokesperson explained that the service "has limited jurisdiction in relation to people not being able to get insurance cover, and we don't capture data on people who have been refused coverage".

In any case, people who have experienced mental illness are increasingly turning to FOS to help them resolve financial services disputes.

In 2011-12, there were 444 "special assistance" requests (which may have involved insurance as well as other financial services disputes), 26% of which were mental illness related. In 2012-13, there were 530 such requests, 49% of which had to do with mental illness. "We've had quite an increase across the board," FOS told us.

In cases where customers haven't told an insurer about a pre-existing mental health condition, an FOS complaint is not likely to result in a win. Under the Insurance Contracts Act's "duty to disclose", applicants are required to reveal everything that may affect the insurer's decision to accept the risk of providing cover.

In a July 2013 decision, FOS ruled in favour of a travel insurance provider that denied a claim because the applicant failed to disclose a history of depression, even though the duty to disclose was buried in the fine print of the product disclosure statement (PDS).

The MHCA and beyondblue are urging consumers who believe they've been discriminated against because of a mental health issue to obtain free legal advice through the Public Interest Advocacy Centre (PIAC), as well as visiting the beyondblue website and filling out a "tell us your story" form.

Industry super fund REST, in partnership with its insurer AIA, is one of a number of funds that appear to be taking steps to improve services to members with mental health issues – including special training for call centre staff, according to REST CEO Paul Sayer. "People who've had mental health issues have come in to talk about it, and we've taken the input on board," Sayer told us.

The initiative came about in response to staff not having the skills to appropriately deal with callers in distress, including people in a suicidal state, asking whether their families would receive a payout.

REST and AIA are part of the SuperFriend project, a collection of industry super funds and group insurers aimed at improving mental health in the workplace, including making sure workers with mental health issues have enough insurance.

A related project, SuperMIND, is aimed at better organising claims data in order to develop a "more detailed understanding of the rate, type and reporting of mental illness-related insurance claims". 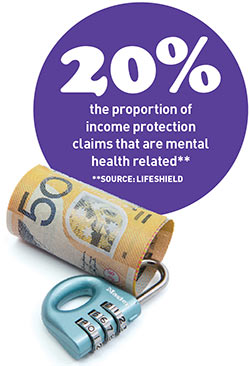 AIA published a report in August 2013 that said group insurers pay out more than $160m a year in mental illness-related income protection and TPD claims.

Sayer says REST and other SuperFriend members are making a concerted effort to better understand the complexities of mental health for the benefit of both employees and employers.

"The area that we're paying for in insurance claims is generally around rehab, so we look at how to support people to get them back to work. We're a mutual, so we're here to support our members, not find ways to deny claims."

And the financial services sector has taken other tentative steps forward. In September last year, for instance, the Financial Services Council introduced a new standard, calling for member life insurance providers and their reps to undertake mental health awareness education and training.

Wright, who has specialised in finding cover for people who've experienced mental illness, says consumers should be careful when relying on insurance inside industry super.

"Automatic cover at a minimum level is included, but you should check the fine print. Consumers may be unaware of what they're getting."

Wright maintains that because commission rates are generally the same across the industry, "brokers wouldn't have any financial reason to recommend one product over another". However, retail insurance is generally more expensive than insurance provided by super funds, and you can always talk to your fund manager about increasing or changing your cover.

Providing cover is one thing; paying claims is another. The MHCA and beyondblue say they've heard from many travel insurance customers who've seen their claims rejected because the insurer categorised symptoms such as stress, insomnia and fatigue as individual mental health conditions.

*Cover-more requires documentation and approval of a mental health assessment and will then only waive a mental health exclusion at its discretion if a higher premium is paid.