Can certain foods cause cancer?

Some people say just about everything gives you cancer, but what does the research say? 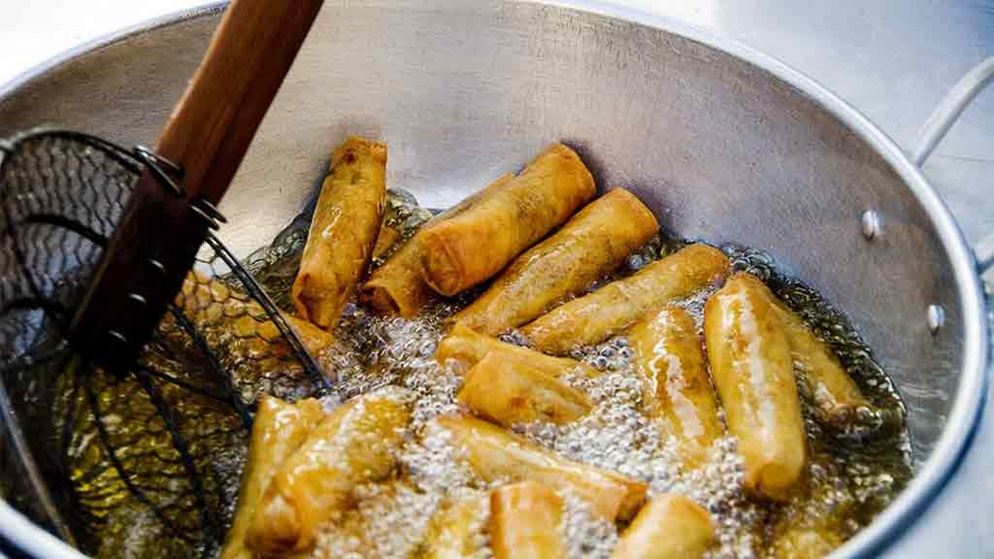 The dish on carcinogens

We're all aware that certain diets can lead to wider waistlines, but did you know some foods have been found to increase the risk of cancer? About one-third of cancers are estimated to be caused by diet, body weight and physical inactivity – all modifiable lifestyle choices.

Keeping a healthy body weight and exercising regularly are pretty straightforward ways to reduce your cancer risk, but it can be hard to keep track of the latest advice on what to eat, especially when contradictory information floods the media from one week to the next.

Some foods can reduce your risk of developing cancer, while others blur the line by causing cancer under certain conditions and preventing it in others. In this article we'll take you through what's known to increase the risk of cancer, what's known to reduce the risk and those tricky foods in between.

Foods that may increase your risk of cancer

Frying, toasting and baking some starchy foods to the point where they go dark brown can cause the formation of acrylamides, which have been found to cause cancer in animals – though not humans as yet. The International Agency for Research on Cancer (IARC), which is part of the World Health Organization (WHO), lists acrylamide as a class 2A carcinogen. This means it's probably carcinogenic to humans, but is not confirmed to be (see WHO's research into cancer).

The main culprits are potato chips and other fried and baked forms of potatoes, as well as toast, biscuits and even coffee. When you cook these foods, keeping them light brown rather than dark or burnt can reduce acrylamide formation.

It's widely believed that sugar feeds cancer, so proponents argue that eliminating all refined sugars – and other sources of sugar and carbohydrates such as bread, pasta, fruit and sweet drinks – can prevent or halt the progression of cancer.

The thing is, all cells (including cancer cells) use sugar for energy. But if they don't get it from food, they get it from breaking down protein and fat, so starving yourself of carbs won't help stop cancer. If anything it can make matters worse, as cancer sufferers need excellent nutrition to counteract the effects of treatment. Depriving yourself of entire food groups such as carbohydrates is counterproductive.

Nonetheless, that doesn't mean a lot of sugar is okay. Emerging research suggests that excess insulin – which occurs with fast, high peaks of glucose in the bloodstream – can drive the growth of cancer cells. Too much sugar can also lead to obesity, which is a risk factor for cancer. So it makes sense to eat low GI foods and to avoid the sugar peaks associated with excess insulin.

Artificial sweeteners, which had been shown to cause cancer in animals at extremely high doses, are considered safe for humans.

Experts from the World Cancer Research Fund recommend limiting red meat to less than 500 grams per week and avoiding processed meats and seeking fresh alternatives if possible. They also recommend that children should not be given processed meats at all.

In recognising the potential cardiovascular benefits of small amounts, however, authorities recommend limiting alcohol to less than one drink per day for women and two for men. That is, of course, depending on who you speak to (see the red wine paradox).

Salt and salted foods damage the lining of the stomach, and high-salt diets are linked with stomach cancer.

Foods that may decrease your risk of cancer

Some foods are blamed for causing as well as preventing cancer – so apparently you're damned if you do eat them and damned if you don't! Confusing, right? Here's what the research says about these borderline foods.

The IARC has classified coffee as a 2B carcinogen for the bladder, but if you need a little caffeine kick to get moving in the morning, don't throw away your coffee cup just yet. Ongoing epidemiological research has found only a weak link between coffee and cancer, and it may be due to other lifestyle habits such as smoking, which may be more prevalent among coffee drinkers.

A recent meta-analysis of epidemiological evidence found coffee, which contains antioxidants, shows signs of being protective against colorectal and other cancers, with growing evidence it protects against skin cancer as well.

Soy contains phytoestrogens – plant chemicals that have a weak hormonal effect on the body. It's been suggested that soy may increase the risk of hormonally related cancers such as breast cancer and prostate cancer. But research suggests it may in fact decrease the risk of prostate cancer, due to its inhibiting effect on the testosterone-induced growth of the prostate. Soy's effect on breast cancer is less clear – although it appears to be protective, women with oestrogen-dependent breast cancers are recommended to limit soy foods and avoid soy isoflavone supplements.

There is good evidence that milk protects against colorectal cancer, but conversely, diets high in calcium (from milk, cheese and non-dairy sources) have been linked with prostate cancer. However, you'd need to consume more than 2000mg of calcium per day to increase your risk of prostate cancer – that's the equivalent of drinking about 1.5L of milk every day, which is up to twice the recommended daily intake.

Other studies have found no link between prostate cancer and calcium, with one recent large US study finding high calcium intake reduced prostate cancer in black men, but not white men.

Chilli contains high levels of capsaicin, which has been shown to slow the growth of tumours. At the same time, rates of stomach cancer are higher among populations where chillies are consumed in large amounts. This could be because chilli can be used to disguise spoilt food, so data may be confounded by Helicobacter pylori infection (a kind of bacteria which causes stomach ulcers and cancer), lack of refrigeration or other health impacts caused by socioeconomic status.

Researchers and their PR teams regularly pump out good news stories about the cardiovascular and cancer-fighting benefits of red wine. The skin and seeds of red grapes are rich in antioxidants including resveratrol and catechins, and the alcohol helps release them into the wine. But for every good story there's an equally bad one, trumpeting warnings about red wine and its cancer-causing capabilities.

Although this might be good for the continuation of research grants, it's enough to make us poor punters turn to drink!

Some people maintain that eating acidic foods or foods that otherwise make the body more acidic enhance cancer cell growth and should be avoided in favour of 'alkalising' foods. In reality, the body's acid-base balance is tightly regulated by the respiratory system and kidneys, and is virtually impossible to change – and even a slight change in pH can be life-threatening.

WHO's research into cancer

IARC's role as part of the World Health Organisation is to conduct and coordinate research into carcinogens and cancer. The agency regularly reviews evidence from animal and human studies to categorise the carcinogenic potential of products and processes to humans into one of five categories:

Class 3: Not classifiable as to carcinogenicity in humans.

Class 4: Probably not carcinogenic to humans.

In addition to the food and drink products already mentioned on these pages, the IARC lists the following food-related products and processes as potential carcinogens: Cantonese-style salted fish (Class 1), emissions from high temperature (>230C) frying (2A); and Asian-style pickled vegetables (Class 2B).

Food, Nutrition, Physical Activity, and the Prevention of Cancer: A global perspective is a comprehensive review of the clinical research and epidemiological studies on lifestyle factors related to cancer compiled by the World Cancer Research Fund and the American Institute for Cancer Research.

Cancer Council Australia is a national non-government cancer control organisation with the aim of facilitating prevention, research, support, and care.