Myopia on the rise in children

Our indoor lifestyle is being blamed for increased short-sightedness around the world. 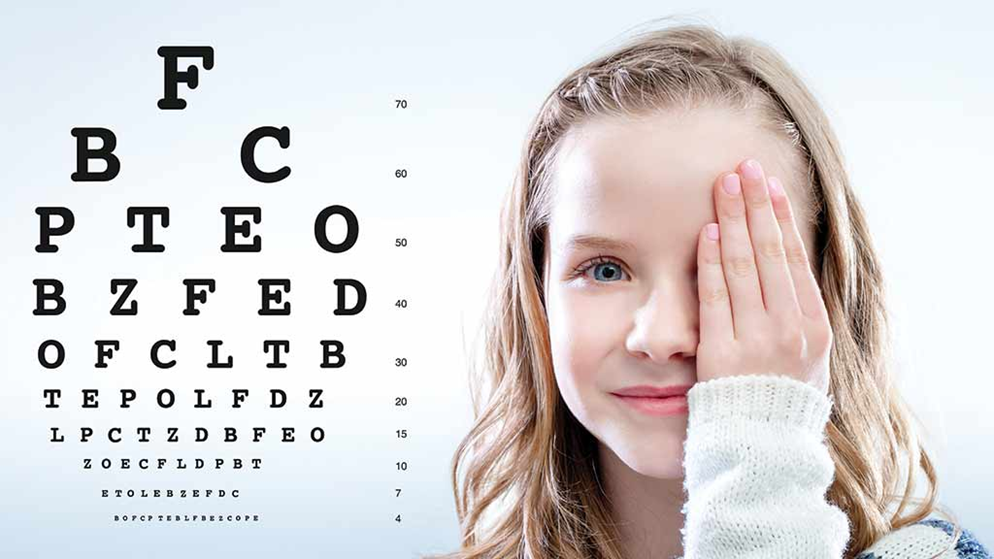 Is kids' eyesight getting worse?

Myopia boom, myopia epidemic – call it what you like, but we're currently in the midst of a rapid increase in myopia, or short-sightedness, and it's got eye health professionals very concerned. At this rate, they reckon, about half the world's population will have myopia by 2050.

But while it's true that the vision can be corrected, it doesn't solve the cause of the problem, which relates to how the eyeball grows. People with myopia have an elongated eyeball – the back of the eye doesn't stop growing when it should. This extra growth stretches and thins the inner parts of the eye, including the retina. This can lead to more serious problems in later adulthood, including detached retina, cataracts, glaucoma and even blindness.

Much of the increase in myopia is a form called juvenile myopia, which develops in school-age children. The younger you are when it starts, the worse it can finally get. High myopia is when the focus error is stronger than -5.00 diopters, and objects beyond 20cm in front of you are blurry.

In Australia it's estimated that about one-third of school leavers have myopia, and about three or four percent have high myopia. It's the people with high myopia who are more likely to suffer serious eye health problems later in life.

What's behind the increase in myopia?

In Australia the rate of myopia has more than doubled since the 1970s. In parts of Asia, however, it has increased much more rapidly, and is now as high as 95% in some cities – and about 20% have high myopia. About half those are expected to suffer major vision loss in older age.

There's a familial tendency to myopia, but genetics doesn't explain the rapid increase in myopia over one or two generations. Having ruled out genetic changes as a cause for myopia, investigators looked to environment and lifestyle changes.

Lots of close-up work – reading, sewing, studying, and especially in recent years the use of handheld devices – is often blamed for increased risk of myopia, but in fact its role is only small.

Large-scale population studies, backed by laboratory studies, have found that the most significant factor in the rapid increase in myopia is time spent indoors during childhood when the eye is developing. Kids are spending more time indoors for various reasons – and yes, it does include watching TV, playing computer games and time with phones and tablets rather than playing outside.

In places where the increase in myopia is most pronounced – such as large cities in China, South Korea, Japan, Taiwan and Singapore – there is little outdoor play space, there's a cultural emphasis on the importance of education and studying, and sometimes high pollution levels force people to stay indoors. Myopia rates in rural areas in these countries, where kids spend more time outdoors, are nowhere near as high.

The link between the outdoors and protection against myopia was investigated closer to home. A research team based in Western Australia looked at the relationship between the amount of time spent outside and the presence and level of myopia among adults in Perth and Norfolk Island, while a Sydney team investigated the relationship in children. In these studies, they found the more time spent outdoors, the lower the incidence of myopia.

Further research has been conducted to find out what it is about being outside that prevents myopia. Dr Regan Ashby from the University of Canberra has investigated the role of light intensity in preventing myopia. He explains that once light meets a certain intensity – which is measured in lux – a chemical called dopamine is released within the eye, and stops the elongation at the back of the eye.

The light level for some benefit is estimated to be 10,000 lux, with at least 40,000 lux required for optimal benefit. A bright sunny day can be over 100,000 lux and as high as 300,000 lux, while indoor lighting is typically only around 300–500 lux. There's enough light even on cloudy days, and wearing sunglasses on a sunny day allows more than enough light into the eye, while also preventing UV damage.

Preventing or slowing the progression of myopia

While glasses and contact lenses may be inconvenient, ophthalmologists and other eye health professionals are mainly concerned with long-term, irreversible impairment that comes with high myopia. Even laser eye surgery doesn't fix the problem – it only reduces the need for glasses or contact lenses by altering the lens of the eye, not by correcting the elongation at the back of the eye.

By preventing myopia in the first place, or at least slowing down its progression, they aim to limit the severity of myopia throughout childhood and adolescence, till the progression slows or stops naturally in young adulthood – without reaching the level of high myopia.

For the best outcomes, it's important to address vision problems as early as possible. Experts recommend children get their eyes tested before they're three years old, and then again before they start school. Regular testing every two years can help catch problems early, but if your child complains of sore eyes, headaches or difficulty seeing the black/white board in class, get them tested as soon as possible. Tests can be arranged through your local optometrist, and are covered by Medicare.

Associate Professor James Elder, an ophthalmologist at the Royal Children's Hospital in Melbourne, says it's important for children to spend at least a couple of hours each day outside, arguing it's cheap and effective and should be the first line of prevention.

Researchers have found that simply exposing children to time outside in natural daylight can reduce the incidence of myopia. In one study, researchers in Guangzhou, China, had 6 and 7-year-old kids at some schools spend an extra 40 minutes per day outside, while at other schools there was no increase in outside time. After three years, the rate of myopia in kids spending more time outside was reduced by around 25%. In Taiwan, another study had kids spend an extra 80 minutes per day outside, and the risk of myopia reduced by around 50%.

"So far, exposure to daylight has been shown to prevent the development of myopia, not slow progression. It is likely that it does slow progression, but studies so far weren't designed to test this," explains Professor Kathryn Rose, from the School of Health at the University of Technology, Sydney.

"Observations from studies suggest you need about 10 to 15 hours a week outdoors – that is, about 2 to 3 hours per day outside school time," she says.

When going outside isn't a possibility, researchers are looking at alternatives, such as high intensity light boxes which are used for treating seasonal affective disorder (low mood caused by short days and low light in winter).

Low-concentration atropine drops have been used successfully to treat children who have early stages of myopia. You may have experienced atropine drops at an eye examination: they relax the lens and make the pupils dilate, making it easier to look at the back of your eye, and it provides a more accurate measure of refraction error. However, there are side effects including blurry vision, increased sensitivity to light and stinging.

Doctors have found that administering atropine at 0.01% concentration, instead of the 1% typically used in examinations, can slow or even halt eye growth and myopia. Unfortunately these drops aren't commercially available in Australia, but patients under an ophthalmologist's care can get them from a compounding pharmacist for a cost of about $40 per month. While research is ongoing to find the optimal duration of treatment, typically it would be for two years in the first instance.

There's a variety of different spectacles and contact lenses used to treat myopia. These work differently to glasses or contact lenses that simply correct the focus error, in that they attempt to modify the structure of the eye, in particular the elongated shape causing the myopia.

Unfortunately many of these products haven't been widely studied, with very few clinical trials – which themselves are relatively small, and not very long term – so it's difficult to draw conclusions about how effective they are.

One of the better studied options is orthokeratology lenses (also known as Ortho K lenses). These rigid contact lenses induce changes to the shape of the cornea (the clear outer surface of the eye), temporarily correcting short-sightedness. The lenses are worn at night, and the corrective effect of the reshaped cornea means the user may not have to wear glasses during the day. The cornea gradually changes back to its normal shape over the course of the day.

Long-term studies are needed to determine whether the effect is maintained or if vision rebounds, quickly catching up to what it would have been without the lenses. They can be used for adults, teens and children, and cost about $1500–$2000 (including consultations), and can last up to two years.

Interested in correcting your vision? See our guide to laser eye surgery or the prescription glasses buying guide.

Devices and computers and other eye problems

Even if increased use of computers and mobile devices isn't responsible for the myopia boom, they can still cause eye problems, particularly eye strain. Because we tend to use them close to our face and for long periods of time without a break – we even blink less – eyes can become tired and dry. Experts recommend the so-called 20/20/20 protocol: every 20 minutes, look into the distance for 20 seconds and then blink 20 times.

The screens give off a lot of blue light, and while it's a mere fraction of blue light levels outdoors, this can cause problems when used at night – it prevents the release of the hormone melatonin, making it more difficult to fall asleep.

Some glasses have blue light filters added to reduce the blue light when using screens. A cheaper alternative may be orange-tinted glasses – you can buy these as fit-overs if you already wear glasses. Finally, there are also settings on computer screens and devices which claim to reduce blue light emissions.

Who's who in eye care?

The main eye health professionals you'll come across in Australia are ophthalmologists, optometrists and orthoptists.

Ophthalmologists are medical specialists who undergo at least 12 years' training, including a general medical degree and five years of specialist training. Found in hospitals and private practice, they can diagnose and treat eye disorders and disorders of the visual system, prescribing medicines and conducting surgery when necessary. You need a referral from a GP or optometrist to see an ophthalmologist.

Optometrists undergo five years of university training and can examine eyes, give advice on vision problems and prescribe and fit glasses and contact lenses. If they find evidence of eye disease, they will refer the patient to a specialist.

Orthoptists often work alongside ophthalmologists, and have four years of university training in vision screening and clinical assessment of vision and eye movement problems and eye disease. They're often involved in the pre-school vision screening program, and if you see an ophthalmologist, they may do some of the investigations and provide pre- and post-operative care.