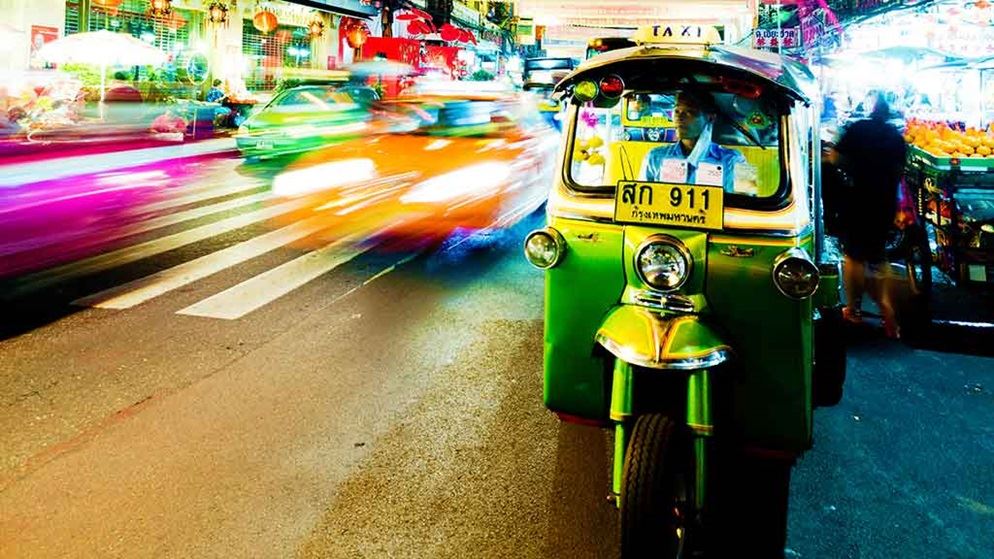 Should you book directly with the airline or through a comparison site? See our tips on booking cheap flights.

Most Australian tourists won't need a visa to enter Thailand if they're visiting for less than 30 days. Passing through immigration and customs should be straightforward, but will depend on queues and whether or not officials take an interest in you or your luggage.

Airport taxes are included in the cost of your ticket and no longer have to be paid in cash.

VAT refunds for eligible goods (but not services) can be claimed at the airport upon departure. Read more about how to claim a VAT refund in Thailand.

Scam alert: If your taxi driver tells you your hotel is "closed" and offers to take you somewhere else, or if they stop at a travel agency to "confirm your booking", you're probably about to get a hard sell on a tour or an alternative hotel. Stand your ground and never feel obligated to buy something you don't want.

Key destinations and how to reach them

Buses connect all major towns, cities, airports and tourist areas in Thailand. Most are cheap and clean, and some are air conditioned. For a higher price, 'VIP' buses offer extra comfort and an on-board toilet for long-distance trips.

Trains connect much of Thailand, from Bangkok to Chiang Mai in the north, Hat Yai in the south, and on to Malaysia and Singapore.

Ferries and boats serve popular tourist islands such as Koh Phi Phi, Koh Samui and Koh Phangan. They also connect some coastal mainland towns, such as Phuket and Krabi.

Tip: Many domestic flights, particularly with budget airlines, depart from Bangkok's Don Muang Airport (DMK) which is about 45km from the main airport, Suvarnabhumi (BKK). Transport between airports can take between 45 minutes and two hours, depending on traffic.

Getting around towns and cities

Tip: Taxis are generally metered whereas tuk-tuk drivers will want to negotiate a price.

Tip: Book with a well-known international car hire company. They're likely to be easier to deal with if you get into a dispute.

Motorcycle and scooter hire is easy to find on the street in tourist areas. Most vendors are local small businesses and they may not check your licence (you'll need an international motorcycle licence), offer you a helmet (it's the law) or any kind of insurance (if you crash, you will probably have to pay for damages).

Warning: Foreigners have been arrested and detained by Thai police until they agree to pay compensation to locals for motorcycle or jet-ski crashes (or, in the case of scams, for damage they didn't even cause).

Thailand's roads are the most dangerous on earth according to a report by World Atlas, with an average of 36.2 road deaths per 100,000 citizens. If you're planning on driving, make sure you have the appropriate skills, licence and insurance.

Accommodation ranges from beach shacks to five-star resorts and health spas. Prices may not be quite as low as in neighbouring Laos and Vietnam, but by Australian standards you can certainly grab a bargain holiday in Thailand.

Most hotels, resorts and hostels are easily booked online through local or international sites (better to go with a well-known international one, in case of disputes).

Tip: Compare booking sites and the hotel's website (if it has one) to find the lowest price, and check reviews before you book.

Tours can be organised through a travel agent or online through a major tour operator before you go. But if you're only interested in short trips or day trips, you'll have more choice and probably find better deals once you're in the country.

If you prefer everything to be organised for you, consider a package deal from a travel agent, which includes flights, transport, accommodation and sometimes even meals.

Got a travel tip about Thailand? Or spotted something in our guide that needs updating? Add a comment below.