Here's where to send all that festive frippery after Santa and the relatives have gone. 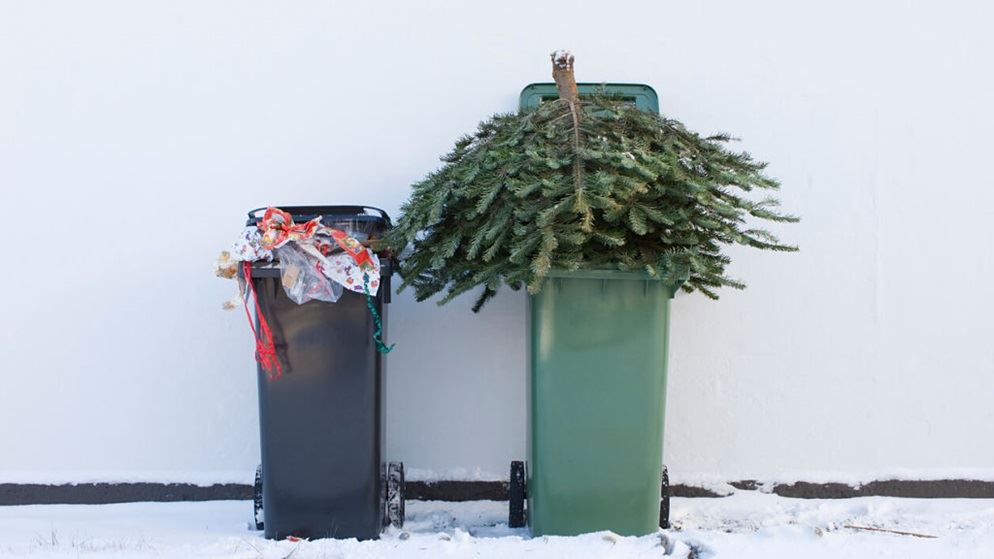 'Tis the season to make waste

Among other more heartfelt things, Christmas is a time for creating thousands of tonnes of waste. Reams of shiny decorations will be purchased, millions of trees will be bought and adorned, most meals will be over-catered, wrapping will be abundant, and millions of both cherished and unwanted gifts will be handed over.

We talked to the recycling wizards at Planet Ark and got the scoop on what can and can’t be recycled, to help direct a larger proportion of these resources back into the economy and away from landfill.

The naughty list: nine things that can't be recycled

These can't go in the recycling bin because they're electronic, and the fact that they're long and string/rope-like means they get caught in the conveyer belts of the recycling stations.

There used to be a network of collection points for corks which were turned into things like insulation, flooring and cricket balls. Unfortunately, as the price of cork dropped with the introduction of screw tops, it became unviable to recycle corks.

In almost all councils areas these are not recyclable because they don't melt in the recycling process at the same temperature as bottle and jar glass, causing lumps in the molten material. They're a major contaminant and should be disposed of in the landfill bin.

Some councils around Perth, as well as in Lismore and Ballina in NSW, do take these in kerbside recycling, because they use the glass and crockery as an additive to road base.

Despite the amount of these that will be used over the holiday period, they're not recyclable.

"The plates are probably too flat and may well be picked up as paper," says Brad Gray from Planet Ark. "And plastic cutlery is entirely the wrong shape to be sorted by the recycling machines. So they need to go in the garbage (landfill) bin where they will take centuries to break down."

Tinsel isn't recyclable as it can cause significant issues in the recycling stations – it gets wrapped around the conveyer belts and other machinery. Tinsel should be reused every year. If tinsel is not reusable it should go to landfill. Look for alternative biodegradable or recyclable decorations.

While paper wrapping paper is recyclable almost everywhere, the foil and/or plastic wrapping 'paper' is not recyclable. It ends up in the paper recycling collection where it interferes with the recycling process.

Plastic Christmas trees are reusable, but unfortunately when they're too old or broken, they have to go to landfill.

These can't be recycled because they may be contaminated with food, but even if they're unused, by the time the paper's been reincarnated as a napkin or tissue, the fibres are too short to be used again.

Those deflating air mattresses that you suffered through during last year's camping trip, or had the relatives sleeping on, are most likely not recyclable. They'll go straight to landfill.

The nice list: nine things that CAN be recycled

These, along with aluminium foil, will be accepted almost everywhere. Just make sure they're rolled into a 3D or ball shape. If aluminium is flat the paper sorting fans in the recycling station will pick it up and send it to the paper collection area.

2. Cardboard and paper wrapping with lots of sticky tape

These are fine to recycle – the sticky tape is removed using screens during the pulping process.

Real trees can be mulched and the material used for gardens etc. Brad Gray, from Planet Ark, says."Generally speaking, a Christmas tree is too big for most kerbside garden collections which usually only allow branches up to a certain size. In the City of Sydney, for example, branches or trunks need to be smaller than 10cm in diameter."

Check with your council if it has special Christmas tree collections, or they can be dropped at waste transfer stations.

The cups are rigid plastic and are 3D in shape, which means they'll be picked up and sorted into the plastic recycling area.

Well, sometimes. These plastics are used for packaging things like toys, scissors and batteries. Gray says it's not clear if these are always recyclable, but if they're of a similar shape to food and drink packaging they will likely be collected in the mixed plastics.

"The real issue will be if they're too large or a particularly odd shape," Gray says. "The kerbside system has been designed to sort common household packaging."

6. Plastic and other toys, books

Donate them to charity, or give them away via Freecycle.org.

50 million tyres are discarded in Australia each year. If you're getting new tyres before you head off on a summer road trip, make sure the old ones go to a commercial recycling facility. Look up a tyre recycler near you, or make sure your retailer recycles.

8 and 9. Prawn heads and ham bones

Our kitchen appliance test coordinator, Fiona Mair, recommends you 'upcycle' your leftover ham bone and discarded prawn heads (separately) into rich stocks to make delicious dishes later on. But you don't have to do it straight away – store them in the freezer until you can face going back into the kitchen!

How to make stock from prawn heads:

How to make ham stock

Add the bone to a large pot of water with roughly chopped onion, carrots, celery and peppercorns, and simmer for at least one hour (the longer the better). Freeze or use in any soup with beans, lentils or other pulses - e.g. baked beans or white bean soup. Leftover meat can be added to soups, or to cabbage cooked in the ham stock.