Can alternative sweeteners reduce your reliance on the sweet stuff? 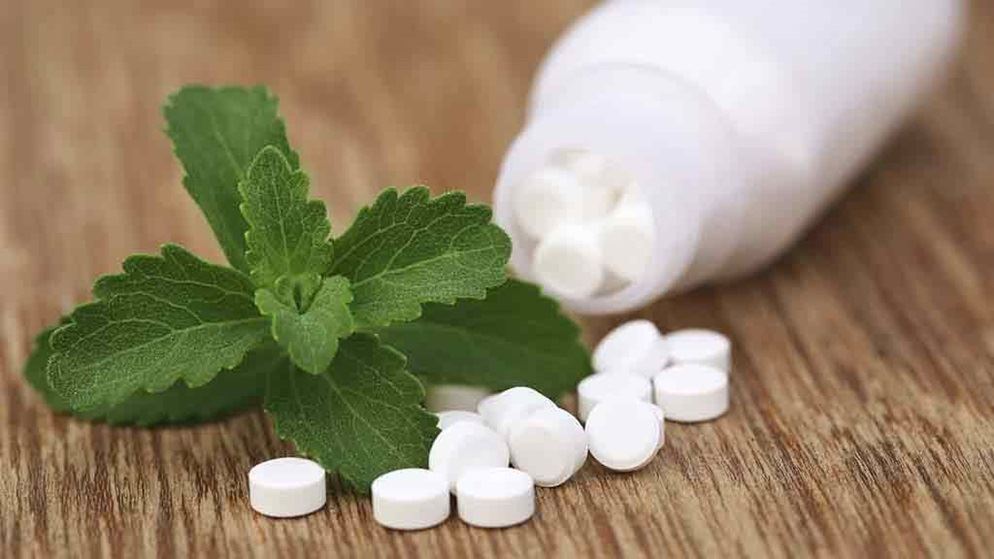 Artificial sweeteners seem like an easy way to have your cake without looking like you've eaten it too. But sweeteners have a problematic history, and the science is still out on whether they cause certain negative health effects. (Spoiler alert: experts are pretty certain they don't cause cancer.)

How much sugar is OK?

The World Health Organization (WHO) recommends that free sugars (known as 'added sugars' in Australia) make up less than 10% of your total energy intake. For an average adult consuming 8700kJ per day, that's about 51g, or 13 teaspoons. Children have lower energy requirements, so should eat less than this.

Australians have trouble sticking to these recommendations. The average Aussie consumes 60g of sugar each day – around 14 teaspoons. Teenage boys have the highest intake, averaging 22 teaspoons per day, with some eating a whopping 38 teaspoons.

Most sugar comes from energy-dense, nutrient-poor 'discretionary' foods and drinks – aka 'sometimes foods'. Aside from crowding nutritious foods out of our diets, sugar is linked to a range of potential negative health outcomes: weight gain, dental cavities, type 2 diabetes and possibly even depression.

Since just over half our added sugar intake comes from drinks, reducing our consumption of these is a good place to start.

"The reason for starting with drinks is that the body doesn't register any fullness (satiety) from drinks that contain sugar, so people don't eat less of something else when they consume them. For comparison, if you eat an extra slice of bread, you're likely to eat a little less of something else," says nutrition expert Dr Rosemary Stanton.

Controversy and hoaxes and bias, oh my!

On the surface, sweeteners seem like a great option: the same sweet taste for a fraction of the calories. What's not to love? Unfortunately, it's a little more complicated than that.

Cancer and artificial sweeteners – what does the research say?

Since the first artificial sweetener, saccharin, was discovered in 1879, artificial sweeteners have been dogged by controversy. Aspartame in particular has been the subject of many studies, a conspiracy theory or two, and a particularly pervasive hoax. (Google 'Nancy Markle' if you're up for an interesting read.) It's been accused of causing a range of health effects, ranging from headaches and dizziness to cancer and multiple sclerosis.

While some studies have linked artificial sweeteners and cancer, many more studies have found them to be safe. Aspartame, for example, is one of the most exhaustively studied sweeteners, with more than 100 studies supporting its safety. Several studies claiming links with negative health effects have since been found to have significant flaws. However, negative press is difficult to shake, and artificial sweeteners have developed a bad name in some circles.

The dose makes the poison

From there, regulators set the acceptable daily intake (ADI) levels: the estimated maximum a person can safely consume every single day for an entire lifetime without appreciable risks to health. ADIs are about 100 times less than the smallest amount that might cause health concerns, and even people with the highest daily sweetener consumption generally don't hit the ADI.

In Australia, the ADI for aspartame is 40mg per kilogram of body weight per day. A 375mL can of diet soft drink contains around 200mg aspartame, so a 75kg adult would need to drink almost 15 cans or 5.6L per day to exceed the ADI – a fairly unlikely scenario.

Battle of the bulge

"We found that inside the brain's reward centres, sweet sensation is integrated with energy content. When sweetness versus energy is out of balance for a period of time, the brain recalibrates and increases total calories consumed," says Associate Professor Greg Neely from the University of Sydney, an author of a 2016 study that found sucralose significantly increased fruit flies' calorie intake from other sources.

It's hard to say. One recent review found that people who regularly consume sweeteners (both stevia and artificial sweeteners) have a higher risk of weight gain, obesity, type 2 diabetes and cardiovascular events, while another review found that switching to low-calorie sweeteners results in modest weight loss and may help people manage their weight.

To make things even more confusing, a recent study found that Australians consume less sugar than 20 years ago, but obesity rates are rising. Could artificial sweeteners play a role? It looks like even the scientists can't agree on this one.

If you're tempted to get all science-y on artificial sweeteners and do your own digging, take what you read with a grain of salt. Part of the reason scientists can't agree may have to do with who's paying their bills.

"Reviews funded by artificial sweetener companies are about 17 times more likely to have results reporting that artificial sweetener use is associated with lower weight, or weight loss," says Professor Lisa Bero from the University of Sydney, who co-authored a 2016 paper on research bias.

Research funded by competing industries (such as the sugar industry, which has a vested interest in people not using artificial sweeteners) is likely to draw unfavourable conclusions about artificial sweeteners, so you even need to be wary of research that's anti-sweetener.

Food Standards Australia New Zealand (FSANZ), the Australian food regulator, rigorously examines raw data from safety studies before approving anything for use. It also considers other research and consults government agencies and the public. FSANZ keeps an eye on what its international counterparts are doing, and says it will amend the ADI if new information comes to light.

Diet Coke a pain in the arm

"I switched from drinking Coke to Diet Coke when weight gain became an issue and spent about 20 years drinking more and more Diet Coke per day until I was consuming over four litres of the stuff daily. My initial weight loss reversed and I got fatter and fatter over the years," says CHOICE member Kim. She does admit to being an overeater, but says this tendency has increased over time – which could be a cause of the weight gain or possibly the result of so much artificial sweetener, or a combination of both.

When Kim took a two-week break from Diet Coke, the chronic nausea she'd experienced for years disappeared. It returned as soon as she took up the habit again, so she cut back to four cans a day.

"At that point I noticed the chronic bursitis in my shoulder/upper arm went away, a result which even steroid injections had failed to achieve," she says.

"Since then my tolerance for Diet Coke has dwindled to the point where even a single glass of the stuff triggers a return of the bursitis. I am presuming the aspartame is the cause of these symptoms, but it's just a guess based on literature promoting the belief that this stuff is toxic."

How to spot artificial sweeteners

If you're not sold on artificial sweeteners, the best way to avoid them is by studying the ingredients list. Generally, anything labelled 'diet', 'sugar-free' or 'low-calorie' probably contains a non-sugar sweetener.

The most commonly used artificial sweeteners in Australia

Alternatives to sugar and artificial sweeteners

Examples include sugar alcohols such as xylitol (additive number 967), sorbitol (420), mannitol (421) and erythritol (968). They're difficult to digest, so impact blood sugar less than normal sugar, but eating too much can cause flatulence and diarrhoea. They don't react with oral bacteria to form plaque and cavities, so they're more tooth-friendly than sugar.

'Natural' sweeteners such as stevia and monk fruit (luo han guo) are gaining ground, likely in response to suspicion of 'artificial' sweeteners. Stevia is 250–300 times sweeter than sugar, but doesn't have negative effects on blood sugar levels, and may even help control them.

But even though they come from natural sources, they're still potentially problematic – and often aren't as natural as they appear. "Stevia is added to food as purified steviol glycosides – so it's not entirely 'natural'," says Dr Stanton.

Associate Professor Neely says he wouldn't be surprised if 'natural' sweeteners have similar affects on appetite as artificial sweeteners. Sweetness signals that an energy hit is on the way; when that energy doesn't arrive, we seek out those 'missing' kilojoules elsewhere. "It doesn't matter if a plant made it accidentally or if a factory made it on purpose," he says – a sweetener is a sweetener.

While sugar replacements reduce kilojoules, they don't actually address people's preferences for sweet foods. "I consider one of the major reasons for not going from sugar to artificial sweeteners is that they will continue to feed the desire for sweet tastes," says Dr Stanton.

"One example that I often use is when people stop taking sugar in their tea (or coffee), they lose the liking for sweet tea (or coffee). Indeed, if you give someone a cup of sweetened tea when they no longer take sugar, they usually dislike the taste so much that they can't drink it. However, if they had instead switched to artificial sweetener, their liking for sweet tea would not have abated in this way."

Tips to curb your sweet addiction

If you reduce your need for sweetness, you reduce your intake of both sugar and artificial sweeteners. It's boring advice, especially compared with fads that promise fast results, but the best approach is to stick to whole foods, as unprocessed as possible, and have everything in moderation.

Try a two-pronged approach: replace sugary foods and drinks with unsweetened substitutes, and slowly cut down on the amount of sugar you use.

Other things to remember

"It seems like the safest route is definitely don't have lots of sugar. That's not good. You also don't want litres of Diet Coke. That's not good either," says Associate Professor Neely.

"I mean, I'll still have an artificially sweetened beverage sometimes. It's just that there are some people who drink three litres a day. My feeling is moderation is fine. But extreme consumption of either is not good."

"They're not really looking at all these more in-depth metabolic readouts in this situation. Our work supports that we need to look into it more. The jury's still out, really."