Is frozen yoghurt really good for you? 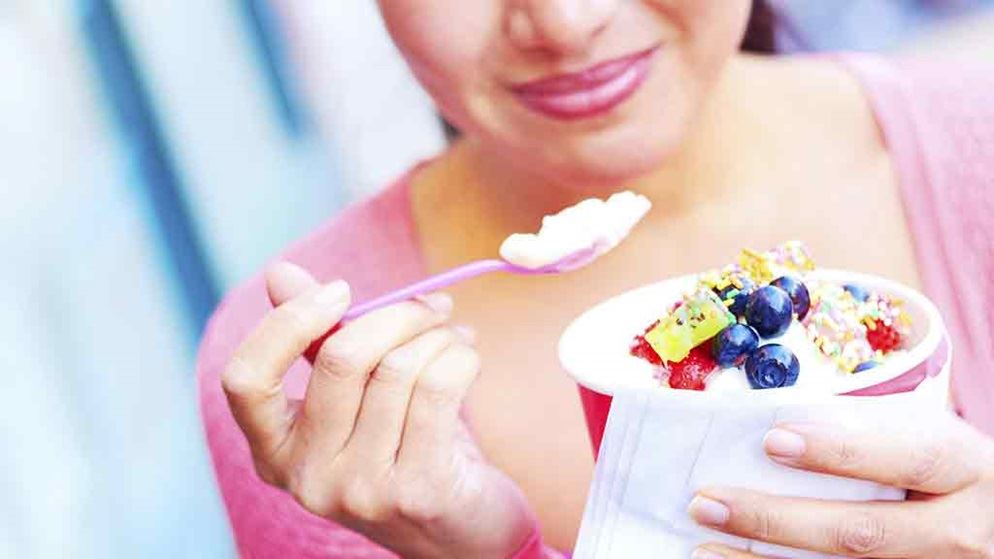 Yoghurt has a reputation for being a healthy food choice, but what about its cooler cousin? Frozen yoghurt – or froyo, as it's commonly called – is a hot item in the supermarket freezer section. But is it anything more than just a tasty ice cream alternative?

To distinguish their products from other chilly treats such as gelato, froyo shops often market them as a low-fat, low-kilojoule, high-calcium healthy treat. They boast of their fresh fruit toppings, beneficial active cultures, antioxidant-rich goji or acai berries, and even omega-3.

But how true are these health claims? It's difficult for consumers to know, because the nutrition information in many shops is non-existent or incomplete, as we discovered when we visited five froyo shops in Sydney – Mooberry, WowCow, Yogurberry, Yogurtland and Zwirl.

What's in your froyo?

Not only is it hard to determine the basics, such as fat and sugar levels, it's impossible to know how many active cultures and which strains, or how much omega-3 is in the food. One chain we contacted, Noggi, couldn't even tell us which of its products contain omega-3, despite laying claim to this health benefit on one of its stores' websites.

According to Food Standards Australia New Zealand (FSANZ), takeaway shops selling unpackaged food should be able to provide nutrition information on request, and if a nutrition or health claim is made about the food, a nutrition label should be available.

Who labels their froyo?

Of the five shops we visited, only two displayed very basic nutrition information:

Some chains display nutrition information on their websites for their yoghurt flavours, and a couple also provide information about their toppings. But they only show information per 100g, which isn't much help when you're in the store, faced with a variety of cups which are not labelled by weight and which can range from 90g to 500ml.

We also found some questionable nutrition information on offer. Noggi's analysis claims 100g of strawberries provides 1kJ of energy, when in fact it's closer to 100kJ.

While some yoghurt stores make claims we can't verify due to lack of nutrition data, Yogurberry goes one step further, with some frankly wacky health claims.

In-store posters say the yoghurt contains "vast quantities of bifidus lactobacillus" [sic] that is not only "excellent for your digestion" but can also "aid weight loss and significantly lower the risk of coronary heart disease".

Yogurberry's in-store pamphlet claims "calcium is known to have slimming effects" and that "live yoghurt cultures... can slow the ageing process of the body".

New laws that take effect from January 2016 will regulate health claims on labels or in ads. In the meantime, a transitional standard prohibits claims that a food is slimming or has intrinsic weight-reducing properties, and must not refer to the prevention, diagnosis, cure or alleviation of a disease.

As a result of CHOICE's enquiries, Yogurberry's claims are being investigated by NSW Food Standards.

Is it really yoghurt?

The only frozen yoghurt company we found with a complete ingredients list was WowCow - which does contain milk and cultures, with added sugar. While we can't establish the formula used by other companies, we suspect it would be similar.

"I consider it a huge stretch of the imagination to call this list of ingredients real yoghurt," says nutritionist Dr Rosemary Stanton. 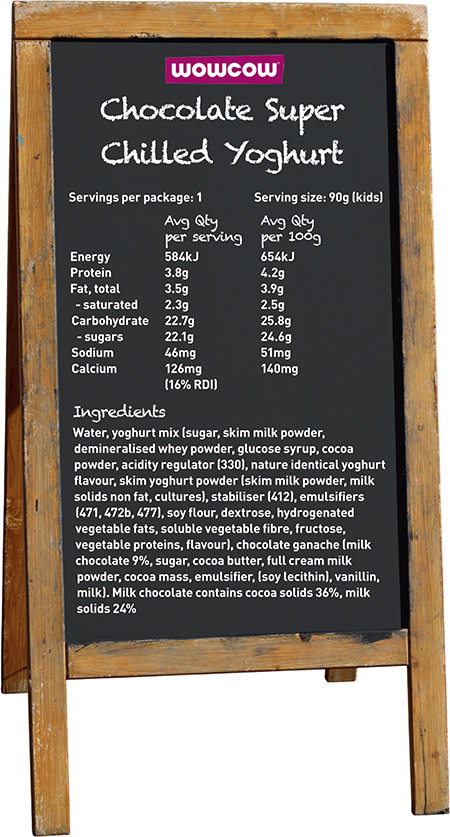 "I'd call them milk-based desserts," says Stanton. "They have about half the calcium content of regular yoghurt and 1.5 times the kilojoule count, with all that added sugar."

She also suggests that despite claims of active cultures by some outlets, product testing is needed before claiming that probiotic bacteria are present.

In terms of kilojoules, plain frozen yoghurt is not too hefty – it's the serving size and the toppings that are the real killers. At Noggi, the original flavour in a regular cup (210g) will give you a kilojoule hit of about 1300kJ. But if you add a tablespoon-sized scoop each of toppings such as almonds, Tim Tams and Coco Pops, you'll be slurping down around 2849kJ.

The real problem comes with the self-serve shops, where heavy-handed serving can mean a serious kilojoule blow-out. In two of the self-serve shops we visited, Yogurtland and Yogurberry, only a huge 500mL size cup was available. If you half-filled it with Yogurtland's Arctic Vanilla you'd be looking at around 880kJ – and that's before loading up on toppings.

Not only is your waistline at risk, your budget could blow out too. Some frozen yoghurt outlets set prices by cup size, plus optional add-ons at 60c or 70c per topping. However, the self-serve outlets we visited charge by weight, and the unclear pricing information could easily confuse the unwary shopper.

The friendly attendant in Yogurtland told us the price was 59c per fluid ounce, when he could have told us the metric equivalent ($20.81 per kilogram).

On our two visits to Yogurberry, which charges $25/kg, the receipt showed the weight had been rounded up by 5g. In one case, the scales read 325g and the receipt showed 330g. This rounding-up added 12c to the total price. When asked, the staff acknowledged that the weight was automatically rounded up. But you'll only know this if you ask for your receipt.

We understand this problem has been spotted in other Yogurberry franchises; they claim the rounding-up is a way of reclaiming the cost of the container. However, the National Measurement Institute confirms that this is in breach of regulations, as customers must be informed of any extra charges.

We also found that at both self-serve shops we visited, the yoghurt nozzles pour huge dollops very quickly into the cup – making it hard to control the flow and the amount you end up with. One 12-year-old we spoke to was charged $20.80 for one cup on her first visit!

Frozen yoghurt may sound healthy, but in large amounts and smothered in sugary treats, it's a dessert. If you're looking to limit kilojoule (not to mention financial) overload, choose a shop that has a variety of cup sizes (some stores start at 90g), pick a small size, and stick to fresh fruit toppings.

In NSW, food outlets with more than 20 stores statewide (or 50 stores nationally) are required to display the average kilojoule content of each product alongside the price. This covers fast food chains, snack chains, juice bars, and coffee shops – anywhere that sells "standard food items" across their stores.

In March 2013, these rules were extended to cover the same types of standard foods in supermarkets such as bakery items and BBQ chickens. Mandatory schemes also operate in SA and the ACT.

The yoghurt stores we looked at have fewer than 20 stores, so they're exempt from mandatory kilojoule labelling. However, in NSW, where a store chooses to voluntarily display nutrition information, it should comply with the regulations that apply to bigger chains, displaying kilojoules and price for each product.

CHOICE, which has been part of this initiative in NSW, believes it's important that all consumers have the information they need to make healthy choices. We're calling for a nationally consistent kilojoule-labelling system for takeaway food.