Are packaged babies' snacks from the supermarket as healthy and full of goodness as they seem? We navigate the labels and claims to see how nutritious they really are. 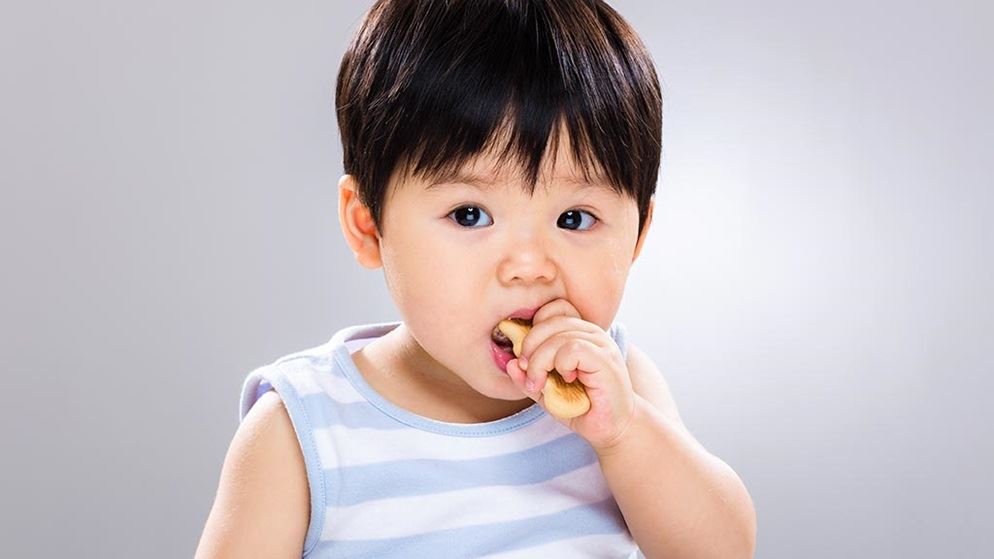 Packaged snacks are perennially popular with both kids and adults alike, as shown by the heaving shelves in the supermarket snack aisles. But the growing range of biscuits, cereal bars, crisps, rice cakes and fruit snacks on the shelf right next to baby formula and baby food suggests that food companies have found a new target market.

Some of these snacks are being marketed as suitable for babies as young as six months, and on the surface most appear to be healthy and full of goodness – as you'd hope for children this young. But are they?

Many of these snacks may be a better option for your baby than mainstream biscuits, cereal bars or chips. But overall our experts weren't impressed with the offerings, and here's why.

Considering these snacks are targeted at babies and toddlers, some are more sugary than you might expect.

Breakey points out that products that claim to be suitable for infants (babies under 12 months) can be a better choice, as food laws limit how much sodium they contain and require that they be labelled as 'sweetened' if they contain more than 4% added sugars and honey. However, there’s no such requirement for products targeted at older babies – and either way there's no limit to how much sugar they contain.

"Young children do not require excessively sweet foods and promoting consumption of these foods will only encourage a taste for sweet foods and can be hazardous for young teeth," says Ryan.

If you want to avoid giving your baby foods with added sugars, it's not as simple as looking for the word 'sugar' on the ingredients list. More than 30% of the products we looked at contain added sugar in the form of fruit juice concentrate, which sounds a whole lot better on the label, and many companies use this to their advantage.

"Naturally sweetened with fruit ingredients" claims the packaging of Heinz Little Kids Fruit & Chia Shredz, but the product is 35% apple juice concentrate – and a small 18g serve contains the equivalent of more than three teaspoons of sugar. Little Bellies Mini Gingerbread Men are "sweetened only with grape juice", but grape juice concentrate – aka sugar – makes up 29% of the product.

The ACCC announced in June that it was taking action against Heinz over the nutritional claims made on its Little Kids Shredz products. It's alleging that Heinz is being misleading by representing these sugary products as healthy and nutritious food for children.

The overwhelming majority of snack products purport to be a source of fruit or veggies, whether it be in the product name, a claim on the label or both. But don't expect them to make any real contribution to the half a standard serve of fruit and two to three serves of vegetables it's recommended that one- to two-year-old babies eat each day.

Baby Mum-Mum First Rice Rusks Vegetable, for example, boast an impressive range of vegetable ingredients – kale, carrot, cabbage and spinach. But combined they make up less than 1.5% of the product (a measly 0.06g in a serve), and they're all in powdered form. Heinz Nutrios Pumpkin contain 4.9% pumpkin – also powdered – but it's still just 0.2g in a serve.

Others, such as Kiddylicious Apple Fruit Wriggles claim to be 'made with real fruit', but a closer look at the ingredients list reveals the bulk of the 'real' fruit is – yes, you guessed it – fruit juice concentrate. And at $1.80 for a 12g pack ($150 per kilo), they're significantly more expensive than your typical 80c supermarket apple ($4.50 per kilo).

Many packaged baby snacks are made from organic ingredients, and the word 'organic' is associated with a range of benefits. But while it's true that these snacks are likely to contain fewer pesticides, their 'organic-ness' doesn't make them more nutritious. "Using organic ingredients is to be applauded," says Stanton, "but there's nothing healthy about organic sugar or organic cornflour."

The word 'yoghurt' also conjures up a healthy image, but in the case of packaged snacks it's certainly misleading.

The 'yoghurt topping' on Only Organic's Yoghurt Kindy Rice Cakes, for example, consists of cane sugar, cocoa butter, skimmed yoghurt powder and full-cream milk powder, changing a perfectly healthy wholegrain rice cake into a snack that's high in saturated fats and sugar. We paid $4 for a 60g pack of these rice cakes, which is five times more expensive than regular, organic rice cakes that you can pick up for less than $2 for a 150g pack.

Rafferty's Garden Yoghurt Buttons are 93.5% yoghurt, but sugar is the third ingredient in this yoghurt, resulting in a product that's more than 60% sugar – reducing the appeal of the 'probiotic cultures' it claims to contain.

To look at, corn flour-based 'hoop', 'loop' and puff-style baby snacks including Organix Goodies, Little Bellies Round-A-Bouts and Heinz Nutrios are reminiscent of mainstream snack and cereal products like Cheetos or Froot Loops.

Unlike the mainstream versions, these baby snacks have minimal added baddies, but what they do have in common is that they offer little in the way of nutritional value.

"These all may be suitable in terms of their fat, sugar and salt content however they are highly processed snacks with minimal fruit and veg," says Ryan. "They are made to look very similar to processed salty snack foods such as Burger Rings. In my opinion, providing these foods for a baby is not ideal as it promotes a taste and preference for these type of snack foods."

Organix Finger Foods Strawberry Baby Biscuits, with their "no junk promise" are yet another example. The ingredients list largely consists of flour, grape juice concentrate, two types of oil (including palm oil) and strawberry powder. The pack claims the biscuits contain "nothing unnecessary", but you could equally argue they contain nothing necessary.

What about fruit and veg pouches?

Squeezy pouches of pureed fruit and veg are not just common first foods for infants, but also popular snacks for babies, toddlers and beyond. Their convenience is undeniable, but giving them to your baby too often can be problematic.

Being easy to consume (babies just need to squeeze and suck from the spout) more food can be eaten in a shorter time. "This can bypass the natural signals that the stomach is full," says Stanton, potentially resulting in over consumption. Ryan warns that if relied on as the only source of fruit and veg, they can also contribute to "a lack of feeding and oral motor skill development, which can in turn impact on language and development skills".

And because they're in puree form they contain less fibre than whole fruit and veg.

An exercise in marketing

Breakey says that giving your baby food without added sugars or salt is ideal, but "is not realistic for the general population". When it comes to these snacks she takes the approach that "nutrition is not an all-or-nothing issue" and that moderation is key, but adds, "Parents are wise if they read the labels re the amount of sugars and salt and choose the most desirable."

While the occasional packaged snack is unlikely to hurt your baby, for the most part these products are unnecessary and a waste of money, according to Stanton and Ryan.

"Most of these snacks consist predominantly of refined carbohydrates with some oil. Others are fruit juice concentrates or fruit powders", says Stanton. "There is nothing essential in them and all create a hazard for developing teeth."

"The marketing strategy for these foods is very strong and difficult to decipher as a parent," says Ryan. "Ultimately all young babies and children need is plain, simple, wholesome foods which are half the price and much healthier."

Stanton agrees. "Babies should eat family foods. The idea that infants need special foods (apart from formula for those who aren't breastfed for the first 12 months) is a marketing exercise and doesn't follow any principles of good nutrition," says Stanton. Her advice? "Ignore all packaged snacks, go to the fruit department and look for suitable fruits in season."

Preparing nutritious snacks and finger foods for your baby isn't always an option, and there's no doubting the convenience of having a packaged snack in your bag as a backup for when you're out and about. Just bear the following in mind when choosing:

"Babies (and all children) need to eat more fruits, vegetables, wholegrains – as real foods, not as puffs, bars and snack foods that bear little resemblance either in appearance or consumption to anything that actually they would recognise as a basic food," says Stanton.

Ryan encourages parents to consider snacks as 'mini' meals, and offer a selection of foods from all food groups. "Keep it simple and easy," she says. "Children do not need fancy products to enjoy what they eat."

For a simple, nutritious snack for babies and toddlers, our experts suggest the following: